At La Union, a classic style of surfing is making a comeback

THERE WERE 10 seconds left in the final heat of the men’s longboarding competition at the Single & Unattached event in Urbiztondo Beach in La Union.

It was an all-locals final featuring four La Union boys battling it out for the top spot. Among them was Roger Casugay, local hero and Southeast Asian Games gold medalist, as well as SEA Games runner-up Rogelio “Jay-R” Esquivel.

The judges’ perch at a balcony in Monaliza Resort was maddeningly silent. In previous heats, they regularly broadcasted each surfer’s score and their current standing, and the points they needed to advance to the next round.

This was relatively new for Single & Unattached.

Thanks to a computerized system that could tabulate their scores on the fly, the five judges could now announce points and rankings as the participants rode in. Every time the announcers’ mics crackled to life, the speakers booming across the reef break, it added an extra layer of pressure to the competitors out there in the surf, biding their time and strategy to get the best waves and impress the panel. 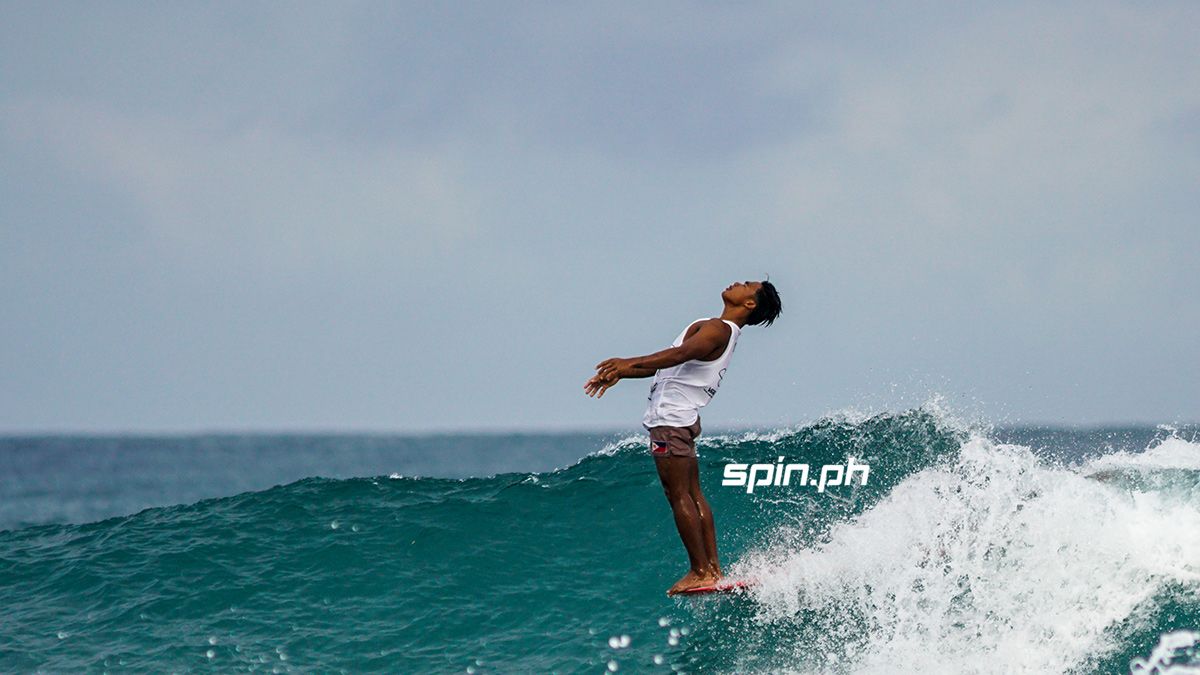 But for this heat, they went old school. Lips sealed, mic silent, except to announce how little time the surfers had left.

At the 10-second countdown, Esquivel rose from his board and began driving hard to shore. He deftly stepped forward and back in a 360 pirouette atop his log, then, as the buzzer sounded, leapt from his board and tried to land on Rico Dumaguin’s. He missed, and fell to the water with a laugh.

It was only later that day, at the awarding ceremony in Clean Beach resort, that he later found out that he’d won first place, eking out a slim 0.25 point lead over Dumaguin.

The Single & Unattached surfing festival is, as its cheeky name suggests, usually timed for Valentine’s. But don’t mind the double meaning in its moniker.

Set up eight years ago by architect and surfer Buji Libarnes, its name technically refers to the type of surfing that goes on in the event: aboard single fin longboards, with no leash attached to keep the board from being swept away from a rider. These surfboards are affectionately called "logs" — a name that brings to mind tree trunks, floating dead in the water. But these boards are anything but lumpen and graceless.

“They are single fin, heavier surfboards, with rounder rails throughout. They have no hard edges, [and are] focused more for style [and] aesthetics rather than performance,” explained shaper Ian Zamora, who specializes in manufacturing single fin longboards out of his shop in Malibu, California.

Zamora, who was born in the Philippines but moved stateside as a teen, has been coming to La Union regularly over most of the past decade, thanks to an invite from Libarnes. At this year’s event, Japanese surfer Akimoto Shohei was riding a Zamora Surf creation. Roger Casugay, too.

When surfing began to break into the mainstream back in the late 1960s, the single fin longboard was cutting edge stuff. But in the past few decades, our collective image of surfing has been defined by the shortboard: nimble teardrops of foam and fiberglass, carving up the glassy green of a wave or slicing nimbly through the water. In contrast, “traditional longboards are heavier, slower, so you have to draw out all your movements,” explained Zamora.

He added: “That's why [longboard riding is] more style-oriented than progressive performance boards. Filipino surfers, they love style. You're all really into style here. Even like, if you see the jeepneys, the tricycle, you always have to kind of bling it out.”

Libarnes, who moved for good to San Juan three years ago, described the style that defines longboard surfing. Because of its size and length, board riding becomes more of a playful art. “Sa shortboard, di ka makapaglakad sa board e,” he told SPIN Life from atop the roofdeck of Vessel, the hip San Juan hostel he runs with his wife Nikki. “So [on the board], it's like a dance. You dance all the way to the nose and back.”

With his fingers, he demonstrated the proper way to do it: index finger and middle finger criss crossing over each other, instead of merely shuffling from side to side. “Mababa score nun pag nag-shuffle ka. Kelangan cross step papunta at paatras.”

At Single & Unattached 2020, 70 percent of a surfer’s score would be determined by those classic moves: nose rides, hang fives, hang tens, or a daring 360 walk across the top of the board. Then 30 percent of the points would come from high-performance stunts you’d typically see on a shortboard.

As head judge Mike Oida told the surfers during the quarterfinals, his voice booming out of the mic as the surfers paddled out: “We're looking for a variety of maneuvers. We're looking for the creativity of how you paint this wave. Make sure you're in the critical part of the wave. Paint it well, dance it well.”

Esquivel considers himself proficient in both shortboard and longboard. “Para sa akin, mas nagsu-surf kasi ako ng shortboard talaga e,” he said before the early morning finals heat, looking out at the gloomy sunrise over a surf that would resolve itself into four-, five-footers — the kind of conditions that made for showstopping finals. “Pero kung yung alon sakto lang, longboard.”

At this year’s SIngle & Unattached, his longboard riding was some kind of magic. In fact, that was what some observers were jokingly calling the crazy, daring backward kicks that he’d sometimes do when dancing on the board: “black magic”.

There was a time Libarnes remembered when longboarding was looked down on by surfers. “Pang beginner lang. Baduy.”

The expectation was that a longboarder would soon graduate into a shortboarder. But Zamora believes that this shouldn’t always be the case.

He added: “So the traditional surfing and the surfboards definitely cater to a wider range of [surfers]... especially since surfing is so young here in the Philippines. It's a good platform.”

For husband and wife team Buji and Nikki Libarnes, the fact that their little event is now on its eighth year is a fact that continually surprises them.

Single & Unattached 2020 wasn’t even supposed to happen. Nikki had just given birth to their first child, and the new parents had no time to organize the event. Thankfully, a core group of log enthusiasts took over the event’s organization for them, bringing dozens of surfers from Siargao, Australia, Hawaii, Japan, South Korea, and of course, locals from San Juan, La Union.

They’d founded the event on a lark. Yes, they wanted to showcase the underappreciated art of longboarding. But they also wanted a lighthearted event in peak San Juan surf season that would be a break from the very serious competitions out there.

But the success of Single & Unattached isn’t happening in a vacuum, said Buji Libarnes. Longboarding is experiencing a resurgence around the world.

He ticks off the longboarding events popping up around the globe in the past few years, all of them with names as quirky as his own event’s. Nine Foot & Single in Bali. Single Fin Mingle in Christchurch, New Zealand. Mexi Log in Mexico. Then there was the legendary, journeyman Duct Tape Invitationals, founded by longboarder Joel Tudor.

The men’s and women’s longboarding champion at Single & Unattached — Esquivel and Siargao’s Aping Agudo — would be invited to the Mexi Log Fest. Meanwhile, in recognition of his heroic act at the SEA Games, Casugay also received an invitation to Single Fin Mingle.

He’s been coming to La Union long enough to remember Casugay as an 11-year-old kid begging him for the candy he always kept in the pocket of his board shorts to chew on while out on the ocean. Now, with Single & Unattached looking forward to a decade of logging, Libarnes is confident that the art of longboarding is alive and well in the shores of La Union.

And if you want to get into longboarding yourself?

“Stick to it,” he said. “Don't jump on a shortboard right away. [It will] teach you style and grace and technique. Nandito kasi ang fundamentals ng good style.”