The popular actor said biking is something he has loved doing since he was eight years old and his passion for the sport hasn't waned a bit. So much so that despite his heavy schedule and commitments, Trillo says the few days he has in his free time is devoted to biking.

It is in these mountainous terrain overlooking Metro Manila, considered the “Mountain Biking Capital” of the country, where Trillo's love affair with biking blossomed. The Kapuso actor said he started with BMX and evolved into mountain bikes. He is currently trying road bikes.

'Lakbay2Love' director Ellen Ongkeko-Marfil said she knows several actors who are also into biking but she decided to stick with Trillo despite the talented actor’s involvement in a big production movie and a TV soap opera at the time Lakbay2Love was supposed to shoot.

Through his manager, Trillo expressed interest in doing the movie despite his tight schedule. However, when they met to discuss the working schedule they discovered that he only had a few days a month to shoot.

Asked how often he gets to go out to ride, Trillo said every chance he gets,“Kapag may free time ako or kahit wala." Even if it’s just inside the village where he lives or, if he has very limited time, on the stationary bike he set up at home.

Playing the role of Jay-R, a forester of humble origins, Trillo explained he wasn’t able to use his own bikes in the movie but was perfectly happy with the bikes provided by co-sponsor Trek.

Trillo’s passion for biking has in fact rubbed off on his co-star Solenn Heussaff who said she rediscovered the joy of biking while playing the character of Lianne, a videographer doing a documentary on the effects of climate change.

With the movie shot on location in scenic locales La Mesa Dam Ecopark, Timberland Heights, Mt. Maranat and Benguet, Trillo found his experience invaluable in assisting his on-screen partner (whom he described as a “willing student”) on biking safety basics and tips since the couple tackled a mixture of mountain trails and road biking.

Asked if there were any surprises during the filming, the 30-year old actress said it had to be the La Mesa Dam since she never realized there was a forest in the middle of a city that was “so close to home."

She added, “Ngayon ko lang nalaman na napakadaming bike types. During the movie we also shot inside a vintage store, “Lahat ng bikes nandoon. Really old ones from the first World War pa and it was so fascinating to see the different kinds of bikes — there was even a special bike made for women kasi naka-skirts sila dati.”

And the most unforgettable scene for her?

“We hiked for 13 hours to shoot one scene in Mt. Aranat. There wasn’t any trail, may tubig pa. We went into this devastated forest, and it was quite shocking, wala na talagang puno. Some of the foresters who lived there were helping to clean out all the weeds and everything. It was very sad to see.”

“For me it was rediscovering biking. That was something you do when you’re a kid. It’s one of the first things your parents teach you. I like to travel and a bike is one of the best ways to get to know a city or a place.”

In fact, the Filipina-French actress was so taken by the experience that she has joined a bike studio Rockwell, Ride Revolution.

“It’s replaced clubbing. It’s like my club: super madilim, there are nice blue lights to help you relax, we have strobes and fun music. There are movements for the arms, the back which is kinda like dance-slash-tae bo movements as well. It’s cycling and we’re doing moves, push-ups on the bike. It’s fun!”

Asked who she considers as a perfect bike companion, Heusaff replied she would like US president Barack Obama, “I’m his fan for the longest time pero kasi recently ko lang na-research yung mga interviews niya, nakakatawa talaga siya! He is so funny and so witty. I love him so much.”

Trillo said he would prefer to pedal with “PNoy,” saying he would hitch his dad on his bike and take the president to see the mountain trails.

Lakbay2Love, touted as “the first bike movie in the Philippines,” will be shown in theaters on February 3. 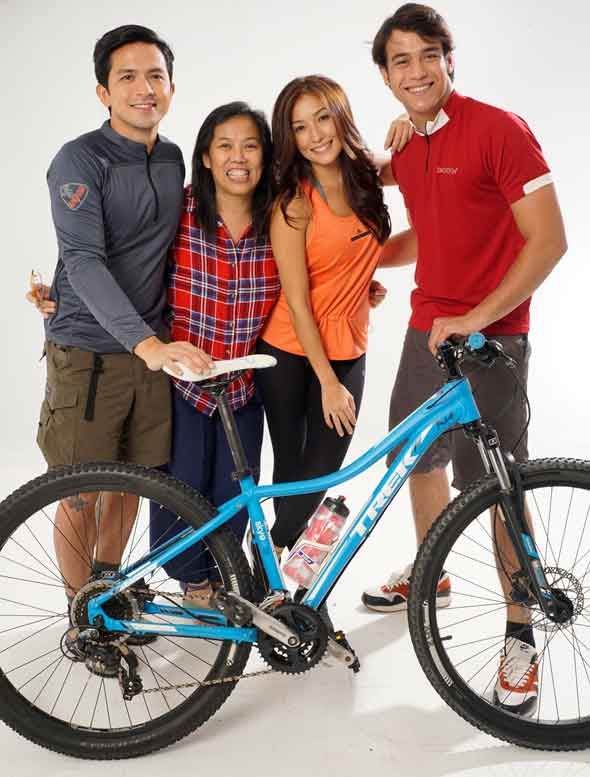