Ten sports documentaries that everyone should see, and 10 others that are definitely worth a look

SPORTS and cinema have an uneasy alliance.

For every "Raging Bull," there are an abundance of flicks that get it wrong when they try to recapture a memorable event or famous athlete. Seriously, how does the compelling life of Babe Ruth produce not one, but two of the greatest stinkers in the history of film-making ("The Babe Ruth Story" AND "The Babe")?

There's another format that serves the genre far better.

No wonder three of the last four Academy Awards in this category went to sports-related films.

With that in mind, here are 10 documentaries that everyone should see (and 10 others that are definitely worth a look): 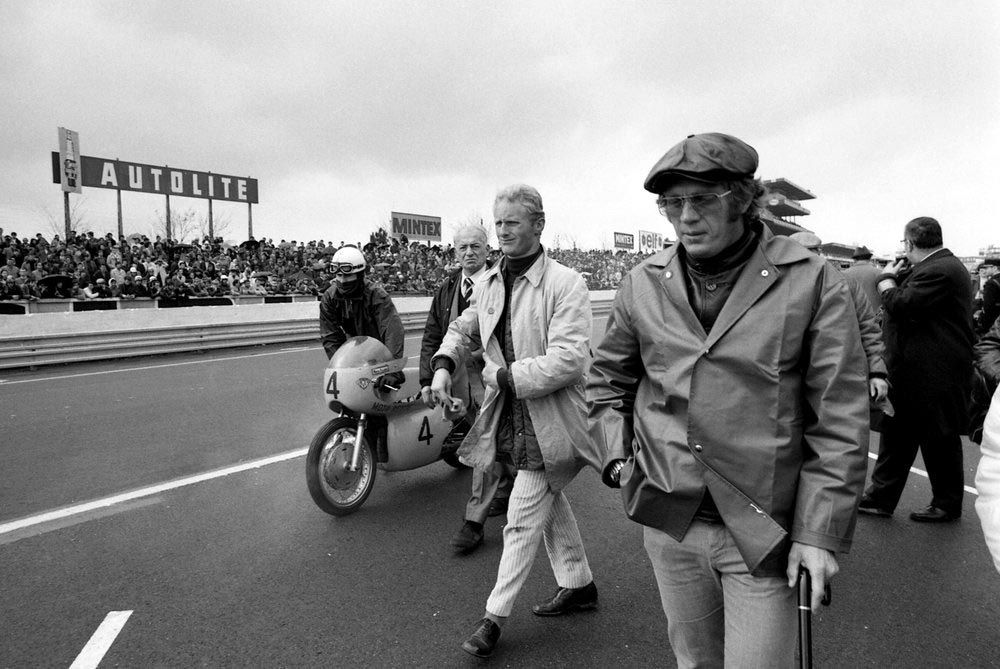 McQueen was at the height of his career (and an actual racer) when he decided to make the ultimate racing film centered on the 24 Hours of Le Mans. Too bad he didn't have a script. The King of Cool was never quite the same after his hubris-fueled making of "Le Mans."

Dock Ellis was a Pittsburgh Pirates pitcher who wore curlers on the field and always spoke his mind. The title refers to the 1970 no-hitter that Ellis claims to have thrown under the influence of LSD, but the story of this baseball iconoclast runs far deeper.

ALSO WORTH WATCHING: Hank Aaron: Chasing The Dream (1995). This chronicling of the Hammer's life as he overcomes racism on the way to breaking baseball's most revered record was nominated for an Academy Award.

If there's any doubt that Paralympic athletes approach their craft with just as much skill, determination and even pettiness as their able-bodied counterparts, this film about the battering-ram sport of wheelchair rugby should put that to rest. An Oscar nominee, it lost to "March of the Penguins."

ALSO WORTH WATCHING: Next Goal Wins (2014). You can't help but cheer for the world's worst soccer teams as American Samoa attempts to overcome the legacy of a 31-0 loss.

The tragic story of Britain's Donald Crowhurst, a quixotic weekend sailor who attempted a non-stop, solo race around the world in 1968. The quest quickly went awry, and the prospect of financial ruin led to his descent into deceit and madness.

ALSO WORTH WATCHING: Maiden (2019). Another excellent sailing film, this one an empowering tale of the first all-female crew to compete in the Whitbread Round the World Race.

It's still jarring to watch the much-chronicled bungling that led to one of sport's darkest days — the killing of 11 Israelis at the 1972 Munich Olympics. The Germans' naive attempts to negotiate with the Palestinian terrorists. The amateurish plans to pull off a rescue. The hopelessly optimistic reports that all had been saved. The first of several Academy Award winners for Best Documentary on our list.

ALSO WORTH WATCHING: The Two Escobars (2010). Perhaps the best entry in ESPN's acclaimed "30 for 30" documentary series looks at drug kingpins fueling the rise of Colombian soccer leading up to the 1994 World Cup.

Ayrton Senna was pure genius behind the wheel of a race car, but this film brilliantly captures the true essence of this mercurial Brazilian through archival footage, interviews and home movies. Most touching is Senna's softer side, as he frets over the future of a homeland as complicated as the man himself.

ALSO WORTH WATCHING: Red Army (2014). The rise and fall of the Soviet dynasty that ruled amateur hockey for more than three decades.

Another Oscar winner, this profile of Alex Honnold's harrowing climb up El Capitan without ropes or safety equipment (known as a free solo) is a compelling dichotomy — edge-of-the-seat footage and a deeply personal story of a rock climber who seems truly at peace only when he's clinging to the side of a mountain, dangling between life and death.

ALSO WORTH WATCHING: The Man Who Skied Down Everest (1975). Japan's Yuichiro Miura takes off from the near the top of the world's tallest peak, after a tragic climb that claimed the lives of six Sherpa guides. An Oscar winner the year before "Rocky" became the first sports-related film to claim the Academy Award for best picture.

You never know what you might find. Filmmaker and cycling enthusiast Bryan Fogel wanted to explore ways to get away with doping. He wound up uncovering a major international scandal -- the Russian doping scheme at the 2014 Winter Olympics. Fogel rightfully received an Academy Award for this important film, after getting a big assist from whistle-blower Grigory Rodchenkov, former head of Russia's anti-doping laboratory.

ALSO WORTH WATCHING: Stop at Nothing: The Lance Armstrong Story (2014). This brutally unflattering portrait of the disgraced cyclist shows how he was willing to crush anyone who got in his way, without the slightest hint of regret. 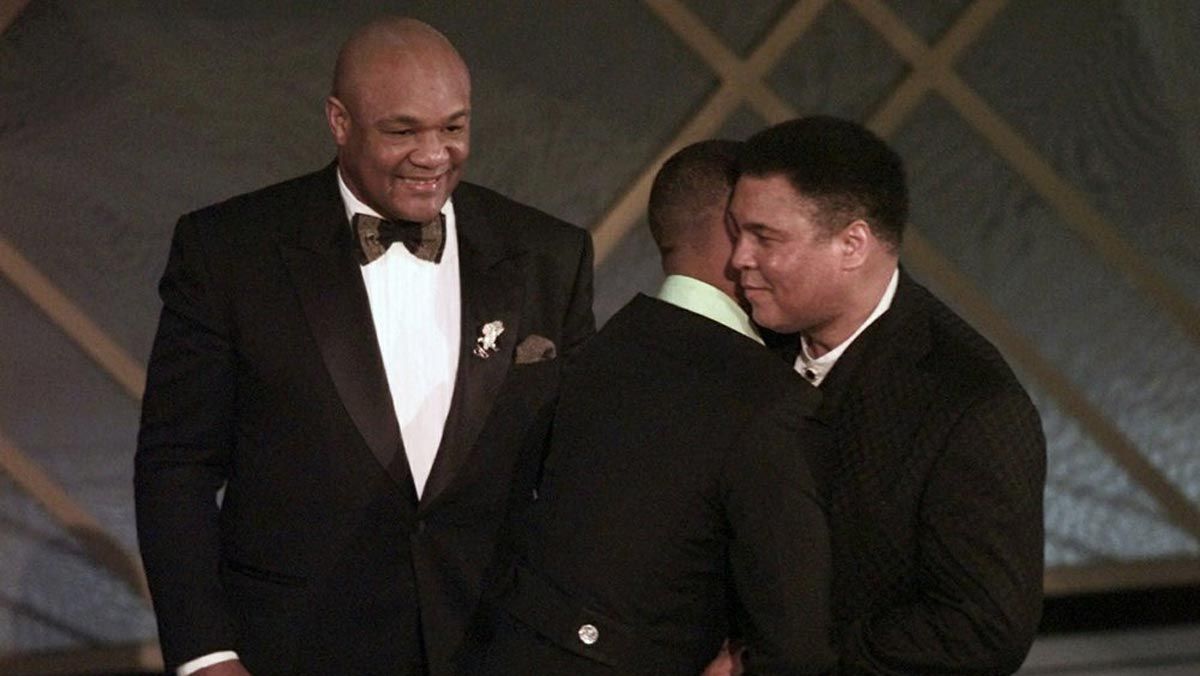 George Foreman looks on as Will Smith gives Muhammad Ali a hug after Ali and Foreman made an appearance on stage after the film "When We Were Kings" was awarded Best Documentary Feature at the 69th Annual Academy Awards in Los Angeles on March 24, 1997.

The 1974 heavyweight title fight between Muhammad Ali and George Foreman — the famed "Rumble In The Jungle" — was a cultural milestone that ran far deeper than boxing. It was a chance for African-Americans to take pride in their ancestral home, even while acknowledging the highly questionable ethics of staging the bout in an impoverished African country ruled by a brutal dictator. Footage from the accompanying music festival, which featured James Brown and B.B King, is an added bonus in yet another Academy Award winner.

ALSO WORTH WATCHING: Tyson (2008). Essentially a preview of Iron Mike's one-man show, it works because of Tyson's brutal honesty and self-reflection. 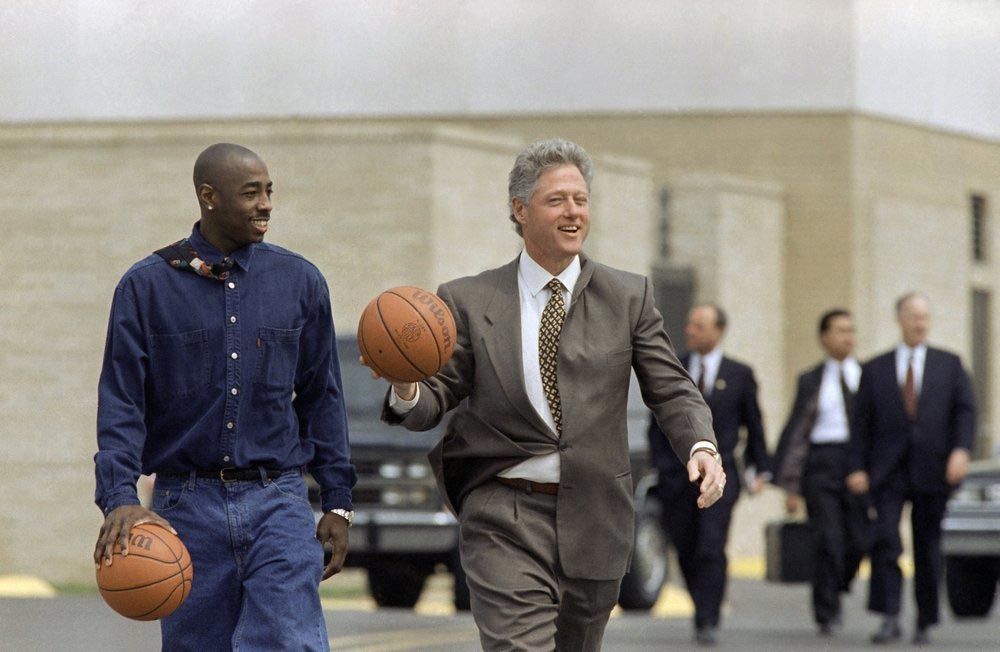 President Bill Clinton walks on the Arkansas State University campus with basketball player Arthur Agee during a visit to the school in Jonesboro, Arkansas, in this April 3, 1995, file photo.

The undisputed king of all sports documentaries, this film wasn't even nominated for an Oscar -- an Academy Award flub that ranks right up there with "Citizen Kane." Five years of filming produced an unforgettable portrait of two African-American high school students hoping to escape their crime-ridden Chicago neighborhoods by making it to the NBA. Far more than just a basketball film, this is brutal expose on society's inequality and poverty's horrific toll.

ALSO WORTH WATCHING: Undefeated (2011). From the same vein as "Hoop Dreams" but burdened a bit by the white-savior approach, this Oscar winner documents an inner-city Memphis high school and the kids who hope to improve their lot in life through a downtrodden football program.

ASTERISK: "O.J.: Made in America" was the Academy Award winner for best documentary of 2016, but it's really a TV docuseries. That excludes it from our list, but it's definitely worth watching if you've got nearly eight hours to spare.

DON'T HOLD UP WELL: "The Endless Summer" and "Jack Johnson." The former is recalled as a seminal surfing documentary, but the racial and sexist stereotyping — especially during stops in Africa — made this 1966 film almost impossible to watch. Same for the 1970 Oscar-nominated documentary about the first black heavyweight champion, which largely normalizes the blatant discrimination Johnson endured but is at least worth a listen for the Miles Davis soundtrack.