THE Philippines is diving’s best kept secret but it won’t be for long.

Dive enthusiasts and marine conservation advocates assembled for the Dive Resort Travel (DRT) Philippines Show at the SM Megamall in Mandaluyong City to promote the wonders of diving in the country.

“The Philippines has some of the best diving in the world. I don’t think the rest of the world is quite aware of that. It’s something that should be embraced by the country itself,” said underwater photographer Mike Bartick, one of the VIP presenters in the event.

The three-day travel fair, which runs from September 9 to 11, aims to promote the country’s position as a premier dive and business hub in Asia as well as sustain global awareness of the country as having the richest marine biodiversity in the world.

Located at the Megatrade Hall, one of the components of the DRT is the dive exhibit that features the country’s top dive destinations, dive equipment, dive resorts, centers/shops, apparel as well as participating national tourism organizations (NTOs).

The event also hosts a series of seminars and workshops to be conducted by international dive experts covering topics such as Underwater Photography, Free and Technical Diving, Marine Life Education and Conservation, Dive Safety Education, and Marine Biodiversity in the Philippines.

Last year’s show attracted 4,569 international visitors from 36 countries with 59 local and international companies taking up 111 booths at the exhibition area. This year’s staging hopes to draw an even bigger crowd.

“It took me years to realize how fortunate I am to have been living (here), to have access to all this wonderful- and not just diving- marine environment that is in our fingertips. I think it’s taken the world a bit of a while to realize what we have here,” said Tuason, co-author of the international award-winning book Anilao. 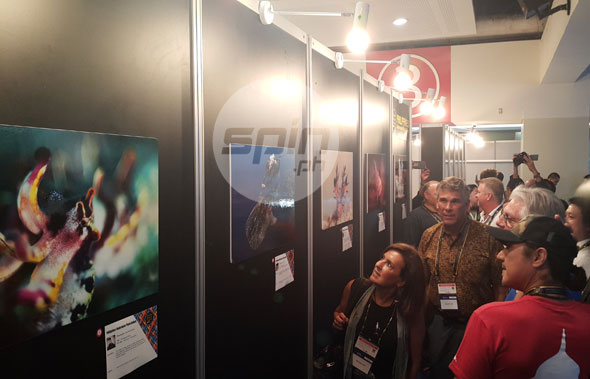