THE biggest trail event of the season, hailed as the race where participants will “run the path of most resistance,” will be held in the jungles of Subic Bay Freeport on April 9.

Now on its fifth year, the Salomon race will feature a race route with new trails designed and opened just for this event. The race will allow the participants to experience Subic’s valleys, abundant hills and rivers and thick forests, while providing a panoramic view of the surrounding countryside.

The major event is the 32km Mountain Run targeted for runners with advanced trail running experience. More for the adrenaline-junkies, this route presents a mixture of different terrains, from asphalt and soil, to rocks, and mud.

Those who finish within the cut-off time of 7 hours will receive a Finisher’s medal.

The 24km Mountain Run is for trail runners who wish to test their endurance. This category presents itself as a ‘level-up’ from the usual trail runs as it includes technical ascents and varying terrain, simulating Skyrunning as well.

The 12km Road to Trail category is targeted for runners with short-distance trail running experience, with the hopes of leveling-up their trail skills to a more technical level. The registration fee is P1,100 which include a race bib, timing chip, Salomon X-trail technical jersey, and a post-race meal. The cut-off time is 2.5 hours.

The 6km Road to Trail Category, lets beginners try the sport of trail running and has a cut-off time of 1.5 hours. Registration is P850.

Bus Shuttle to and from Subic is available for the first 300 registrants, for an additional fee of P600. Race kit distribution is on April 1 to 3, at Salomon Stores. Delivery option is also available via Extribe at (02) 439-3007.

For more information about the race, visit www.salomonxtrailpilipinas.com. 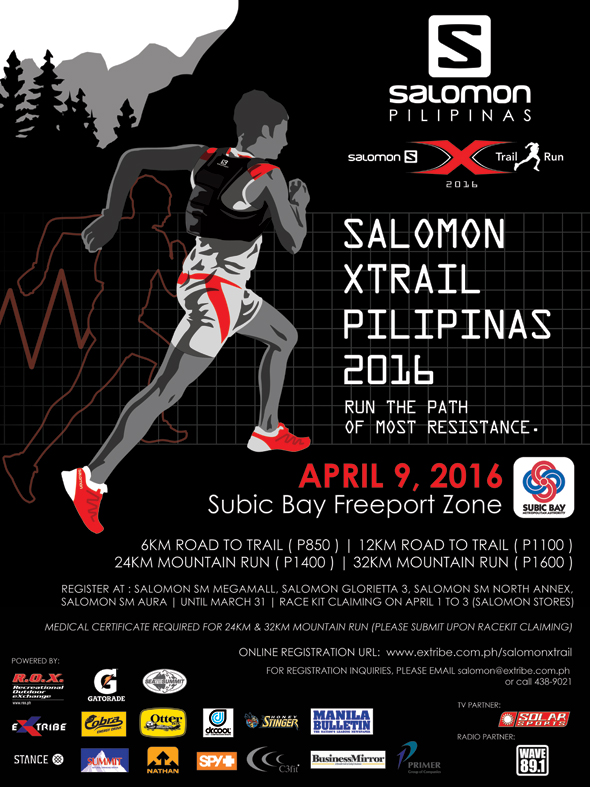