NOW on its second year, a reformatted SM Millionaires Cup will allow more bowlers to strike it rich.

With over P4 million at stake, this year’s tournament is touted as the ‘grandest bowling tournament in Philippine history’ during its official launch at the SM Bowling Center at the Mega Fashion Hall on Tuesday.

From a single division in its inaugural stading, the Millionaires Cup will now have four divisions: Junior Masters (20 years old and below), Senior Masters (50 years old and above)’ Classified Masters (players with Philippine Bowling Congress average of 186 or below) and Open Masters for all bowlers, regardless of average and age.

The annual tournament starts on October 26 and will be held at SM’s different bowling lanes at the Mall of Asia, North Edsa, Megamall, Southmall, Fairview, Cebu and Lanang.

Former bowling champion and SM Bowling division manager CJ Suarez said he expects a minimum of 300 participants from a field of more than 1,000 entries to qualify.

Suarez explained that aspirants can enter more than one category, adding “even Paeng Nepomuceno can join.”

Francis de Leon, president of the Philippine Bowling Congress, said the event will “open the field for everyone” including national team members.

The grand final will be held on December 16 at the soon-to-be-opened bowling facility at SM Clark in Pampanga.

Junior and Master have a top prize of P50,000; the winner of the Classified will receive P500,000 and the Open champion will take home a cool P1 million.

“It’s a challenge to find new talent but SM’s initiative helps draw out new talent,” said de Leon, who is hoping for a return to the glory days of bowling in the 60s to the 80s.

De Leon said with help from SM and the private sector, they would be able to rebuild the sport.

“It can be done, it will be done, in the next couple of years,” he told reporters. 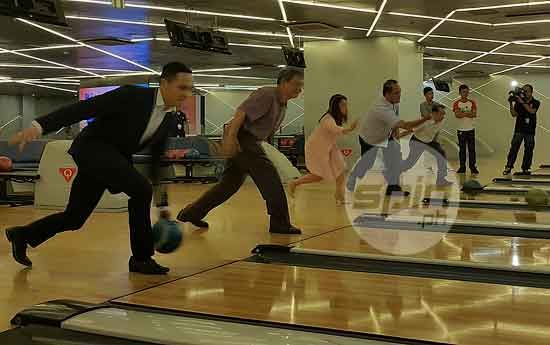