CALVIN Abueva said he no longer owns any vehicles that he now goes around town in a bike.

“Wala na akong sasakyan ngayon kaya kailangan mag-bike,” he said with a hearty laugh as he was about to leave Gilas Pilipinas practice on Monday night.

'The Beast' was joking, of course, but he's no doubt serious about his love for two-wheeled rides which he pedalled from his residence in San Juan all the way to the Meralco gym in Pasig City.

To ease the fears of Alaska management, the enigmatic forward out of San Sebastian did wear the necessary accessories, from helmet to knee pads, to protect himself.

Just like close pal and former Gilas Pilipinas teammate Marc Pingris, the Alaska star said he’s long been hooked to biking even during his younger years.

This is not actually the first time he showed up in Gilas practice – and yes, even at Alaska training – bringing along his mountain bike.

He isn’t aware if people do recognize him while traversing the busy streets of Manila, although he makes sure to acknowledge those who would say hi to him along the way.

So isn't he afraid of the danger he faces while biking around the major thoroughfares of Metro Manila?

That indeed is 'The Beast' talking. 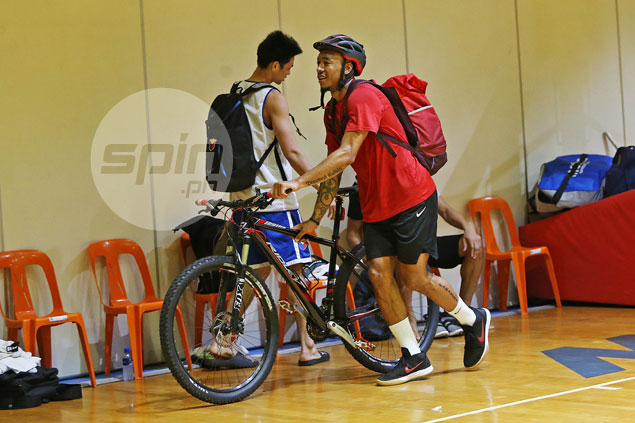