Hamilton beat Mercedes teammate Valtteri Bottas by 5.7 seconds and rushed over to celebrate with the team's engineers and mechanics after the team clinched a record-extending seventh straight constructors' title.

"Seven times champs, something to tell my grandchildren," said Hamilton, who also clinched an extra point for the fastest lap. "It is very overwhelming right now."

Renault driver Daniel Ricciardo placed third for a second podium of an impressive season, while Daniil Kvyat placed a commendable fourth in what is expected to be his last season before being replaced at AlphaTauri.

"It was a bizarre one, I'm not sure what happened to Max but that put us in the fight for a podium," Ricciardo said. "Cyril (Abiteboul) will not be getting another tattoo though." 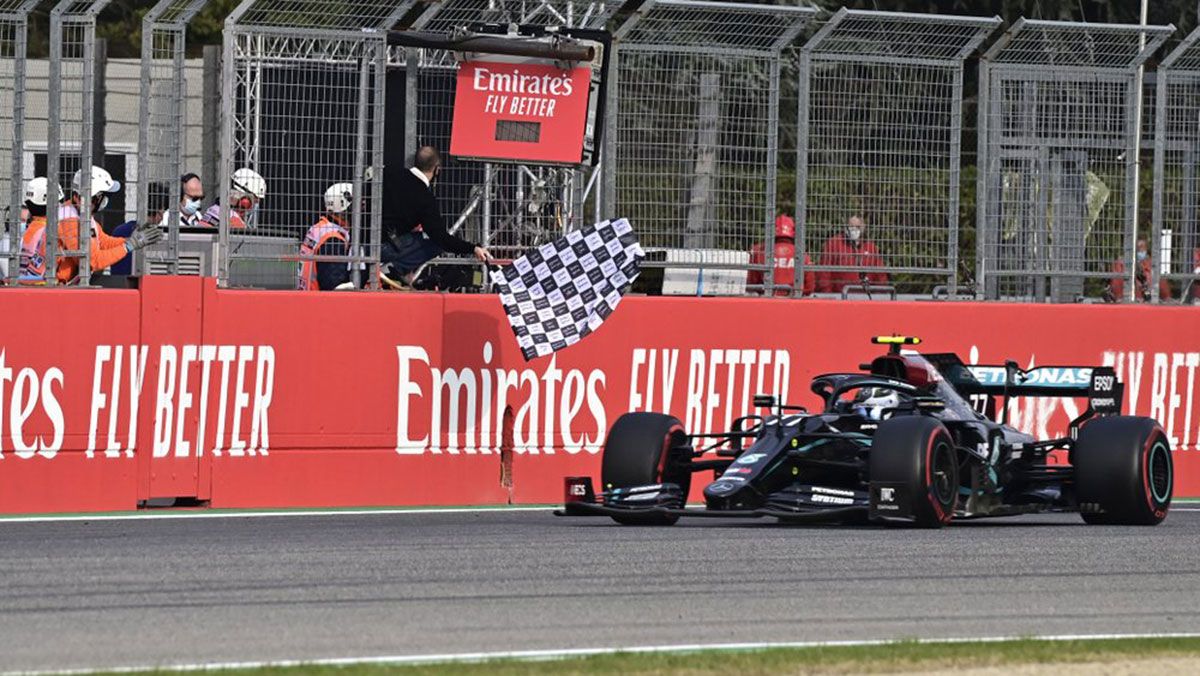 Abiteboul is the team principal and, at the start of the season, agreed to have a tattoo done if Ricciardo finished a race on the podium.

Hamilton started from second on the grid and was overtaken by Max Verstappen, who span off track 11 laps from the end after his rear right tire blew, bringing out the safety car and prompting drivers to change to quicker tires.

Hamilton had missed the first pit window and came in after the other drivers, but his lead was sufficient enough and he came back out about two seconds ahead of Bottas.

The safety car remained on the track following another crash as George Russell lost control and slammed into the track barriers. He was unharmed but upset at his own error while behind a safety car, as he sat on the grass and slapped himself several times on the leg in frustration.

This gave Bottas a chance to pressure Hamilton with six laps left, but Hamilton got away cleanly after the re-start and clocked fastest laps on his way to another comfortable win.

F1 returned to Imola for the first time since 2006, when Michael Schumacher won at the Enzo and Dino Ferrari circuit situated in Italy's auto racing heartland and the site of Ayrton Senna's death from a high-speed crash in 1994.

He is now closing rapidly on matching Schumacher's record seven F1 titles and leads Bottas by 85 points with four races and a maximum of 104 points left. Hamilton can clinch the title at the Turkish GP on Nov. 15.

Bottas took an excellent pole position and made a good start, while Hamilton almost lost another position but managed to block Pierre Gasly, who retired his AlphaTauri on Lap 9.

"It was an exhausting race, the speed we were having to go after a poor start," Hamilton said.

Verstappen pitted to switch from medium to hard tires on Lap 19, with Bottas following on the next lap as his team covered his move. But this played into Hamilton's hands.

He stayed out longer, having asked his team not to bring him in, and set fastest laps before coming in for his tire change with a lead of nearly four seconds ahead of Bottas — hindered by a large piece of debris stuck under his car since Lap 2.

"I think (the damage) made quite a big impact today," Bottas said. "Out of Turn Seven there was the debris, I didn't have time to avoid it."

The gap was larger than expected for Hamilton. He was entering the pits just as a virtual safety car call was made when Esteban Ocon's Renault stalled on the side of the track, meaning drivers had to slow down.

Still, the decision to bring Bottas in right after Verstappen appeared strange, seeing how quick he was going on the medium tires and that the race leader usually has priority over strategy calls.

He then lost second place on Lap 43 when locking his tires entering a turn, allowing Verstappen to zoom past a short time later.

"I was pushing hard to avoid Max getting through," Bottas said. "I had to push over all of my limits which led to a few mistakes.

"Second!" Verstappen said with evident irony on the team radio, such is Mercedes' dominance.

Soon after, it was despondency as he trudged back to the team garage with his race over.

It was another dismal day for four-time F1 champion Sebastian Vettel, who lost out on a points finish after an awful 13-second tire stop and finished 12th.

He is 14th in the standings while teammate Leclerc is fifth and 67 points ahead.

Vettel arrived at Ferrari in 2015 with high hopes that he could win the team's first drivers' title since Kimi Raikkonen in 2007.

But this season Vettel has not finished a race higher than sixth.
___