A long-awaited win, a collision of rivals: The Italian GP did not disappoint

WE WON’T blame you if you’re still on a high from a crazy good race weekend.

The McLarens were tipped to do well on this Italian track, as they’ve shown great straight-line speed all year. But no one ever saw a 1-2 finish coming, yet here they are, emerging as the big winners at Monza.

But how exactly did they do it, and where on earth were the championship rivals? Read on as we recap the 2021 Italian Grand Prix and the days leading up to it.

Ahead of the weekend, F1’s worst-kept secret has finally been confirmed ⏤ Valtteri Bottas will be leaving Mercedes to sign a multi-year deal with Alfa Romeo from 2022 and beyond. This caused a domino effect with the announcement of George Russell filling in the open Mercedes seat, and then his good friend Alex Albon taking his place at Williams. 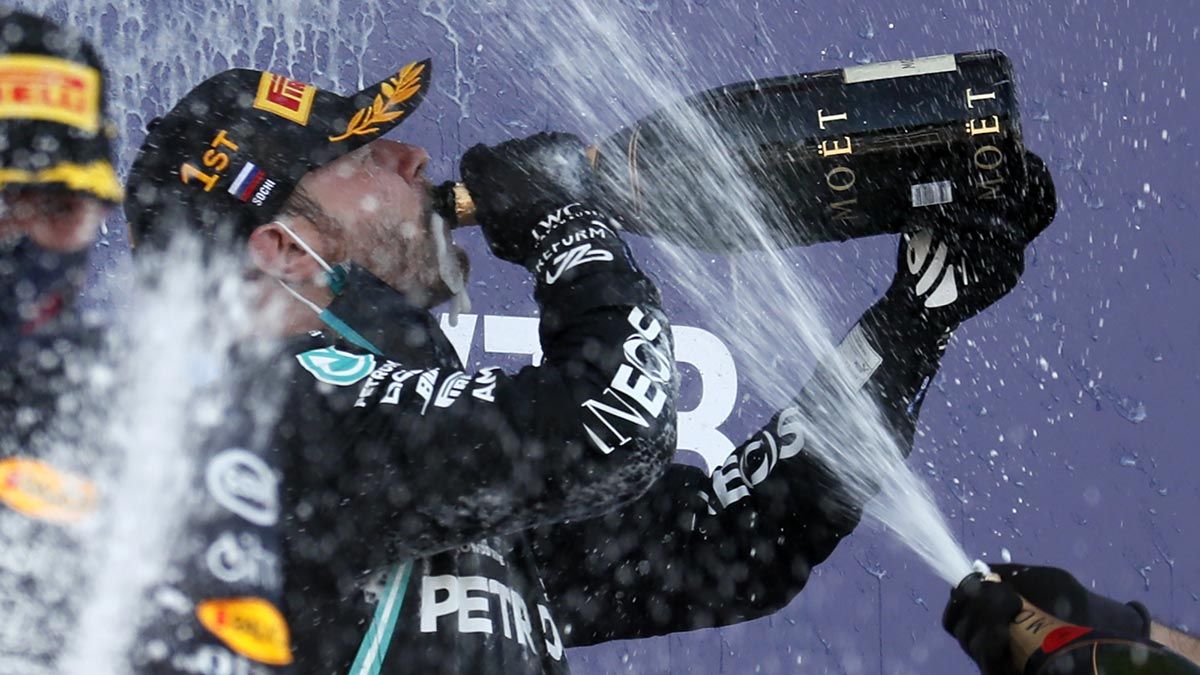 After a year on the sidelines, Red Bull Racing heads helped the Thai driver find a seat outside their teams, given that their roster was already full.

As Williams looked like the best option for him, Mercedes team boss Toto Wolff made his feelings clear about having someone from their main rival getting access to their engine. He hoped that if Albon signs with Williams, he would cut his ties with Red Bull for the time being.

Luckily, it looked like Wolff got his wish as Red Bull addressed the speculation surrounding Albon’s relationship with the team.

They confirmed that Albon was no longer a “Red Bull-contracted driver.” However, they do maintain an option of taking him back in the future if the need shall arise. Even if they didn’t confirm this, it was obvious that the connection’s still there as Albon’s Williams announcement saw him wearing a white AlphaTauri-branded shirt…

Albon’s F1 return caused a lot of buzz on social media, particularly from his mates Russell and McLaren’s Lando Norris, as this was certainly an unexpected move. But his return is very much well-deserved, and it would be exciting to see what he can do with the Grove-based team who, by the looks of it, are on an upward trajectory.

In Sprint Qualifying, a new speed king was crowned

Monza was earlier confirmed to be the location for this year’s second Sprint Qualifying, which added a bit more action for the tifosi.

Or did it really?

A couple of drivers have opposed it before, with Sergio Perez also speaking out as he called Monza’s sprint “boring.”

“There’s nothing happening in it and I don’t see the benefit of having the sprint race… I can imagine it’s also boring for fans, boring for drivers. It doesn’t bring anything, to be honest,” the Mexican frankly said in an interview with Autosport.

Fernando Alonso backed him up on this, although he felt that modifications could be done to improve the race and qualifying format.

He believes that if Friday’s qualifying format would be changed, it would lead to a spicier Sprint session, as he told Motorsport.com: "If qualifying is still six sets of tyres, we will eventually finish in the natural order of the performance of the cars. So in Saturday sprint race, we will start in our position, [and] we will finish in our position.”

Despite the lack of overtaking opportunities, the McLaren duo was able to move up places due to a poor start from defending champion Lewis Hamilton. Unable to get past the McLaren of Norris, Hamilton had to settle for P5 which was bumped up to P4 thanks to Bottas’ engine change.

As Bottas was crowned the new “speed king,” there was a driver that was missing from the mix of Sunday’s possible race leaders.

Last year’s unexpected winner Pierre Gasly, was in no man’s land as he crashed out at the start of the session. This crash badly affected his chances come Sunday as it led to a power unit issue and a DNF classification. His teammate, Yuki Tsunoda, did not finish the race as well due to braking problems.

The rivalry heats up

Daniel Ricciardo started Sunday’s race on the front row for the first time since Abu Dhabi in 2018. He looked poised for a podium finish as he showed great pace all weekend. McLaren fans hoped that his teammate Norris could also join him on the podium as the young Brit was faced with the challenge of defending against Hamilton.

As those with medium tires started pitting, Hamilton stayed out since he was running on hards. This opened the possibility for a win as the previous leaders fell from the pecking order.

However, on lap 26, everything changed.

Despite initial thoughts that Hamilton would not come into the pits, he went for fresher ones halfway through the race in what I assume to be an attempt to keep up with the others in terms of grip. His pit stop went, well, a bit slower than what they hoped for, but not as painstaking as the one his rival, Max Verstappen, had.

As Hamilton exited the pits, he was overtaken by Norris which left him battling Verstappen for track position.

This gave flashbacks of their Silverstone fiasco. We all know how that ended… and no surprise, it happened again.

They went wheel to wheel on the first chicane in an attempt to get ahead of the other but eventually, both lost out — and collided.

“Max hit the sausage kerb, and this brought him back onto the path of Lewis and up into the air as his car came in contact with the Mercedes,” recounts commentator David Croft of the incident.

Just like in Silverstone, debate ran hot about who should take the blame. Verstappen was adamant that Hamilton could have given him more space, but some would argue that Verstappen was being aggressive in such a tight corner.

As for the stewards? They’ve made a decision on the clash and handed the Red Bull star a 3-place grid penalty for causing a collision. He will be serving this in the next race at Sochi.

Nine years since a win, 11 since a 1-2 finish ⏤ McLaren’s journey back to the top step was certainly not just because of a stroke of luck. Sure, Hamilton and Verstappen’s crash had a hand in the victory, but the McLaren duo had a great performance to back them up. 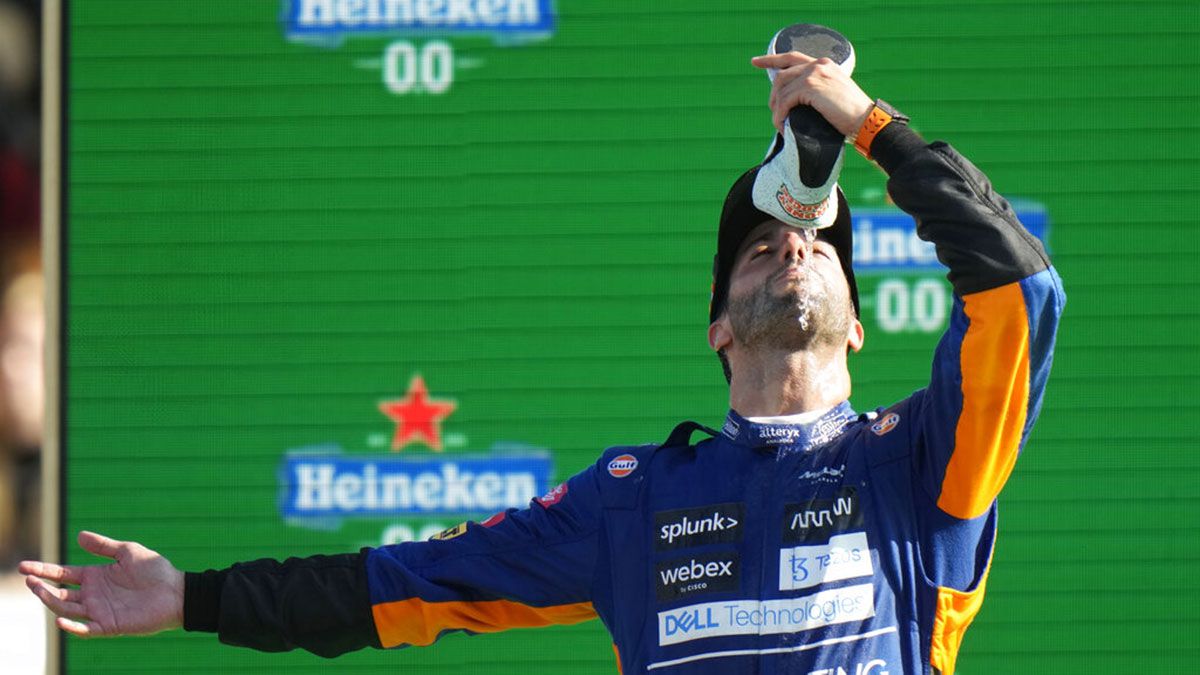 The arrival of Zak Brown and Andreas Seidl to the Woking-based team a couple of years ago proved to be one of the best moves yet as they built this iconic team back up. They changed the whole atmosphere from within and turned McLaren into one of, if not the, most fun teams on the grid.

Their leadership and consistency finally reaped their rewards as McLaren became the first team to score a 1-2 this season. With that, they regain their lead over rival Ferrari and will be leaving Monza with a 45-point haul.

Ricciardo, fondly known as the Honey Badger, proved his doubters wrong as he led the team to victory. After leaving Red Bull, moving to Renault, and moving once more to McLaren, it’s been a while since we last saw him on top and he very much deserved this win after a rocky start to the season.

Keeping his reaction short and sweet, he had one message to everyone who was watching: “I never left” ⏤ a statement indeed, as his on-track performance in Monza did all the talking for him: winner of the race, owner of the fastest lap, and voted by the fans as Driver of the Day.

McLaren showed great team effort all throughout, and Norris contributed heavily to this despite his desire to get the win.

“Four years ago when I joined the team, we’ve been working towards this and we got a 1-2 finally! A good step for us. I’m happy for, of course, Daniel [for] getting the win and me in P2,” said Norris when asked by David Coulthard in a post-race interview.

He added: “You’ve been in that position before where you wanna go for it but I’m also here for the long term. I’m here for the team, and it could’ve ended up like the other two [Hamilton and Verstappen] so yeah, I’m happy for finishing second, [and] for Daniel finishing first place. I’ll have my chance in the future so all good.”

I would also say that Norris’ defense is actually one of the biggest improvements that we have seen from him this year, as he proved his mettle in the sprint race and opening sessions of Sunday.

With Ricciardo finally adjusting to the MCL35M and Norris continuing to mature as a driver, McLaren is definitely on the rise and would be a larger force to be reckoned with come 2022 when the regulations change.

McLaren may have taken the cake here at the Temple of Speed, but credit must be given to all the other notable performances that we’ve seen.

Bottas went on a charge from the back of the grid to help Mercedes in their constructor battle against Red Bull. Since Hamilton was no longer in the field, team strategy was focused on him, and he capitalized on it.

Clawing his way through the cars ahead, he finished the race in P4 but was promoted to P3 after Perez received a 5-second penalty for gaining an unfair advantage on the track.

The two Ferraris also had commendable double points finish in home court, with Charles Leclerc considering this as one of the best drives in his Formula 1 career. The 2019 Italian GP winner was so close to the podium but did not have a fast enough car for it as he was overtaken by Norris, Perez, and Bottas.

Antonio Giovinazzi looked promising in his Alfa Romeo, as the rumors surrounding his replacement within the team have intensified. However, he was unable to convert his great start to a point-scoring finish and he spun during the first lap. This damaged his front wing and compromised the rest of his race.

Meanwhile, Russell scored another set of points for Williams as he finished in P9. The team has now had its best season in 3 years and is comfortably in 8th place in the constructor standings.

With that, here’s the rest of your top 10 in Monza:

That concludes another tripleheader in the season! If travel restrictions would permit, we’d have another one in November before the last two rounds in the Middle East. The championship’s neck and neck, and with all that’s been happening, the battle would surely go down to the wire.

Until then, we’ll see you on September 24-26 for the Russian Grand Prix.