BY the start of February, there were already around 50 cases of COVID-19 in Singapore — the highest number of cases outside of China at the time.

Based on its previous, painful experience with SARS back in 2003 (33 people had died during that epidemic), the Singaporean health ministry was already releasing its available case data to the public in an effort to contain the disease.

It was then that ZP Lee, the founder of a coding school in the small island state, decided to scrape that data and turn it into an easy-to-understand COVID-19 tracker.

When he was starting to develop his site, he was scared his site would be shut down by officials, he told the LA Times.

But, the newspaper wrote, when authorities learned he was only using publicly available information, they left him alone.

The result of Lee’s work is an analytics dashboard that, compared to many other similar trackers around the globe, is “stupendously much cleaner and easier to navigate, and vastly more insightful,” according to the MIT Technology Review.

The dashboard, which you can access at co.vid19.sg, is a gold mine of data.

Naturally, it provides a general overview of the number of cases, tracking them over time. It also breaks them down by age, gender, and source. For those cases in the hospital, it shows data on the number of days each patient has spent inside the facility.

And then, there is the interactive "Network Graph," which, when possible, tracks all the epidemiological connections each case has with each other, as well as their known disease clusters (that is, the place where they most likely contracted SARS-CoV-2, as the virus is officially known).

A month later, the co.vid19.sg site was fully up and running.

Meanwhile, when the first cases of local transmission were reported in Manila, Singapore-based OFW Ralph T. Ceriaco began to code, in his spare time, another COVID-19 tracker — but for the Philippines.

“At the onset of local transmission, consolidated data were rather sparse,” the team behind covid19ph.com told SPIN Life in an email interview. “The thought process was to be a part of the solution. How? By simply making available consolidated data at its simplest and most comprehensible manner as soon as possible.”

The goal — as with all trackers of this type — was to provide the public with an easy-to-understand repackaging of all the official health data on the web. The thinking goes: If you know how many cases there are in your country, and where these cases can be found, and how these cases are connected, then you would have a public that is better informed and better able to deal with the crisis.

“With availability of factual and understandable data, the hope was to help lessen confusion,” said the team.

Ceriaco was also thinking of OFWs like himself, who can use the tracker to monitor their situation at home. 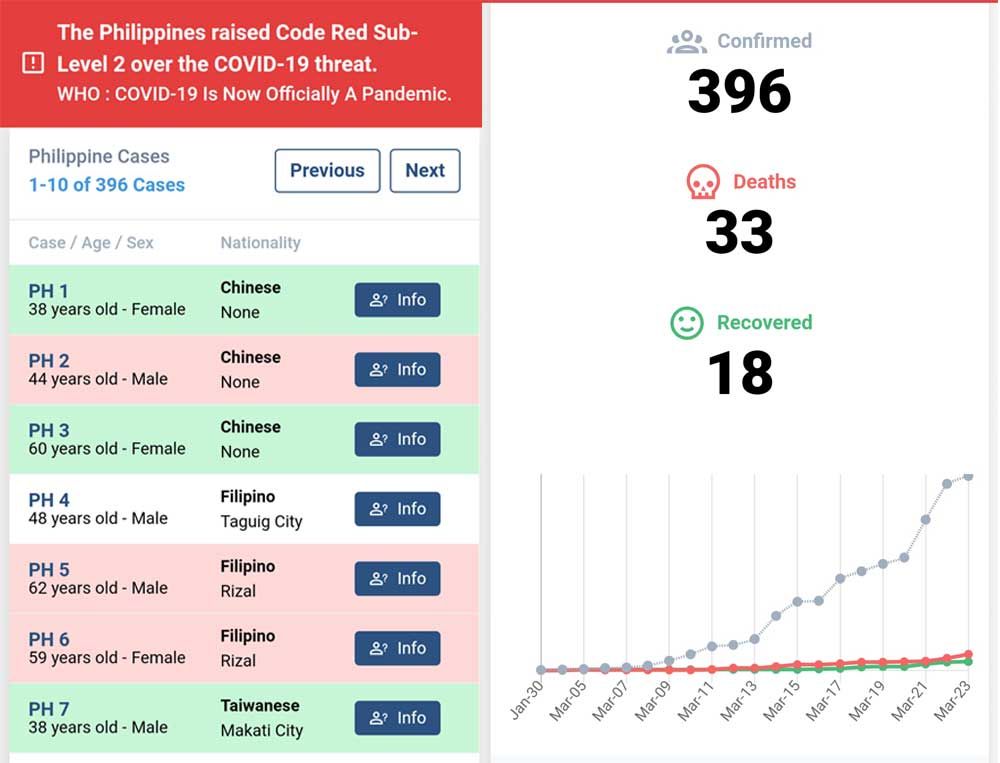 Their site displays a timeline of recorded cases, a database of all cases, and informational bulletins released by the Department of Health (DOH). It also has a “Prevention” section exported from a World Health Organization advisory.

At the time they began work on the site, the covid19ph.com team was not aware that the DOH was also working on its own site, a dashboard that would eventually become ncovtracker.doh.gov.ph (which seems to be built on the same framework as Johns Hopkins University’s global COVID-19 tracker, coronavirus.jhu.edu/map.html).

Still, they believe their site has one major advantage: It’s mobile-friendly.

“Most Filipinos [do] not [have desktops or laptops],” said the team. “Again, the aim is to make available data that is easily accessible by the general populace.”

A screenshot they sent to SPIN Life of their Google Analytics stats proves the success of their volunteer site: more than 525,000 views since the site was first launched.

As of right now, the covid19ph.com team is looking for volunteers to help encode data — which, unfortunately, needs to be done manually as the Department of Health reports come in.

“We [are] in dire need to hasten data availability,” the team said. They are still working day jobs, and cannot monitor news around the clock.

The team assured SPIN Life, however, they are looking into developing a version 2.0, where reports from the DOH would be “automatically pulled” into the site. They are also looking into some form of barangay-level log-in implementation.

For this version 2.0, they are looking at taking some of the code and the features from ZP Lee’s own Singaporean site.

Lee, for his part, has been working on exporting his tracker to other countries around the globe. In a message on the site, Lee writes, “I believe that sharing information can be very helpful in the fight against COVID-19. I'm looking for volunteers/content moderators/admins etc to help me launch this in your country.”

On March 18, Lee tweeted that a Taiwanese version of his site is ready to be launched soon.

Both Singapore and a similarly tech-driven country, South Korea, have been recognized for the wealth of publicly available data in the fight against COVID-19. (Though various human rights and data privacy groups around the globe have criticized this, especially since personal information about confirmed cases could lead to stigma.)

In a tweet, the Singaporean programmer credited the rich information on the co.vid19.sg site to Singapore’s “data transparency,” which he called “truly impressive.”

In the end, however, no matter how pretty or optimized your dashboard, it’s only as good as the data that’s out there.