FOR FILIPINO fans, the 2021 Turkish GP was the first race broadcast under Premier Sports after the closure of Fox Sports Asia earlier this month. Prior to this, a lot have expressed their worry on how they could continue watching the races on TV, but their prayers were answered when local cable operators presented the new channel.

At the 16th round of the 2021 season, F1 returned to the circuit where Lewis Hamilton won his 7th world championship and equaled the previous record that was set by Michael Schumacher.

Rain has become a familiar sight on racetracks this year, and Turkey’s Istanbul Park was not an exception. With a mix of both wet and dry conditions throughout the weekend, several drivers have spun, struggled with grip, and intermediates were the tire preference for the race.

The biggest news ahead of the week was that Hamilton would be handed a 10-place grid penalty for taking a new internal combustion engine. This meant that, despite setting the fastest time in qualifying, his pole was void and he started the race from 11th on the grid. 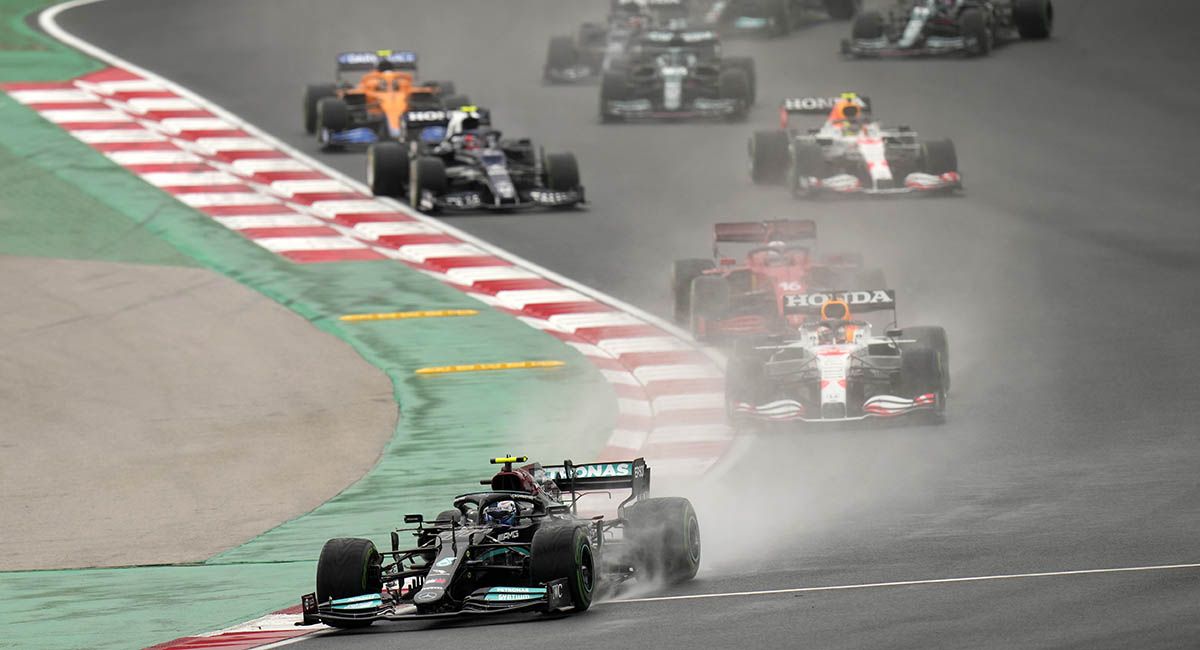 With that, his teammate, Valtteri Bottas, lined up alongside Max Verstappen on the front row. It was interesting to see what Hamilton could do from that position but knowing him, it was no surprise to see him storming through the field after just a couple of laps.

Fernando Alonso was set for a good race before coming in contact with Pierre Gasly’s AlphaTauri on the first lap. After spinning, Alonso dropped down 10 places and Gasly was handed a 5-second time penalty which he served during his first pitstop. Later on, Alonso was handed a similar penalty for colliding with Mick Schumacher.

The rookie from Haas had a commendable performance in qualifying which allowed him to start at P14, his highest for this season. However, he was unable to convert this into a better result on Sunday, as he finished the race in P19.

Ferrari looked fast in all practice sessions and Charles Leclerc was poised for a podium finish after starting the race in P3. He had the pace to maintain this position and had planned to finish the race without any change of tires — which proved to be a bad decision as he missed out on the podium after a late call for a pitstop. His teammate, Carlos Sainz, was zooming through the field and by going up 11 places, he won the Driver of the Day distinction.

Meanwhile, McLaren, Ferrari’s rival for 3rd in the Constructor’s, had quite an uneventful weekend as Lando Norris finished in P7 and Daniel Ricciardo finished in P13 after starting from P20 due to changes made in some parts of his power unit.

Many were excited to see how Norris would bounce back after the tragic race in Sochi where the young Brit could have had his first F1 win. However, this track wasn’t the most suitable for the MCL35M as Norris admitted after qualifying that their car does struggle with long corners such as in Turkey and Zandvoort — where they finished in P10 and P11.

The 2020 Turkish GP pole-sitter, Lance Stroll, finished this year’s race in the same position where he qualified, which was in P9. Sebastian Vettel, Stroll’s Aston Martin teammate, who finished on the podium last year, had a difficult race and spun on track after being the first to try on slicks. He immediately had to go back to the pits which cost him lots of time and track position. Ultimately, he finished in P18.

If I’m being honest, this wasn’t the most exciting race of the season and Verstappen shared the same thoughts by jokingly saying in a post-race interview that the hardest part was to “stay awake” throughout the 58 laps. But hey, at least it wasn’t a completely boring processional race, right?

The most action that we got was the wheel-to-wheel battle between Hamilton and Sergio Perez on the 35th lap, with the latter emerging as the victor. Other than that, we had the drama between Gasly and Alonso along with the insane overtakes by Sainz who started from 19th on the grid after taking a new power unit.

A notable mention for me would be Alpine’s Esteban Ocon who finished on the same tires that he started the race with, which meant that he did not go for a pitstop! Props to Ocon; despite running 58 laps on used intermediates, he still managed to finish in P10.

Hamilton intended to do the same thing as Ocon, but was called by the team to pit around the same time Leclerc did, and this cost the 7-time world champion a possible podium finish. Hamilton was certainly not happy with this, and his frustration was felt on the team radio.

“I think probably in hindsight, I should have either stayed out or come in much earlier, because when you come in with eight laps to go you don’t have time to go through the graining phase of that medium tyre on a drying track. So then I went through this whole sliding phase where I nearly lost more positions. So yes, a bit frustrating, but it is what it is,” said Hamilton in a post-race interview.

As Bottas bagged his first win of the season, he was certainly very happy with the result and Mercedes’ team boss Toto Wolff rated his performance a 10/10.

With Verstappen finishing in 2nd and his teammate, Perez, finishing in 3rd, it seemed like their stunning livery tribute for Honda brought them good luck and debunked the idea that one-off liveries were cursed. This podium finish also helped Verstappen in his title fight against Hamilton, with the Red Bull driver regaining the lead by a 6-point advantage.

Comments about this individual race aside, it’s been a while since we last saw a championship battle that was this intense, which explains why a lot have been tuning in to this particular season.

With just 6 races left, there’s really no room for error — especially from the title rivals. The pressure is on and the gloves are off. Who’s your championship bet? Comment down below and let us know as we’d be seeing you after two weeks when the F1 season resumes in the Circuit of the Americas. Oh, and get your body clocks ready: with the time difference between USA and the Philippines, it’s going to start 1 a.m.!