The Daytona 500 winner was out front but out of fresh tires and trying to hang on when he got unintended help from Joe Gibbs Racing teammate Kyle Busch. The reigning Cup champion caused Chase Elliott to crash eight laps earlier to bring out the caution.

A furious Elliott waited for Busch on the apron of the track and flipped Busch the middle finger as he passed. As Nascar cleaned the track, it started to rain and the cars were called to pit road under red-flag.

It was an already active evening at "The Track Too Tough To Tame" as drivers were racing against the field and the weather. As the drivers sat in their cars waiting for Nascar to pull the plug, a handful of Elliott's crew members sat on the pit wall staring down Busch. 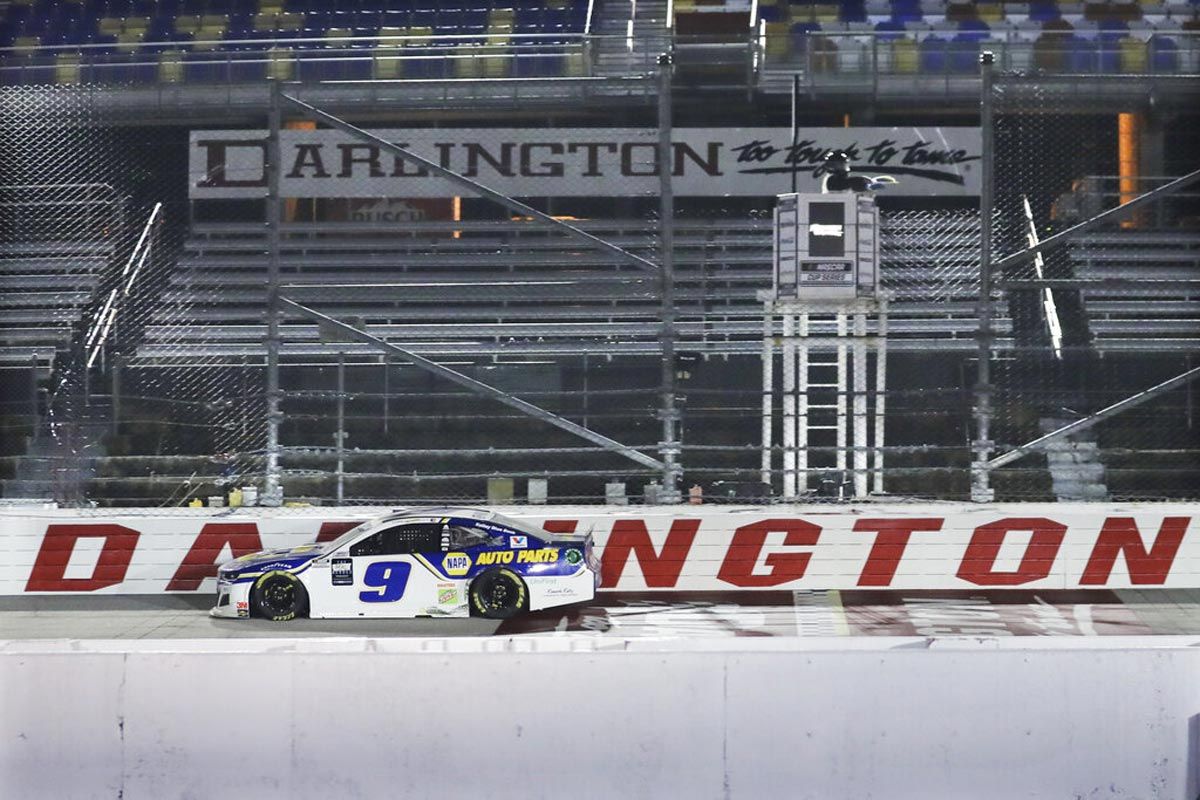 One of Busch's crew members sat between them on the wall and Nascar eventually ordered everyone back over the wall. Eight minutes later, the race was called and Busch was greeted by Alan Gustafson, Elliott's crew chief and Busch's former crew chief when he drove for Hendrick Motorsports, for a conversation between two masked competitors.

Busch immediately copped to the error.

"There's no question I made a mistake and just misjudged the gap," Busch said. "They're upset, they're mad. I'm not just going to fix and we're going to go have ice cream tomorrow. They're going to dwell on it and I'm sure there are repercussions of it I'm going to have down the road."

Meanwhile, a fox was scampering across the deserted track and Hamlin, wearing a mask that depicted his actual smile, was having a muted celebration in the rain. 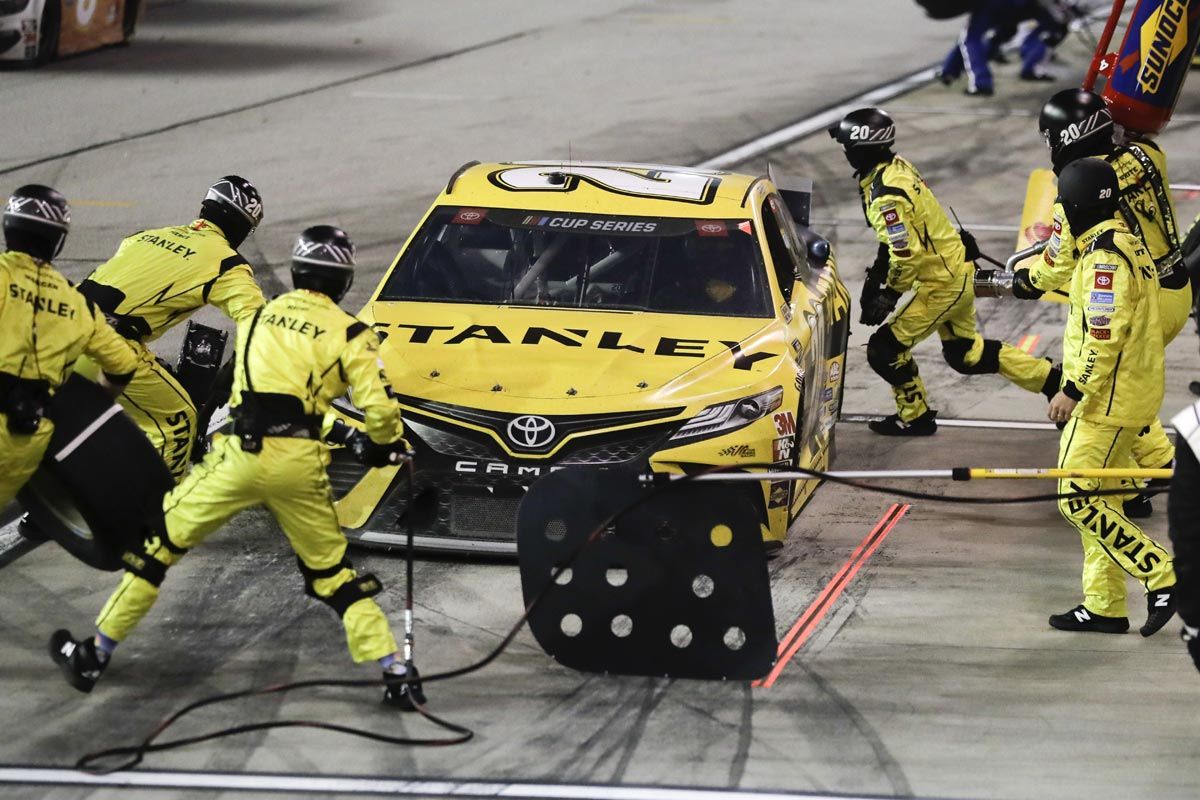 He walked to victory lane under a large black umbrella. It was a 1-2 finish for Joe Gibbs Racing and Toyota. Hamlin has won three times at Darlington and has two wins this season.

"I got my happy face on. Made sure I brought it with me," Hamlin said of his mask. He said he also had masks made with a "sad face" but only brought the smiling masks to a track he counts among his favorite.

Hamlin thought he was in good shape when he made his last pit stop but a caution by Clint Bowyer, who won the first two stages of the race, jumbled the strategy with 34 laps remaining.

Hamlin had no choice but to stay out on the track, and his crew chief Chris Gabehart told him over the radio, "you ain't going to like it, but we're going to have to eat our vegetables here." 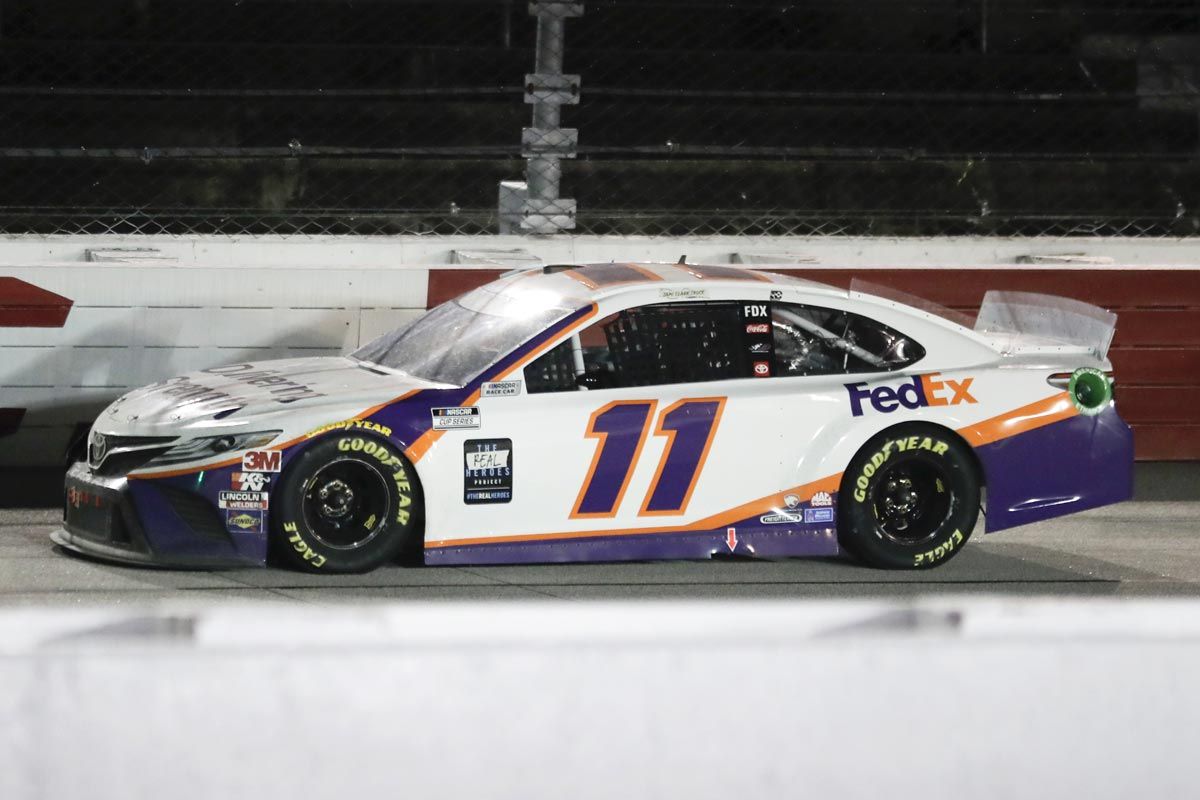 Hamlin, the leader because he didn't pit on the restart with 29 to go, only had to hold off traffic for one lap before the Busch and Elliott collision. The rain then came and Hamlin earned the trophy.

"It's a driver's race track," he said. "You can do different things to make (the car) handle. We got it right."

The race marked the first time in NASCAR history that the Cup Series had two points-paying races at the same track in one week.

The start of NASCAR's second race back during the coronavirus pandemic was moved up an hour because of poor weather, but that was then delayed nearly 90 minutes because it rained most of the day.

When the action finally began, the 310-mile affair was spirited from start to finish because drivers were unsure if they were racing to the halfway point — the mark a race becomes official — or the distance.

NASCAR returned to action Sunday at Darlington after a 10 weeks off by using a a strict health protocol and limiting those in attendance to only the most essential for conducting a race.

Health screenings were required to enter the track and each of the 40 cars were allowed just 16 team members.

Fox Sports again broadcast the race primarily from a studio in Charlotte, North Carolina, with just one pit reporter at Darlington. For its prerace show, drivers used varying technology to make brief appearances while sitting alone in their motorhomes.

Drivers had to travel to the track alone, pass through a health screening and then isolate before the race. They are required to wear face masks.

NASCAR has an ambitious return plan of 20 races spanning its three national series between Sunday's return and June 21. Spectators are not expected to be permitted to any of the events in this span.

Rain disrupted the schedule Tuesday night when the Xfinity Series was washed out. That race is now scheduled to be held Thursday afternoon.