Charles Leclerc bounces back in Austria for third win of season

SPIELBERG, Austria — Charles Leclerc had kept putting on a brave face as success escaped him and tensions mounted at Ferrari in a run of five F1 races without a podium spot for the driver. After winning the Austrian Grand Prix on Sunday, Leclerc's beaming smile was back.

Leclerc faced a big challenge in the closing laps as his throttle was not working properly, making it more difficult to control his speed into turns.

See Verstappen on pole in Austrian GP as both Hamilton, Russell crash

It was a different story for his Ferrari teammate Carlos Sainz Jr., whose hopes of a second-place finish in Austria dramatically ended when his engine blew as he was catching Formula One world champion Max Verstappen's Red Bull. Sainz got out as flames were licking his race suit. Unharmed, he sat on the grass to contemplate his bad luck.

Sainz won last weekend at the British GP, where Leclerc dropped from first to fourth. After missing out there, Leclerc bounced back to hold off Verstappen in Austria by 1.5 seconds for a third win this season.

It was Leclerc's first victory since the Australian GP in April. After second place at the United States GP in May, Leclerc's five races included two DNFs, two fourth places and one fifth.

"I kept being optimistic, but obviously hard races after hard races it felt like everything was against me," said Leclerc, who also won the Bahrain GP. "Finally we had a breakthrough and it really feels good to have a win again."

Leclerc said it was "very stressful" as the throttle issue persisted.

"I definitely needed that win, the last five races have been incredibly difficult," the Monaco driver said. "It's great that we're finally having a normal race on my side."

A relieved Leclerc sang along as the anthem played on the podium, then engaged in a Champagne-spraying joust with Verstappen. Leclerc didn't forget Ferrari's race director Laurent Mekies, either, dousing him with bubbly.

The mutual respect between Verstappen and Leclerc — both 24 years old and former fierce karting rivals — is growing.

"You guys were so fast today," Verstappen said in the post-race cool down room.

Leclerc moved up to second overall but is still a distant 38 points behind Verstappen — 208 vs. 170 — with Red Bull's Sergio Perez dropping to third. He retired after 26 of 71 laps after being hit on the opening lap when trying to overtake George Russell's Mercedes. 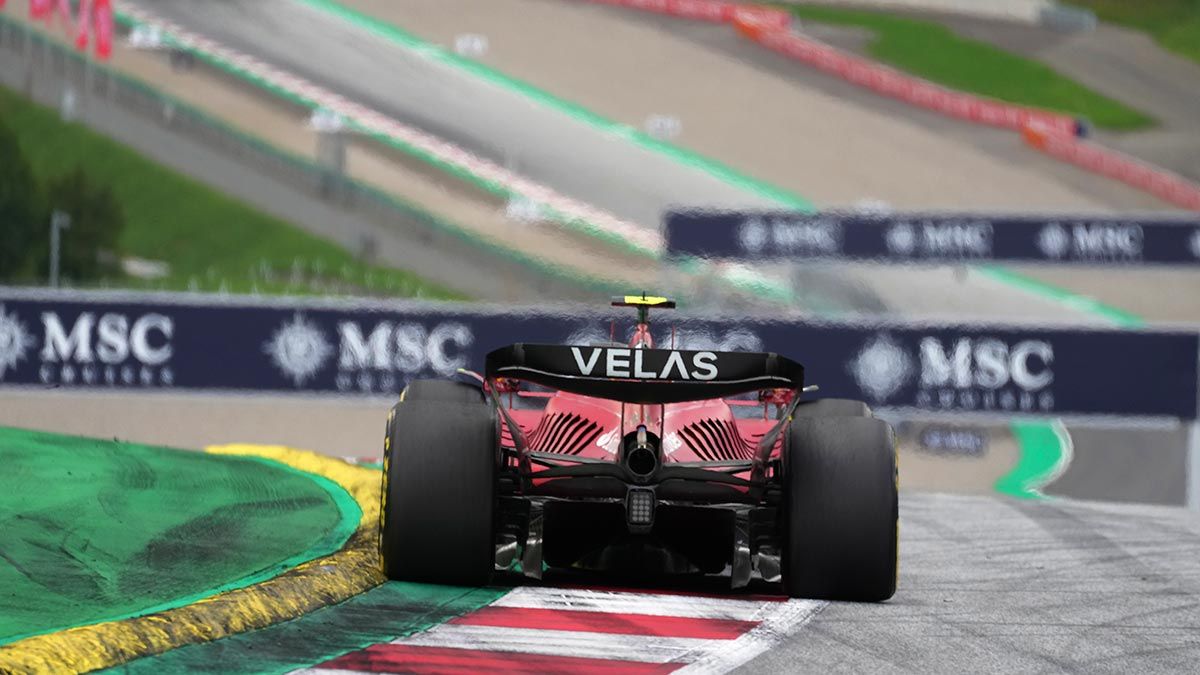 Charles Leclerc is now 38 points behind Max Verstappen in the driver standings.

Verstappen picked up a bonus point for fastest lap to go with the eight points he took by winning Saturday's sprint race.

Lewis Hamilton finished third for Mercedes and secured a third straight podium place. Russell got a five-second time penalty for the Perez incident but placed fourth. Even more impressive since Mercedes had to repair both cars after a late crash in Friday's sprint qualifying.

"Those are great points," Hamilton said. "So thankful to the team for working so hard."

After cutting out on Lap 58, Sainz's car was burning and started to slide backward in the gravel as a marshal rushed toward it with a fire extinguisher.

"I saw the car was catching fire and at the same time I was trying to push the brake," Sainz said. "I was calling the marshals to put something on the tires to stop the car rolling down. At some point, there was so much fire I just had to get out."

He thinks things could have been done more quickly.

"It's something we could look at," Sainz said. "It wasn't the easiest situation."

The incident brought out a virtual safety car, causing Leclerc and Verstappen to change to fresh tires in case a real safety car came out.

Leclerc's fifth career victory was one of his best. It was also a very welcome one after much confusion over team decisions.

Leclerc was exasperated at the British GP when his team kept him out on track rather than pit him for new tires during a late safety car, leading to Sainz's first victory and discussion about team divisions within Ferrari.

This time Sainz was left with a bitter taste.

Seconds later he had more pressing matters as the flames rose.

Verstappen never really looked like getting his seventh win of the season and his fifth overall at the Red Bull Ring in Spielberg, where legions of orange-clad fans roared him on at his team's home race.

"It's just a shame I couldn't give them a win today," he said. "We suffered with the tires. Still, second place is a good result."

Esteban Ocon capped his 100th F1 race with fifth for Alpine ahead of Mick Schumacher, who is on a roll with Haas after securing his first career points with eighth place at Silverstone.

Leclerc had already overtaken Verstappen twice with clean passes to control the race. But with around 20 laps to go Verstappen led again after Ferrari pitted Leclerc and Sainz in quick succession.

But with only a small lead Verstappen was unable to hold out for long and Leclerc overtook smoothly.

Verstappen had started from pole ahead of Leclerc and Sainz. They almost collided as they chased each other in Saturday's sprint race. By late Sunday afternoon, Sainz was being consoled in the team garage.

Pierre Gasly's AlphaTauri bumped Sebastian Vettel's Aston Martin into the gravel and got a five-second penalty. After emerging unscratched from a horror crash at the British GP, Chinese driver Zhou Guanyu placed 14th for Alfa Romeo.