IT'LL be 15 years this October since LeBron James stepped out for his first NBA game. It was on the evening of October 29, 2003, to be specific, when the man who would call himself King scored 25 points for Cleveland against Sacramento, and in doing so, set a record for the most points scored by a prep-to-pro player in his debut game.

James has come so far since that day, and the whole way, he’s been lacing up in his own signature Nikes—at least one new model every year. Then in 2015, he signed the company’s largest-ever single-athlete deal to become the first-ever player with a lifetime Nike endorsement.

That means that his legacy will continue to unfold with a Swoosh on his feet, and that there won’t likely be a shortage of new LeBron sneakers in the foreseeable future.

So look back at how James’ mainline signature sneakers have evolved through the years so far, just as he has. 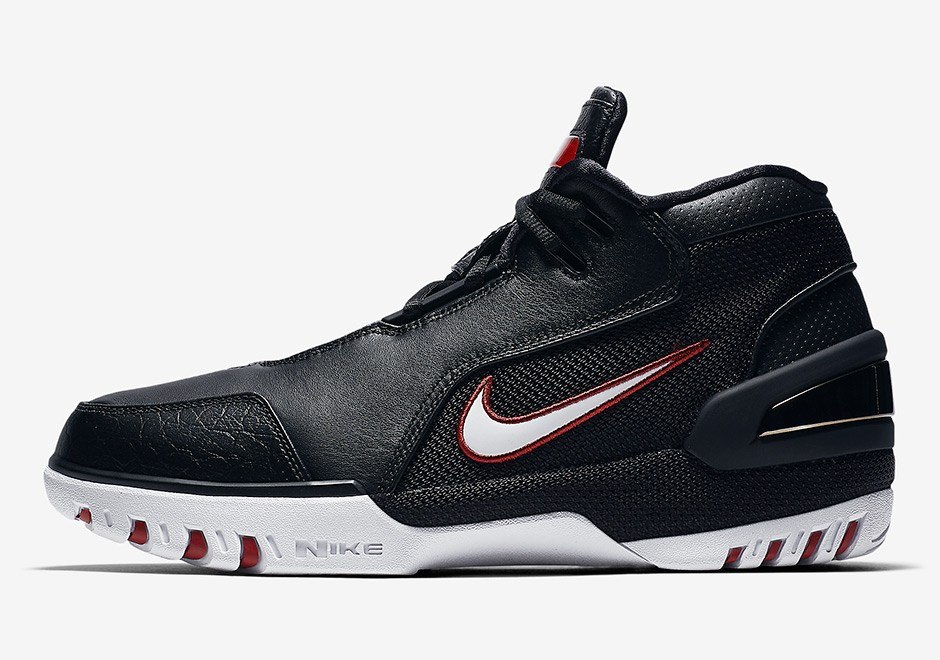 James’ first Nikes didn’t initially bear his name, but they were certainly made for him. The design was even inspired by his Hummer H2, which was given to him by his mother as an 18th birthday gift (that invited a lot of unwanted attention). The Zoom Generation would later be referred to as the Lebron 1, and to this day remains a favorite among collectors for its chunky silhouette with clean lines. It’s also the only LeBron sneaker that was worked on by legendary Nike designer Tinker Hatfield (with the help of Eric Avar and Aaron Cooper).
Zoom LeBron 2 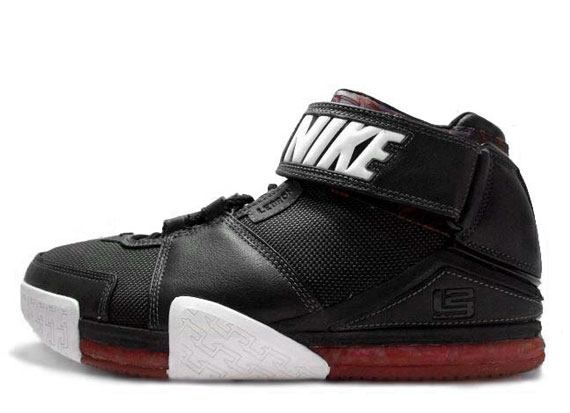 His second signature sneaker is marked by its many firsts. It was the first to truly bear his name, and it was the first to be conspicuous about trying to accommodate the footwear needs of a tall, 260-pound player like LeBron. It was also the first LeBron sneaker by designer Ken Link, who would design the next James’ signature models that followed up until the LeBron 6. Notice also that it was the first LeBron signature sneaker to use a strap—one of the functional elements that would eventually figure in the creation of the LeBron Soldier later on.
Zoom LeBron 3 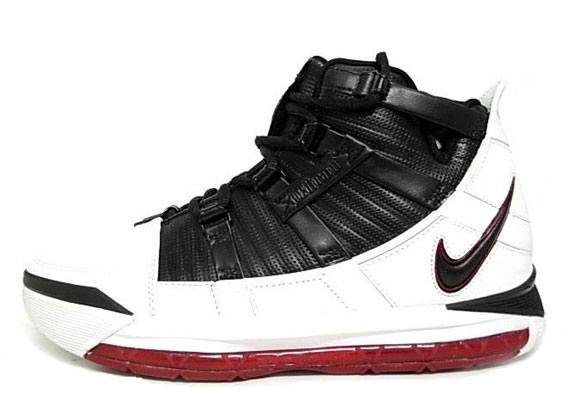 With the 3, James’ signature sneaker line was taking shape—literally. Chunky, round, and high-cut, the LeBron 3 had the silhouette that many of his future sneakers would eventually adopt. It was also the first of his shoes to use the “King James” lion motif, with an emblem on the tongue. But in almost every other way, the 3 was just a marginally improved version of the LeBron 2.
Zoom LeBron 4 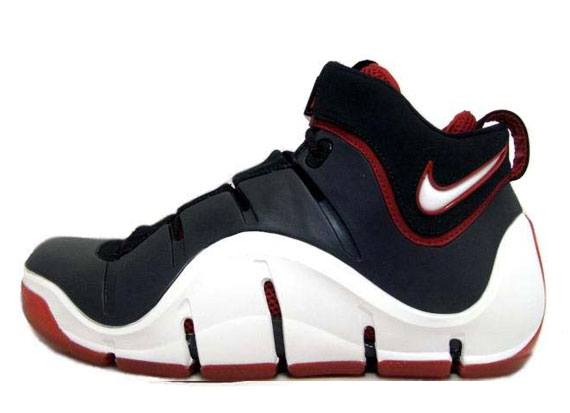 Wavy lines, a groovy sole, and a futuristic Foamposite upper made the fourth LeBron sneaker one of the most unique and most memorable of his signatures. This was also the shoe that LeBron wore when he led Cleveland to the franchise’s first finals appearance, where they would ultimately lose to the Spurs.
Zoom LeBron 5 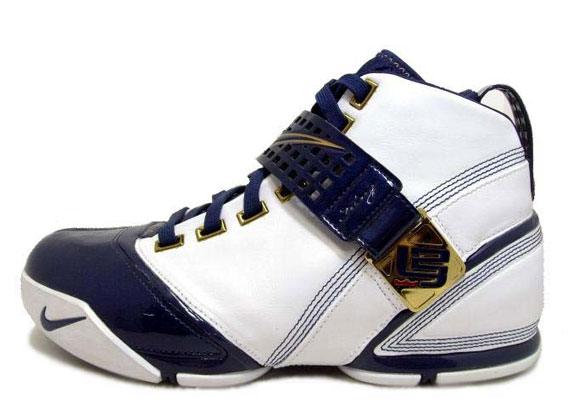 As James continued on his meteoric rise to basketball superstardom, his shoes started to reflect more and more of his personality. The fifth LeBron sneaker bore a lot of design elements that referenced the athlete: gold detailing for a royal look befitting “the King,” a lion emblem on the tongue, an ankle strap that was inspired by a milk crate that James practiced with as a child, and a map of his hometown, Akron, Ohio, on the outsole.
Zoom LeBron 6 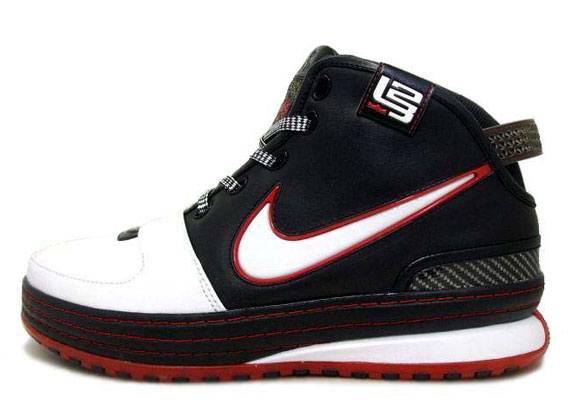 His sixth signature shoe (and his last with designer Ken Link) would return to the clean look of his first, but including all the new design elements that came to define the NBA star's signature line. The LeBron 6 was inspired by the Nike Air Force 1, but would include all the motifs (the lion, the L23 emblem, the strap) and a distinct triple-stacked sole. The shoe also marked James’ first MVP tenure, which lasted for two seasons, starting with 2008-2009. (Naturally, the MVP colorway of this shoe remains highly coveted.)
Air Max LeBron 7 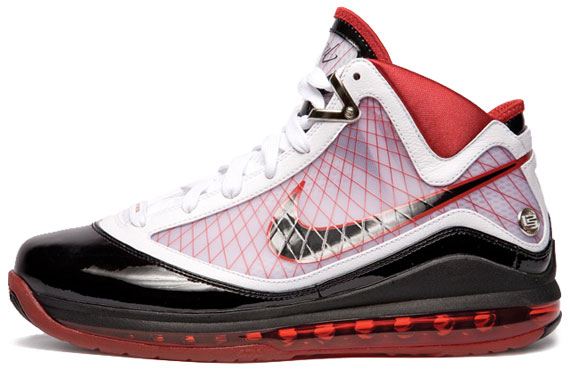 A new designer stepped in for James’ seventh sneaker: Jason Petrie, who would go on to design every LeBron signature hereafter. Until the 7, James’ signature sneakers all used Zoom cushioning. Petrie would change that and incorporate a full-length 360-degree Air Max unit for the outsole. The 7 was also the first LeBron sneaker to use Nike’s lightweight Flywire technology, with exactly 23 wires across the upper. In many ways, not least of which is its amazing design and colorways, the LeBron 7 remains one of his greatest sneakers to date—as acknowledged by James himself in an interview with Hypebeast.
Air Max LeBron 8 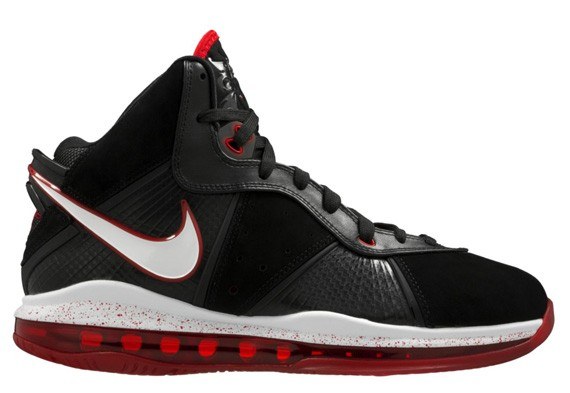 One could argue that the general look and identity of LeBron sneakers as we know them today began after the 7, with the LeBron 8 and its tall, loud, almost intimidating design. The 8 also marked one of the biggest moments of James’ career, when he decided to take his talents over to the South Beach, known as “The Decision.” This made James a controversial figure in 2010, and also gave us one of the most popular recurring colorways of LeBron sneakers: “South Beach,” which pairs teal with pink. The “Pre-Heat” LeBron 8 is still one of the most coveted LeBron sneakers to date. 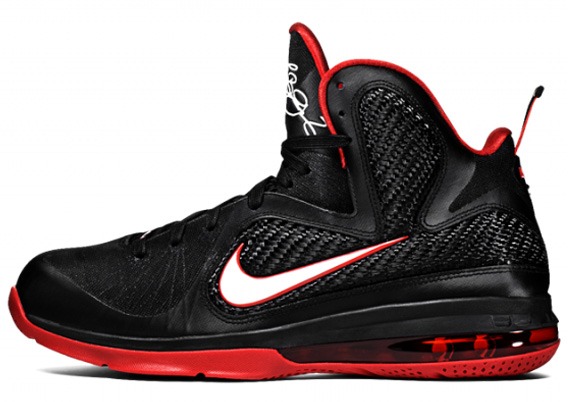 Petrie developed the same silhouette with the Lebron 9, adding curves and a distinct carbon fiber mesh on the upper, plus a visible air unit at the heel. The 9 didn’t debut on NBA hardwood until later in the year because of the 2011 lockout, but would eventually become the shoe of James’ first-ever championship, when the Heat took down the Oklahoma City Thunder and bagged his third MVP award. The ensuing “Championship” and “MVP” colorways were, of course, incredible. 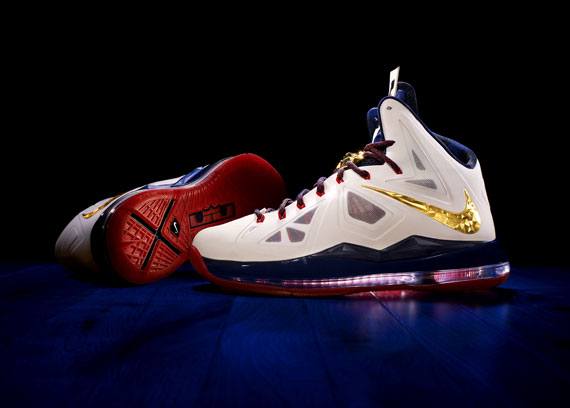 Embossed diamonds and sharp lines made James’ tenth signature sneaker one of the most futuristic and aggressive-looking ones yet. It would also see James through his second championship and his fourth MVP plum in the 2012-2013 season. And because sneaker culture had already encroached into the mainstream around this time, the LeBron 10 also marked the rise of luxury colorways in his signature line, such as the ever-popular “Cork” LeBron 10 EXTs, and other iterations in suede. 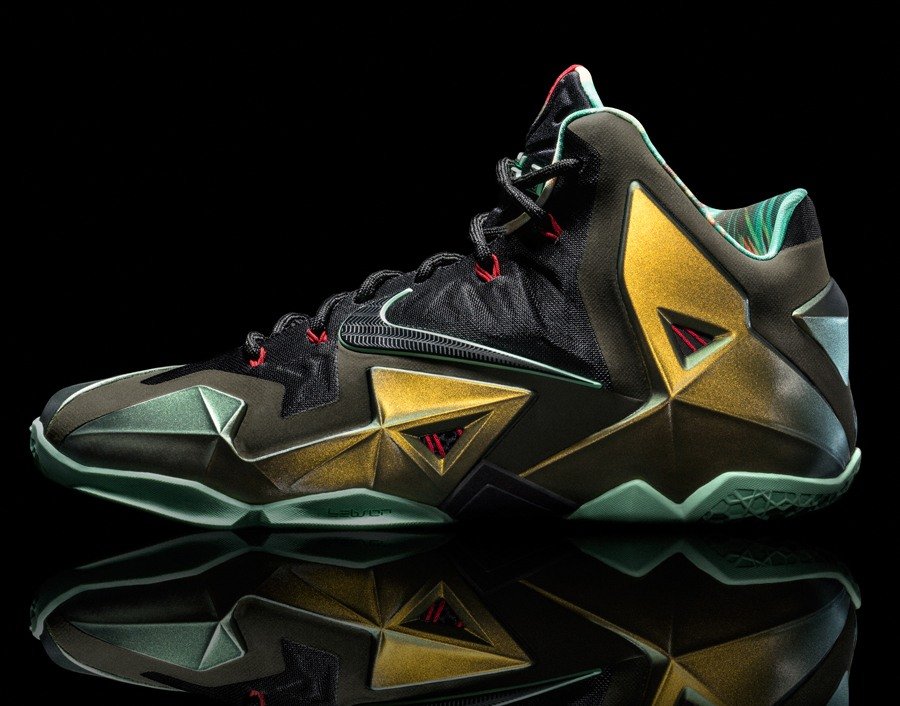 With the Lebron 11, Petrie turned the “futuristic” knob up to…well, eleven. These were almost ridiculously robotic when they first came out—like something Iron Man or Master Chief could wear. The lines were at their sharpest, and the Hyperposite panels on the upper were cut like a jewel. The 11 was also the first Lebron shoe to publicly release in a “What The” colorway, which took famous colorways from James’ entire signature line and mashed them up into one. It was an homage to LeBron’s Nikes, and a sign of how far the line had come.
LeBron 12 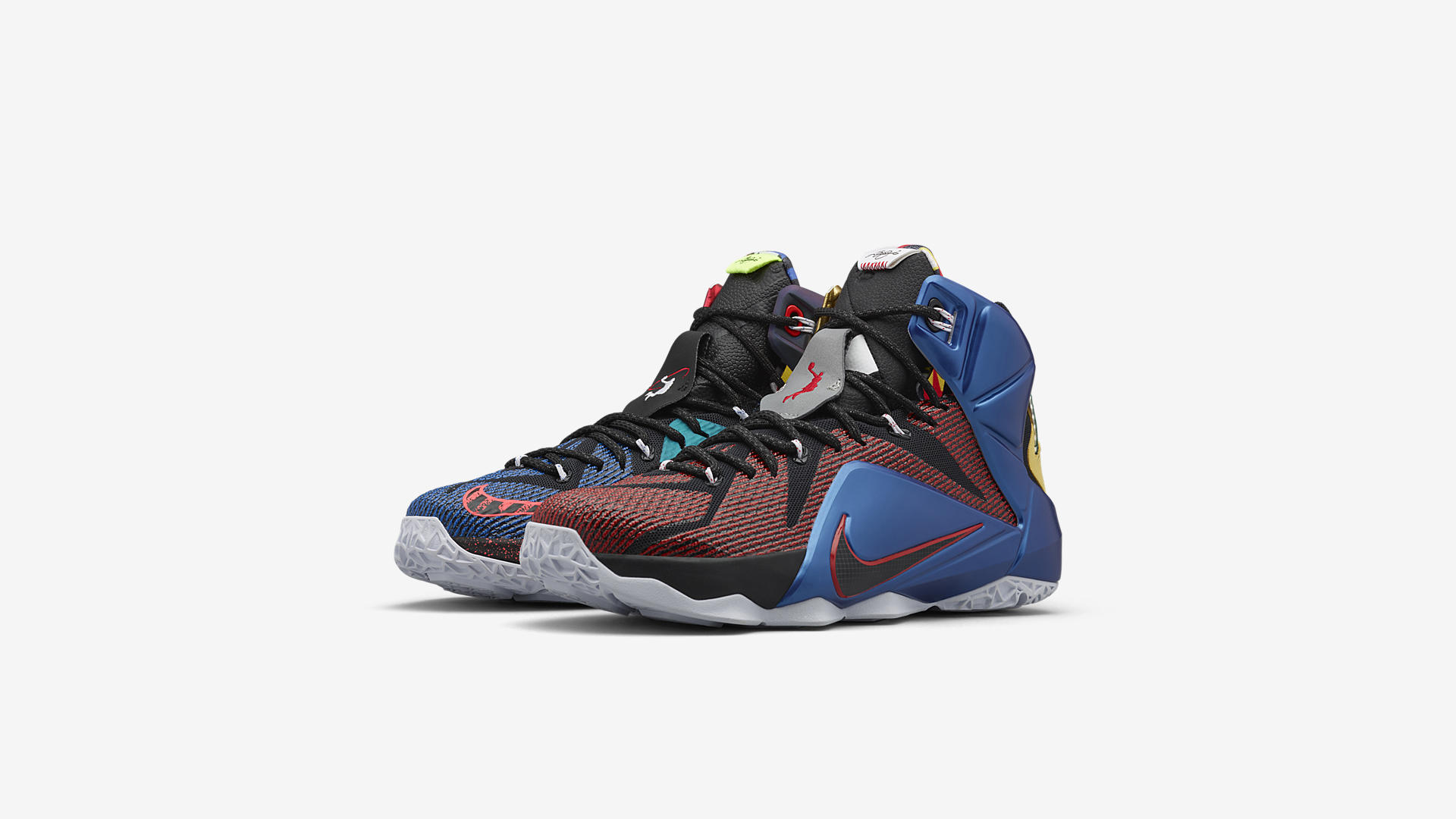 In the 2014-2015 season, James was back with the Cavaliers. The prodigal son returned wearing his 12th signature sneaker, another futuristic design by Petrie (although not quite as cyborg-like as the 11). The distinct design feature of the 12 was the use of hexagonal zoom units under the outsole—a feature that would carry over to the 13 and 14. It’s also worth noting that the LeBron 12 got a Philippines colorway for our leg of James’ “Rise” tour.
LeBron 13 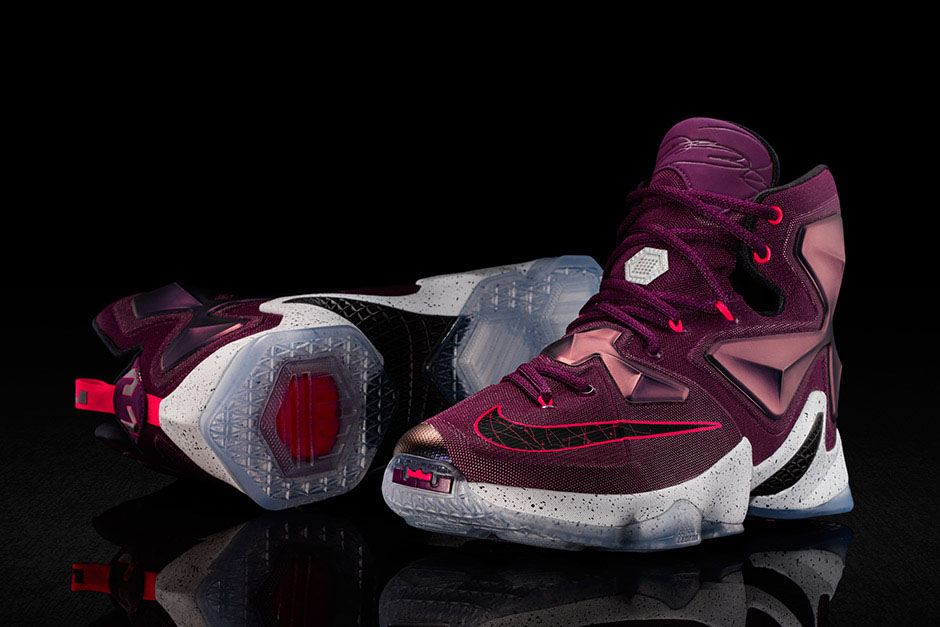 As Petrie continued to refine the same futuristic LeBron look, the shoes started to look sleeker. The 13 retained the jeweled Hyperposite for the upper and the hexagonal sole units, but in a slimmer, taller silhouette. Notably, this sneaker was also released for the 2015-2016 season, which saw James bag his third championship. However, throughout the Finals series, James mostly wore the Lebron Soldier 10 instead.
LeBron 14 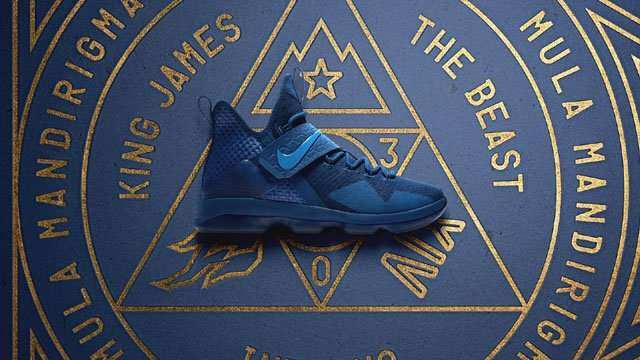 With the LeBron 14, there was a visible effort to engineer for speed by stripping away the excesses of his previous models. This made a more minimal LeBron sneaker—not as many lines and features, but still distinctly LeBron. Note the sock-like collar—a first for LeBron sneakers—that was popular among running shoes at the time. Petrie also appears to have taken from the archives of James’ sneaker history by applying a strap to the 14. It’s also the second LeBron model to have a Philippines-themed colorway: this time, the all-blue “Agimat.”
LeBron 15 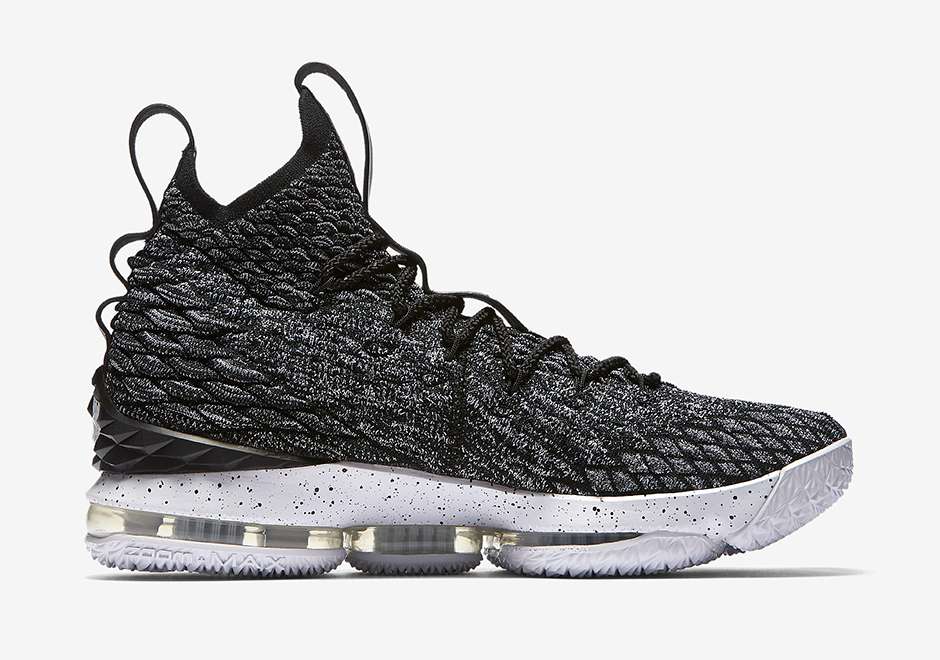 The Lebron 15's most prominent aspect is the Flyknit upper, which is actually a special kind of Flyknit called “BattleKnit,” designed specifically for this shoe. James initially begged off of Flyknit for his signature shoe, worried that it wouldn’t be able to stand the weight of his movements on court. So Nike got to work on BattleKnit, and the result is this thick, scaly quilt of an upper that brings the King’s signature line to the future.