IT'S all over and the dust has cleared. The Golden State Warriors are the NBA champs (again), and Kevin Durant is the Finals MVP (again). Number 35 is sitting at the top of a new dynasty, with back-to-back rings and back-to-back Finals MVP titles over the two seasons since he signed with the Dubs. He even recently announced that he could retire in five years. Twitter fails and jersey burger notwithstanding, KD got what he came for, 11 years after his league debut.

For these 11 years, Durant has also had 11 sneakers with Nike, which signed him right out of the gate, as a rookie. And like the man himself, Nike’s KD line has come a long way since. Take a look back at every numbered shoe (excluding KD Trey 5s) from year one. 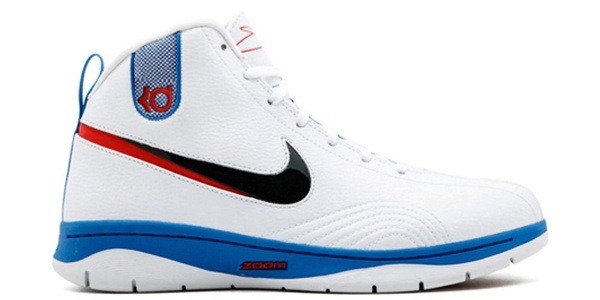 From the beginning, Durant worked with Nike designer Leo Chang for his signature sneakers. The first in the KD series was bulky like many basketball shoes at the time, but a little awkward in its curves. It was also built with an affordable price point in mind, so both aesthetically and in terms of performance, the first KD was totally overshadowed by the LeBron James signatures (the revolutionary Air Max Lebron 7) and Kobe Bryant signatures (the super sleek Zoom Kobe 5) at the time. Still, Durant picked up Rookie of The Year in 2008, right before this sneaker dropped early in 2009. A bright future awaited, and as early as now, there was a logo for it. 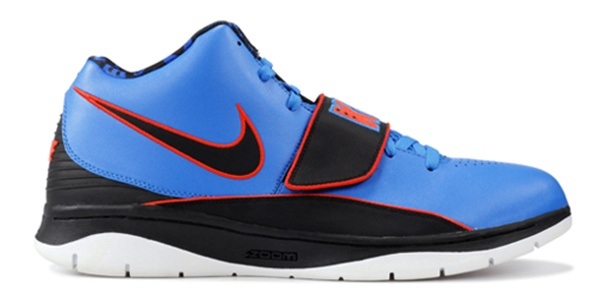 The second signature was a marginal improvement: it looked a little better and came out with better colorways (including the first-ever ‘Creamsicle’ KDs—a staple colorway that recurred throughout Durant’s years with the Oklahoma City Thunder). But it was still an underwhelming shoe that seemed to be having an identity crisis with that forefoot strap. Almost, but not quite there yet. 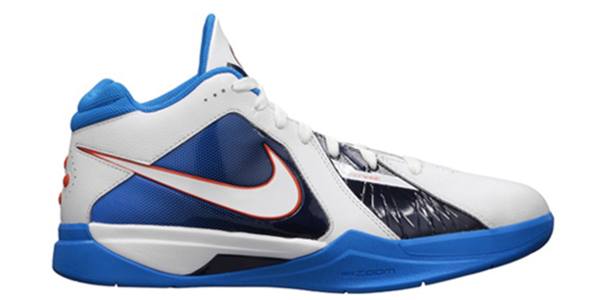 Now, we’re talking. With the third model, Nike’s KD line established an identity. Sleek, like the Zoom Kobes, but with more focus on support and some dynamic design elements. Chang’s goal for the 3 was to achieve “lightweight stability,” which he pursued bv using the then-popular Flywire technology. The KD 3 also started churning out more iconic colorways, including the super-collectible EA Sports collaboration and the bright yellow Christmas colorway. 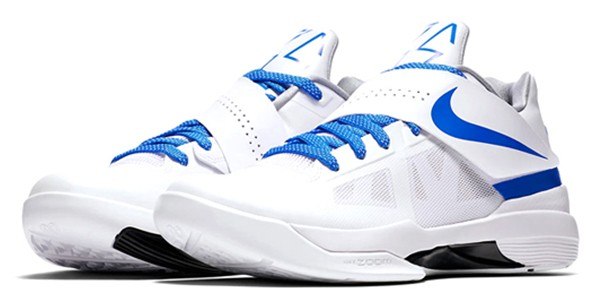 If the KD line hit its stride with the 3, it went out in full force with the 4. To this day, the 4 is perhaps the most iconic sneaker to bear Durant’s signature, with sharp, aggressive design elements on a dynamic low-top sneaker. The long strap, of course, is the main feature, but the 4 truly rose to fame for all the cool and meaningful colorways like ‘Nerf’, ‘Weatherman’, and ‘Aunt Pearl’. It was also the shoe that Durant wore for his first trip to the NBA Finals in 2012, where he faced off with LeBron James’ Miami Heat. The Thunder would eventually lose to the Heat in five games (and James would nab his first-ever NBA championship). But in that showdown, KD became a bona fide star. 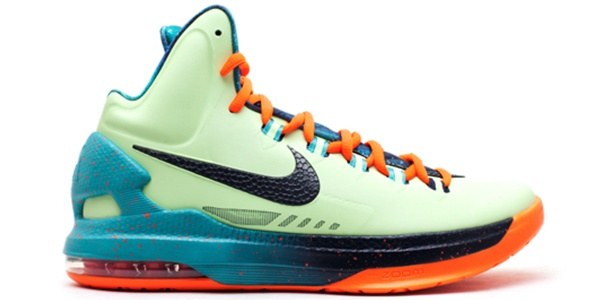 With the 5, Chang tried a high-top silhouette that was just as sharp and aggressive-looking as the 4. He also introduced Air Max to the KD line with a barely-there heel bubble. But the shoe saw a spike in the KD line’s popularity, likely because KD himself was becoming more and more popular, but also because the colorways just kept on coming. For the third year in a row, Durant’s signature line churned out bold, collectible colorways. He had made his mark on sneaker culture with the 5. Also, this was the first KD sneaker to have an Elite version. 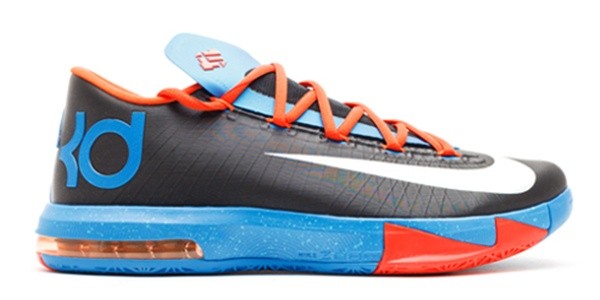 While it had a strange, elongated shape about it, the 6 continued to ride the popularity of the KD line. It was another design departure—the first of what would be a series of three low-cut KD models—and a transition into a new era of KD design. But the crazy signature colorways were still there, so it still felt like a cohesive line. Durant also took home his first league MVP in 2014, wearing the KD 6. Off the court, this sneaker marked the beginning of KD’s lifestyle models as well, with the much more awkward, much less successful KD 6 NSW. 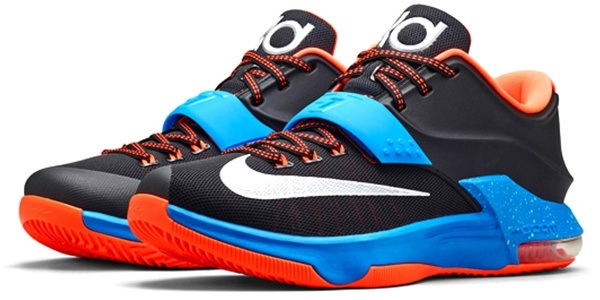 The 7 stuck to the 6’s low-cut, bullet-like silhouette but added the aggressive design elements that everyone loved about previous models. This is the last time we saw a forefoot strap on a KD model—so far, all the succeeding models have done away with them. Around this time, Durant was suffering multiple injuries as he came and left the court, so the 7 didn’t get to see quite as much action. 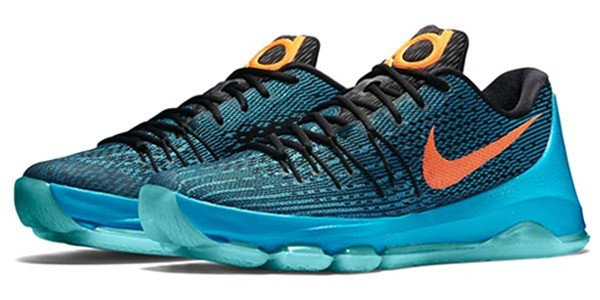 In retrospect, the KD 8 seems like an experimental misfit in the series. The Nike KD 1 and 2 were the awkward early models; 3, 4, and 5 were the sleek and sharp models; 6 and 7 were the rounded low-cut models; then came the 8—a weird “in-between” model that preceded the current batch of knitted boot-like KDs. It has that strange sole, and its only defining characteristic is its “FlyWeave” upper. It looks nothing like what came before and after it. Perhaps it’s appropriate, as this was the shoe he wore in the 2015-2016 season—his last with OKC. Alongside Westbrook, Durant put up great numbers throughout, but ultimately lost to the Golden State Warriors just shy of the Finals. 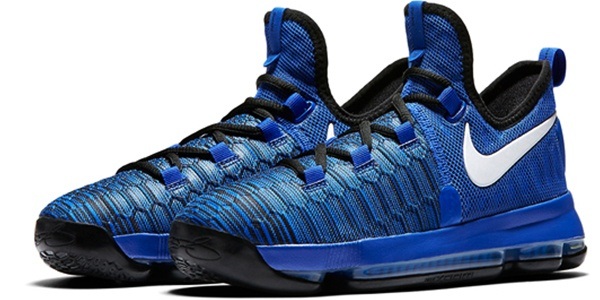 Which brings us to the current era of Kevin Durant and his sneakers. Around the same time that the KD 9 was released, Durant made his own “The Decision,” which was to take his talents to the Golden State. Fittingly, the 9 was a new beginning: the first KD to use full-fledged Flyknit, and the first to have the mid-cut boot-like design to it. He’d wear the 9 throughout most of the 2016-2017 season, before swapping it out for the KD 10 in the 2017 Finals (which, as we know by now, marked his first championship). 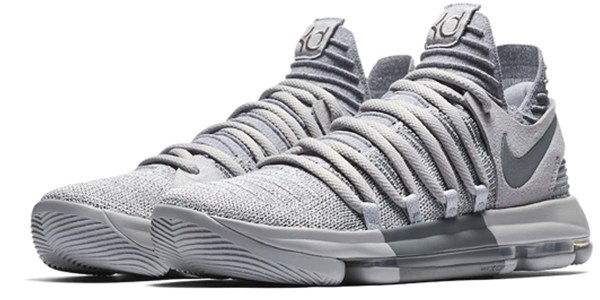 Of all the KD models, the 10 was the one that departed least from its predecessor. Chang had always switched things up, model-to-model, but the 10 was incredibly similar to the 9 in all aspects. The lacing was a little more aggressive, which was said to help with lockdown and fit. But that’s about it. Aesthetically, it’s almost as if the 10 were really meant to be a KD 9.5. But of course, because Durant won his first championship in a pair of 10s, these will still be a historic pair. 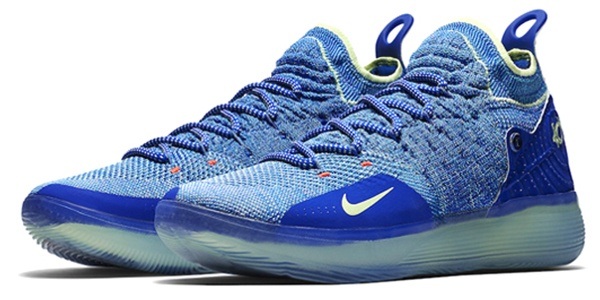 And now, the current KD sneaker: the 11. Retaining the mid-cut, Flyknit upper, the 11 takes a rounded sole and overall shape instead. The result is a sneaker that looks much better than its immediate predecessors, and almost like a lifestyle shoe—like a Nike Flyknit Roshe Run on steroids. It’s a welcome departure from the 9 and 10, and a great shoe to mark Durant’s second championship.

This story originally appeared on FHM.com.ph.
*Minor edits have been made by the Spin.ph editors.