FINE ART auction house Sotheby’s is riding on The Last Dance hype, putting a pair of game-worn Air Jordan 1s from 1985 up for auction.

Bidding will run all the way to May 17 — coincidentally, the day the Jordan docu’s last two episodes will air. Sotheby’s estimates the shoe will fetch up to $150,000, or around P7.6 million.

Will the final sale price zoom way past this estimate? Last year, the New York auction house — known more for auctioning Norman Rockwells than Nikes — sold a 1972 Nike Waffle Racing Flat, or the so-called ‘Moon Shoe’, for a whopping $437,500 (around P22.1 million). Sotheby’s had earlier estimated the shoe would go for $160,000. 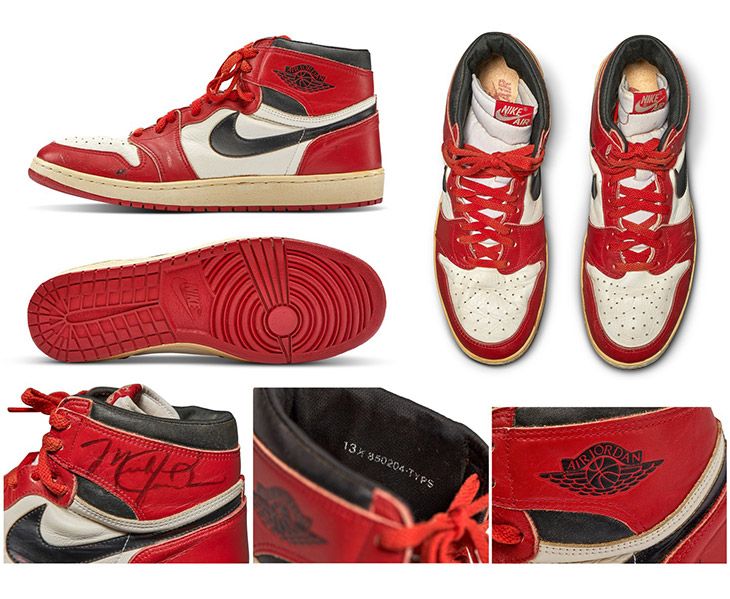 Custom-made by Nike for Jordan’s ‘85 season, the Air Jordan 1s (the left in size 13, the right in size 13.5) features a few standout details that you won’t find in the public release of the shoe.

For one, it’s a mid, with red laces. (In 1985, AJ1s sold to the public only came in high or low versions, with black laces.) The trademark Nike swoosh on this pair, says the auction house, is “longer, leaner, and more aggressive.”

At this early point stage in his career, Jordan didn’t yet have the luxury (or clout) of coming to every game in brand-new kicks, so this pair is a little more game-worn than most other game-worn shoes. As Sotheby’s describes it: “Beautifully creased, black and red and white slashes and markings on the uppers are presumably from the shoes knocking into each other or into the shoes of opponents while Jordan wore them to battle.”

His Airness’s still-legible signature is scrawled on the right shoe.

The auction house acquired the pair from Jordan Geller, a sneakerhead who runs the Shoezeum in Las Vegas.

“Owning this pair has been a real pleasure,” said Geller in a statement, “and with all the excitement surrounding Michael Jordan and 'The Last Dance', my wife and I decided that it's time to let the shoes find a new home.”

Speaking for Sotheby’s, Brahm Wachter, its director for e-commerce development, said: “Michael Jordan is perhaps one of the greatest athletes to ever walk the face of the earth, and it is an honor for Sotheby’s to offer this historic pair of sneakers.”