UPDATED: Which NCR malls are closed and which cities have curfew? See list

[UPDATE, 15 March, 7:47 p.m.] In the first day of community quarantine in NCR, multiple Manila cities have decided to invoke the 8 p.m to 5 a.m curfew, including Manila, Makati, Pasig, Muntinlupa, and Pasay.

Pasay has also ordered the closing of all malls inside its city.

Quezon City, Taguig, and Las Pinas will be holding a special session on Monday, according to Inquirer's Krixia Subingsubing.

In Manila City, mayor Isko Moreno's ordinance stated that violators may be fined P5,000 or imprisoned up to a month.

Even before the announcement of the LGUs, many major malls have also decided to fully suspend all operations starting today or tomorrow.

Power Plant Mall in Makati was already closed today, except for its supermarket, Mercury Drug, and health services provider.

Other Robinsons malls, as well as SM malls, will still be have limited operating hours.

[UPDATE, 14 March, 11:12 p.m.] Malacanang has clarified the position of the Metro Manila Council, and stated that any curfew to be imposed over the entire NCR will need to be approved by President Duterte. Cities and municipalities, said spokesperson Salvador Panelo in a statement, can enact a curfew on their locales through a signed ordinance.

[Original Story] Today, the Metro Manila Council announced that the entire NCR will be placed under a curfew. All non-essential travel within the metro will be banned from 8 p.m. to 5 a.m. They also “requested all local legislative councils of the NCR to issue an ordinance for temporary closure of malls and related establishment[s].”

[UPDATE, 14 March, 9:58 p.m.] San Juan will close all its malls beginning tomorrow, March 15, according to a post by Mayor Francis Zamora. This includes the Greenhills complex (including Promenade and Theater Mall), as well as Santolan Town Plaza. The city has 9 confirmed COVID-19 cases.

Ayala Malls has already taken the step of announcing the early closure of its Manila malls starting today (Saturday) at 7 p.m.

SM will also do the same. "In support of the local government units and the MMDA, SM Supermalls in Metro Manila will be adjusting its mall hours starting March 15, 2020: Monday to Sunday, 11 a.m. to 7 p.m," the company said in a statement posted on its Facebook account.

It continued: "This is in response to the intensified alert to protect the public from the COVID-19 virus." 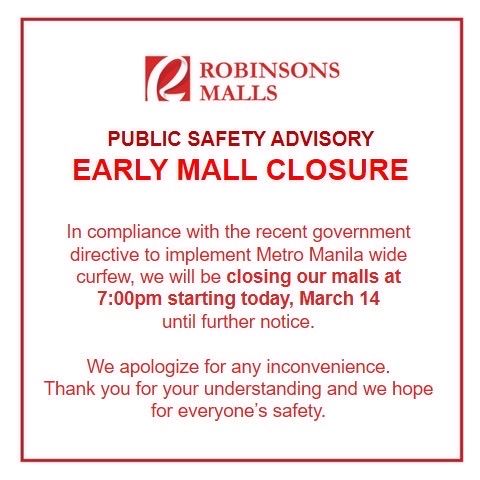 Meanwhile, Fisher Mall in Quezon City announced that they would shut down their cinemas beginning today.

Commercenter in Alabang, for its part, will be completely suspending operations until further notice.

Also in Alabang, Filinvest City announced that it will limit its mall hours from 11 a.m. to 7 p.m.

Powerplant Mall in Makati announced that it will close just as the curfew begins at 8 p.m. It assured patrons that its supermarket, The Marketplace, will remain open during regular hours.

Manila will go into lockdown at midnight, March 15, in an effort to halt the spread of COVID-19 cases.

Essential services like “groceries, supermarkets, pharmacies, restaurants with home deliveries and bank services” will remain open during this period.

As of writing, the Philippines has 111 confirmed cases and 8 confirmed deaths. Most cases are confined in Metro Manila hospitals, though reports have begun to trickle in of cases in Batangas and Oriental Mindoro. One death has already been tallied in San Fernando, Pampanga.