The collaboration was shared on Instagram and was described as an “amazing” tribute in an article that appeared on US-based fashion and culture website Complex (www.complex.com).

“They aren’t real and most likely will never see the light of day. Unless of course bootleggers take interest and decide to make fakes,” penned contributing writer Rajah Allarey of the fictional shoe, each part of which represents a specific model and a memorable colorway of the Nike Zoom Kobe 1 to 10.

It also turned out Monteroso, an artist since he was five years old, was not done yet as he came out with two more sketches to honor the 'Black Mamba' which tell the history of Bryant as a sneaker endorser.

One black and white sketch is a fusion of all of Bryant’s signature kicks, the iterations KB8 when he was with adidas during the early part of his career from 1997- 2002.

“A couple of days ago, I sketched a concept shoe combining all of Kobe's Nike signature models. But we shouldn't forget the beast in the afro, his glory days sporting the three stripes. I combined all of Kobe's adidas models in 1 shoe, from the adidas Top Ten 2000 to the infamous Kobe Two. I dub it the ‘Afro Deity,’" Monteroso wrote.

The third concept sketch, titled ‘Midlife Crisis’ is another ‘what if’ shoe that is composed of different Air Jordan models that Bryant wore when he was a sneaker ‘free agent’ in 2002-03. The Lakers star also wore examples from And One, Reebok and Converse during this period but the Jordans are the best remembered.

“After his adidas deal and later signing with Nike, let's not forget the awesome year in between, the '02-'03 season. Kobe was a sneaker free agent and wore any shoe brand he likes, and the coolest were the Jordan PE models. I combined the 7 Jordan models he wore that season in 1 shoe, I dub it the ‘Midlife Crisis,’” Monteroso, an avid sneakerhead, wrote.

Bryant would eventually sign with Nike in 2003, a partnership that continues to this day. 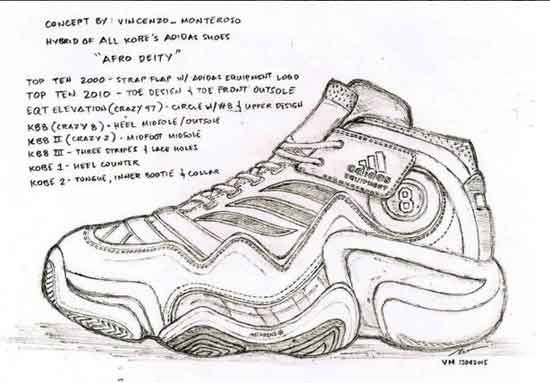 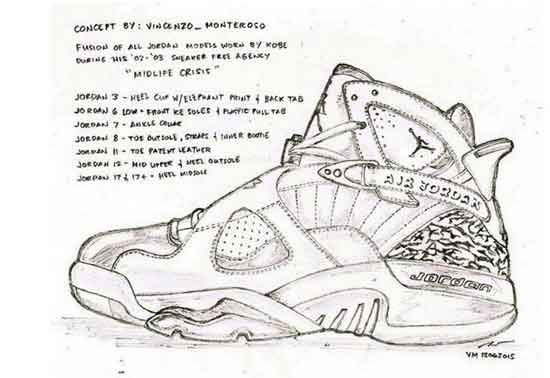