“THIS is the longest four minutes of my life!”

This was the foremost thought in my oxygen-starved brain as I struggled to complete the short but challenging workout prepared for bloggers and media members at the media launch of of the Medicard-Metafit Fitness Boot Camp Season 4.

As a short preview of what to expect, fitness coach and Meta Fit developer Jim Saret brought along testimonies that his system works. Raffy Tan and Hazel Chua, former contestants of ABS-CBN’s The Biggest Losers, supervised the session while providing much-needed encouragement.

Saret, with his wife Toni, were with Medicard Philippines and Eton Centris officials at the Centris Walk, Eton Centris in Quezon City.

Invited participants were made to perform as many sets as possible within a four-minute period - each set comprised of 10 repetitions of jumping jacks, squats, push-ups and lunges. After the short but intense activity, Coach Jim said he can actually form a good idea of a person’s level of physical fitness based on the number of rounds a person can accomplish. A sedentary person can finish two while three is considered OK. Fit individuals can finish four rounds in four minutes. Coach Jim said national athletes he helps train can accomplish five to six rounds everyday.

According to Saret, he used the same type of exercises for the contestants in the Biggest Loser reality show. With some people actually losing 100 lbs. in four months. He said he developed the routine based on simple warm-up movements within a short amount of time with equipment that uses whatever equipment is available.

He added that metabolic fitness is not merely about losing weight but is intended to make people stronger, fitter and healthier.

“When you run for an hour you can lose around 200 calories. Our four-minute workout can make you lose 200 to 500 calories, depending on one's effort. When you get off a bike you stop losing calories. After you finish our workout you continue to burn calories and even after you shower and already resting you are still sweating,” explained Saret, whose Meta Fit holds roadshows in malls and companies.

The Boot Camp, which started in February 2012 at the Medicard Lifestyle Center in Makati, gives participants a chance to challenge and motivate themselves for comprehensive training and high-intensity workouts with proper guidance from and supervision of expert fitness instructors including Saret, ABS-CBN’s Biggest Loser coach together with other coaches.

Only 200 participants will be accommodated in order for the coaches to properly supervise the camp to be held at the Centris Walk, Eton Centris starting from September 30 to November 6.

Medicard Philippines, Inc., one of the country’s leading HMO providers, said this is part of their mission of encouraging the public to live healthier lifestyles.

"It is our privilege and pleasure to the partnership with Medicard in this Fitness Boot Camp. It is a great opportunity for fitness enthusiasts to have this type of activity. Rest assured that Eton Centris will always be in support of all Medicard's future endeavors." Ma. Victoria Santiago, AVP for Centris Operations, said.

“With the success of our first three seasons, we feel that it has become our duty to continue the goal of promoting a healthy lifestyle,” he said.

“The boot camp is a perfect venue for health and wellness advocates as we help provide them a more comprehensive health and fitness package,” Saret said.

Season 4’s 12-session program runs on Tuesdays and Thursdays and is open even to non-Medicard members. Online registration for interested participants is open until September 30, 2014 through its official Facebook page. 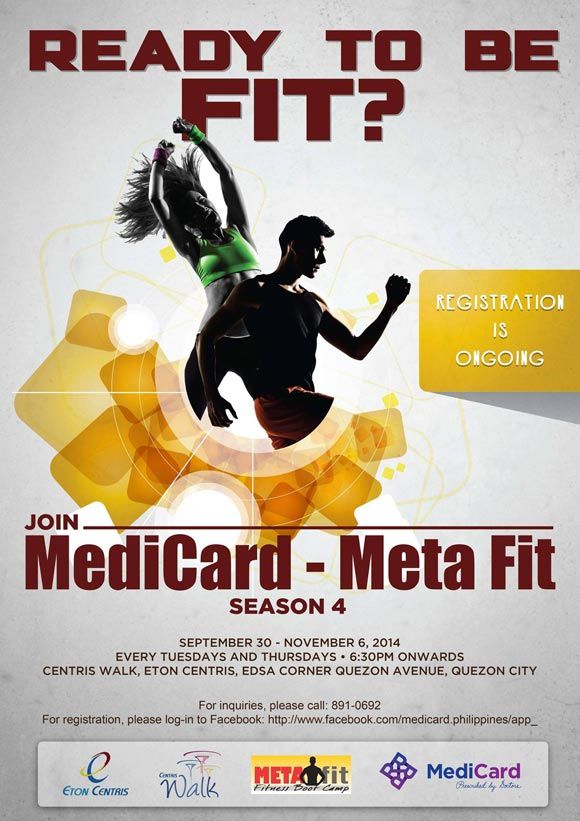