Irving is the latest NBA star to be accorded his own shoe as he joined the likes of Kobe Bryant, Kevin Durant and teammate LeBron James.

The reveal was made online via a live telecast dubbed ‘A Look Into the Future’ from New York City. Irving was introduced by basketball analyst and retired NBA player Kenny Smith along with fellow Nike signature athletes Penny Hardaway and Charles Barkley.

“As a kid, imagining that I’d be in the Nike family with my own shoe was something that seemed almost unattainable,” said Irving. “Now that I’ve received the Kyrie 1 I’m honored to represent Nike and its next generation of players.”

Designer Leo Chang said the goal of his team was to build a shoe to match Irving’s speed and quickness. The Kyrie 1 needed to be light and responsive with the best traction Nike Basketball could develop for Irving’s prolific first step.

Among the performance features of the Kyrie 1 are Nike Zoom Air cushioning in the forefoot, a 360-degree dynamic traction pattern wrapping the shoe’s sidewalls for grip and Hyperfuse construction for support, stability and breathability.

Being a signature shoe, the Kyrie 1 also contains distinct personal ‘storytelling’ details: the new Kyrie Irving logo on the shoe’s tongue, the #2 on the upper heel along with Irving’s personal signature on the inside of the tongue and the jagged pattern on the wrapped traction near the toe and heel counter are both inspired by the Sydney Opera House in Australia where Irving was born.

The acronym “JBY” that sits beneath Irving’s new logo on the outsole stands for “Just Be You,” a motto that Irving hopes to serve as an inspiration to children.

“This is a representation of my generation. I want kids to say that this is their shoe,” Irving said.

The Kyrie 1 will make its debut when the Cavs play the Knicks at Madison Square Garden on December 5 (Manila time).

The shoe is now available on NikeID.com and will go on sale locally on January 10 at selected Nike retail establishments, athletic shops and department stores. It will have a retail price of P5,795. 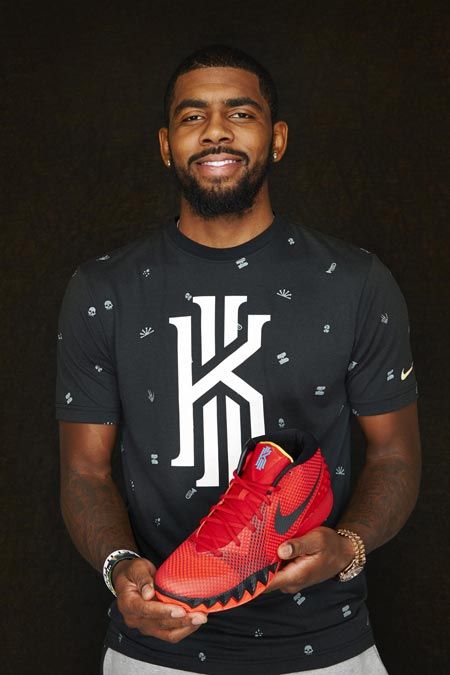