HERE'S a quick history of Converse and its iconic shoe that’s loved by fans over the globe.

The must-have sneakers on every sneakerhead’s list are plenty, but there are very few that are as timeless as the Converse Chuck Taylor All-Star shoe. Its classic, straightforward aesthetic has remained largely unchanged since it debuted a little over 100 years ago. That’s right — the very same canvas sneaker worn by grungy youths and street style star is a century old.

The heyday of the Converse Chuck Taylor All-Stars, or Chucks as the kids call them, has ebbed and flowed over the decades, but their popularity is undeniable. Over 800 million pairs—and counting—have been sold worldwide. The sneaker's classic silhouette is simple yet so unique, you can spot it two streets away.

The model was named after basketball star Chuck H. Taylor.

Charles H. Taylor, or Chuck Taylor, was a semi-professional basketball player, who later became a salesman for Converse. Taylor started his semi-pro career in March 1919, playing for the Columbus Commercials when he was 17 years old. He went on to play for the Dayton, Ohio Non-Skids, as well as teams in Detroit, Michigan and Chicago, Illinois.

In 1921, his brief career ended when he joined the Converse Rubber Shoe Company as a traveling salesman and product marketer, after being hired by Bob Pletz, an avid sports fan. Within a year of joining the company, his ideas to improve the Converse All-Star shoe design (enhancing flexibility and ankle support) were adopted. In 1932, Taylor’s signature was added to the now-iconic ankle patch. The shoe was later known as the Converse Chuck Taylor All-Stars—despite not receiving any patents or royalties for his contributions.

During the 1926 to 1927 season, Taylor interrupted his retirement from semi-professional basketball to become a player-manager of the All-Stars, the Chicago-based, company-sponsored touring team that promoted the Converse All-Star shoes.

Taylor was inducted into the Naismith Memorial Basketball Hall of Fame in 1969, a year after his retirement from Converse.

The Chuck Taylor started out as a basketball shoe.

Before becoming the street-casual footwear it's known as today, the Chuck Taylor All-Star sneaker made bank as the first legitimate basketball shoe. The first iteration of the Converse All-Stars was introduced in 1917, four years before Chuck Taylor joined the company.

In order to promote product sales, Taylor traveled across the United States, conducting basketball clinics at high school and college gyms and YMCAs. Taylor also met with local coaches and made special appearances at sporting goods stores. He traveled so extensively that he lived in motels for an entire year, with his car trunk full of shoe samples.

The hard work paid off immensely: The Converse All-Stars became the official basketball shoe of the Olympic games for over 30 years, between 1936 to 1968. It also became the official athletic training shoe of the United States Armed Forces during World War II. By the 1950s, there wasn’t a single basketball player, whether in high school, collegiate, or professional teams, who did not wear a pair of All-Stars. By then, the All-Stars became a standard in the sport. It also became the shoe of choice for other sports such as professional powerlifting.

The Chuck Taylor was the top basketball sneaker until the '60s.

In the 1960s, the Chuck Taylor All-Star sneaker drove Converse to the top of its game. It captured 70 to 80 percent of the basketball shoe market and was worn by 90 percent of collegiate and professional basketball players.

In the 1970s, however, shortly after Chuck Taylor’s death, the All-Stars began to experience a decline. Converse struggled financially with poor business decisions. The company lost its dominance to competitors who offered better arch support. Elite athletes dropped All-Stars and switched to brands that offered innovations such as leather uppers, harder rubber soles, pumps, and air cells. Tree Rollins was said to be the last player to wear canvas All-Star sneakers in an NBA game in 1979.

In the '70s and '80s, the Chuck Taylor was a youth and counterculture symbol.

Despite losing its grip in the basketball market, the All-Star sneaker never really fell out of touch as it gained popularity in youth countercultures, evolving from its image as an elite basketball shoe to the street style choice of rebellious kids, artists, and musicians. Coincidentally, it was in the '70s that Converse began introducing more colors to the All-Stars, allowing for more fashionable options in the casual shoe market. It was also during this period that the shoes would be known as “Chucks” among the youth, a moniker that has existed until today.

Pop culture also didn’t miss out on the rebirth of Chuck Taylors as a street style favorite. Sylvester Stallone’s Rocky Balboa wore Chucks in the 1976 movie Rocky. Punk bands such as the Ramones and The Sex Pistols made Chucks their shoe of choice. In the 1980s, Chucks were officially retro-cool when they were worn by Michael J. Fox in Back to the Future.

Chuck Taylors became a status symbol of sorts as championed by young, rebellious stars such as Kurt Cobain and River Phoenix. Even Andy Warhol, whose foundation Converse later conducted a series of collaborations with the brand, reportedly silk-screened his own pair. 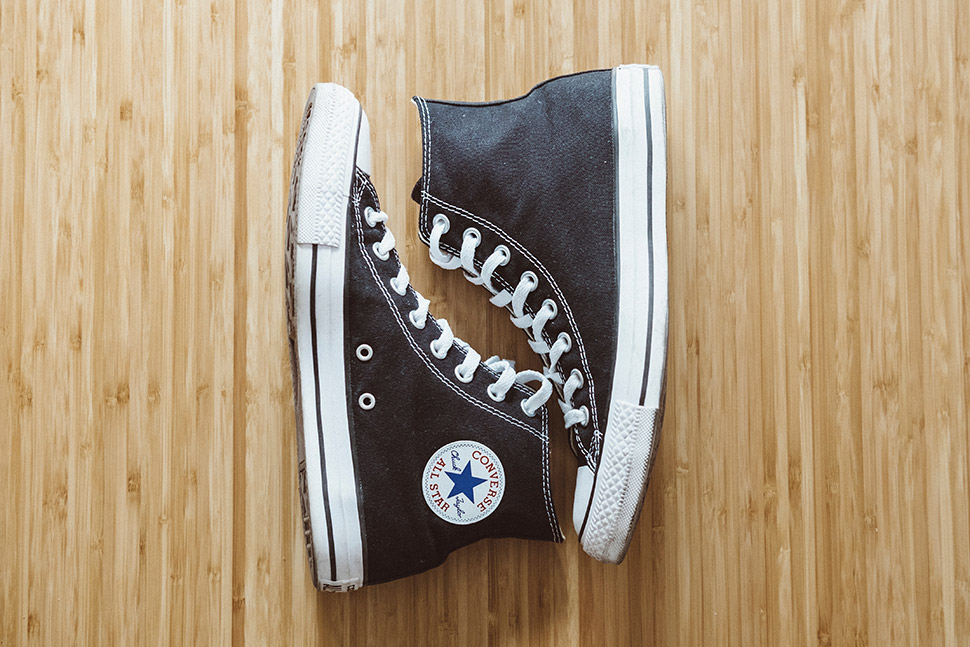 Despite the Chucks’ steady popularity, Converse’s business continued to falter in the early 2000s, leading to the company’s multiple claims of bankruptcy. In 2003, the history of Converse changed forever: In the brand's 95th year, Nike Incorporated bought Converse for $305 million and continued to produce its line of products under the brand.

All Converse products used to be manufactured in the U.S., but Nike transferred its operations overseas, where the majority of other Nike products are produced. The move decreased Converse’s production costs and raised its profits. Nike’s acquisition breathed new life into the business, with Converse sales reaching almost $2 billion in 2016. The Chuck Taylor Low-Top shoe was the second-best selling sneaker in the United States in 2017.

In 2015, Converse unveiled the Chuck Taylor All-Star II, a modern, updated version of the All-Star shoe and its first redesign since the 1930s. Maintaining the classic silhouette and aesthetic it’s been known for since its introduction, the Chuck II featured tech innovations that improved its fit, movement, and durability. This included a tensile canvas that was lighter yet stronger than the original; a higher yet lighter-weight rubber midsole and foxing; a full-length Lunarlon sockliner, borrowed from parent company Nike; perforated suede on its collar to maintain its shape and improve breathability; memory foam padding on the tongue to improve its fit; and an updated, fully embroidered patch.

Despite its highs and lows in Converse's history, Chuck Taylors have always prevailed, cementing their timeless status in style and popular culture.

*Minor edits have been made by the Spin.ph editors