To create a standard set of categories to measure health-consciousness, it aggregated search scores from a list of 38 health-related topics based on the main components of living a healthy lifestyle: eating, working out, resting, and other activities.

How Health Consciousness Was Measured

The researchers at RunRepeat wanted to get a diverse set of topics to get more well-rounded and accurate results in their conclusion. For each category (eating, working out, resting, and others), a set of keywords was assigned so that when people google these keywords, a score is awarded to the category in terms of health-consciousness.

Below are the categories for health consciousness, and some of the keywords related to each. 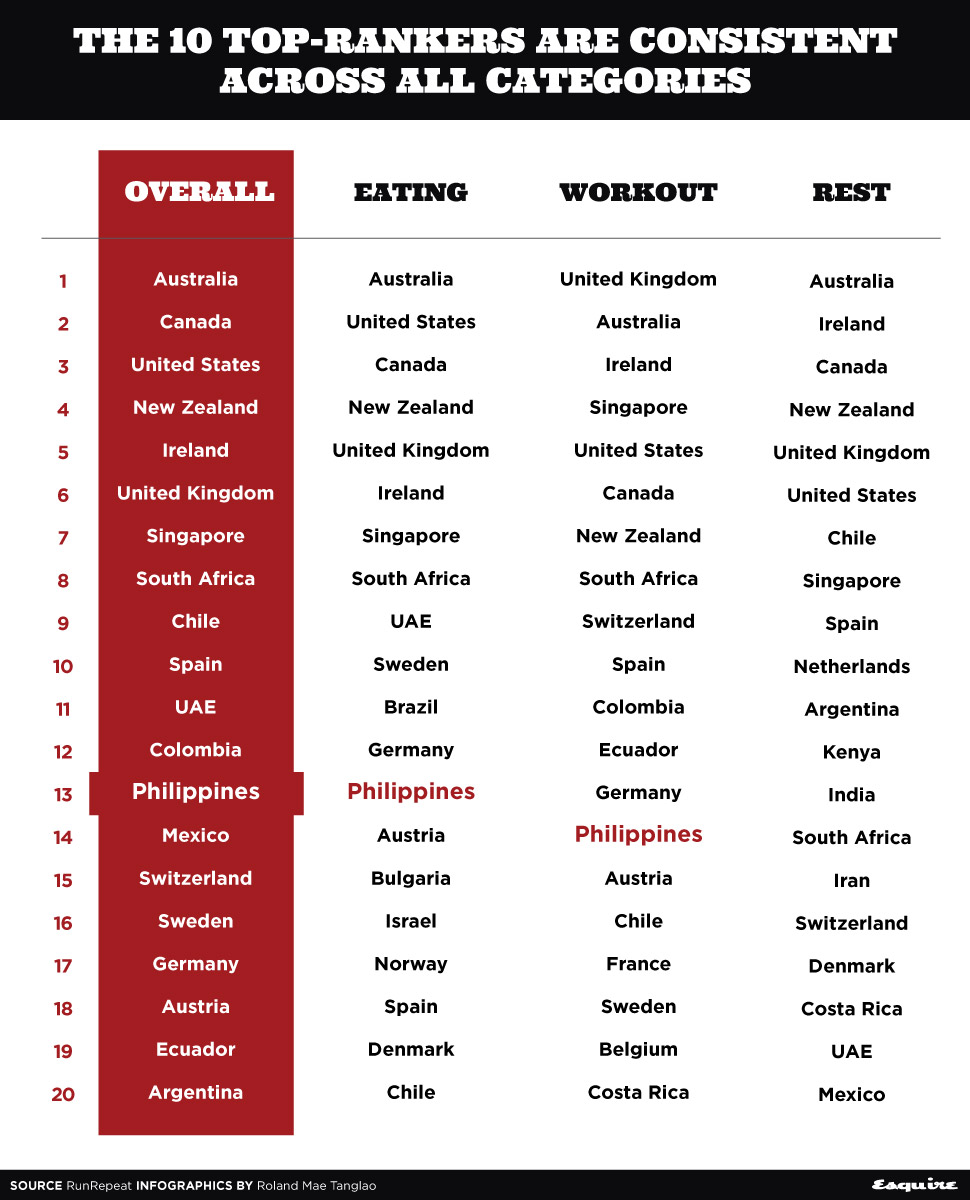 How the Philippines ranked

Out of 89 countries sampled in the study, the Philippines ranked 13th most health-conscious country in the world. The Philippines and Singapore are the only Asia-Pacific countries to make it to the list's top 20.

Singapore landed as the fourth most health-conscious country in the world and first in Asia, while Malaysia ranked 23rd, Indonesia 46th, Vietnam 63rd, and Thailand 66th. According to the study, Filipinos' top searches were about eating and working out.

The top 20 countries with the most health related searches are the following:

Most Health-Conscious Countries Are Also the Most Healthy

Most Health-Conscious Countries Are Also the Happiest

The World Happiness Report is based on individuals' ratings of their own happiness on a scale of zero to 10. Factors that are used to measure happiness are personal relationships, main activity or occupation, achievements, health status, future perspectives, standard of living, neighborhood, leisure time, and security, among others. A study by Cambridge University actually concluded that money can buy you happiness.

Limitations of the Study on Health Consciousness

Since the study largely relied on data from Google Trends, its accuracy is affected because of exclusivity. For example, Google is not the dominant search engine used in countries like Japan, South Korea, China, and Russia. Internet penetration is also an issue. For example, sample respondents in the Philippines would only be composed of people who have access to the Internet, or 60 percent of the population.

Nevertheless, RunRepeat's study shines a light on important parallels about people's health consciousness, fitness, and happiness, which could be useful for future research on the science of happiness and longevity.