Filipinos are among the world's slowest runners - study

DATA shows a global decrease in running performance with the average time for finishing races slowing down by almost 40 minutes since 1986.

Men across all age groups are running slower than ever before, and it's a 40-year trend that began in 1986. The finding is based on the first-ever mapping of global running participation conducted by RunRepeat. The analysis covers an impressive 107.9 million race results around the world, including races in the Philippines. The results cover 70,000 race events from the period of 1986 to 2018, making it the largest and most comprehensive study of race results in history. 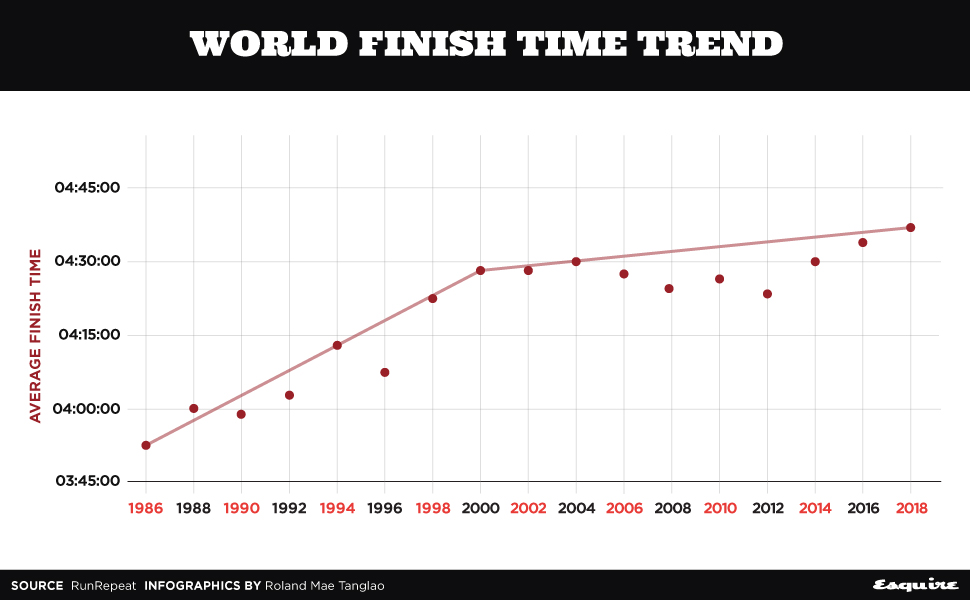 Why Men Are Running Slower: Fun

Is there a global decrease in running performance? Among the key takeaways in the study is that everyone has been running slower, but male runners, in particular, have a more pronounced statistic in the slowdown.

The graph below shows that women are improving their finish times since 2001 as seen in the slightly downward trend, while men are just running slower, indicated by the upward trend. 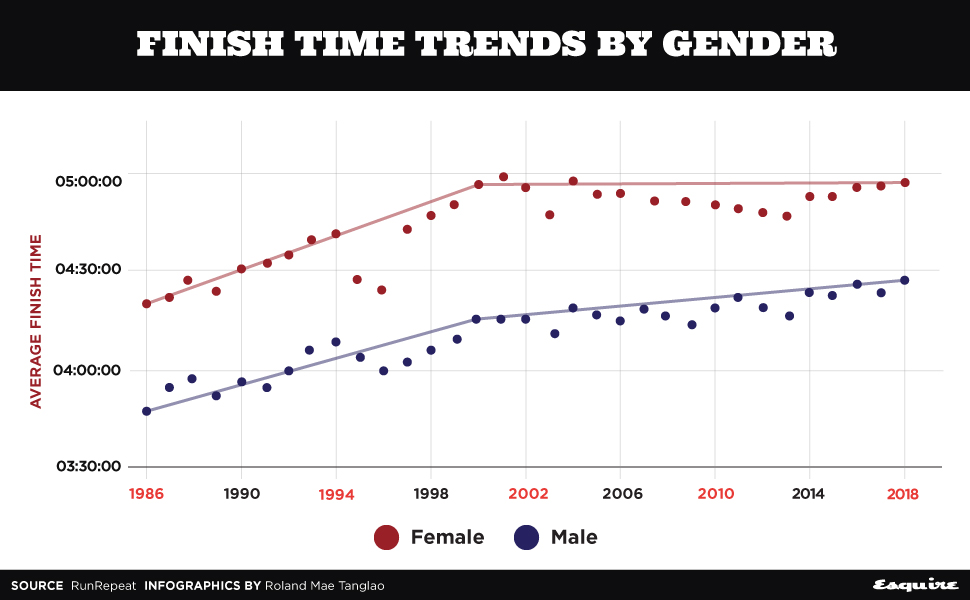 Analysts have pored over data to find out why there seems to be a decrease in running performance. A lot of people would assume the most obvious suspect is obesity-the slowest runners are the heavy ones-but this is unfounded. There is not enough data about runners' weights, but if you look at the general profile of most race participants, most are fit.

Mid-race selfies could also be contributing to the slowdown of runners. More people are taking time to slow down and snap poses for IG, never mind the finishing time. But selfies cannot account for the big slowdown that occurred from 1986 to 2010 when smartphones were not mainstream as it is today.

People no longer run to achieve goals, they run for recreation.

But the most probable reason why people have been running slower is the rise in popularity of races. According to RunRepeat, most people no longer run to achieve goals, they run for recreation, and this seriously affects performance. When people are not driven by goals but are motivated by the desire to have fun, you get slower runs and longer finish times.

Also, people are participating in races these days for the experience, not for the competition. Meanwhile, it is also possible that those who are achievement-oriented have transitioned to ultra-running.

Filipinos Are Among the World's Slowest Finishers

Filipino men are listed among the slowest race finishers across all race categories (5k, 10k, half marathon, and marathon). 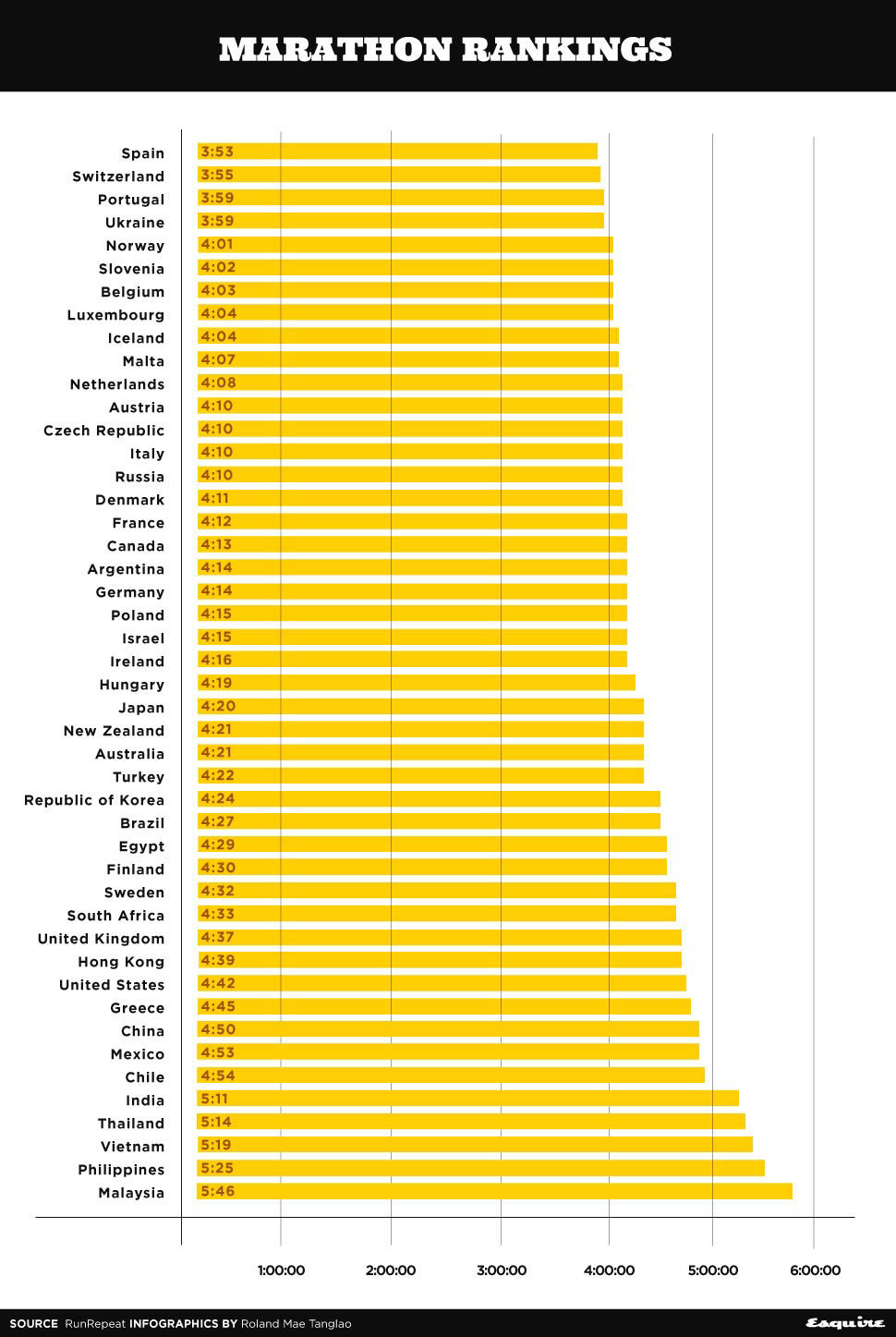 If people are really running slower than ever, then why do we have athletes like Usain Bolt breaking world records? It's not that people are becoming slow runners, it's more that running as a sport has attracted more ordinary folk like you and me to participate, hence affecting the global average of finish times.

One of the limitations of the study is the fact that its data comes from organized races, which, over the years, have attracted a different profile of runners. In the past, serious athletes and marathoners joined these races to compete, but since the races have become a social event, more and more average runners are able to join.

According to the Journal of Sport and Health Science, there are four main reasons why people join marathons:

1| Psychological Motives - people join races to maintain or enhance self-esteem, to appreciate the meaning of life, or to cope with negative emotions.

2| Social Motives - People join races to gain affiliates, recognition, and approval from others.

3|Physical Motives - People join races for fitness and health reasons, such as wanting to lose weight.

In the past, people may have joined races because of physical motives and achievement motives.That could have changed through the decades, when more people are joining for psychological and social motives, such as gaining approval and recognition. As a result, running faster could no longer be a very important goal.

People are not really running slower. Races just attract different kinds of runners who have different motivations for participating in races, which affect the average finish time.