Dr. Joma Adornado, son of PBA legend Bogs, is out to teach fitness, one joke at a time

THE DREAM, ultimately, was to become a pro basketball player. Just like his father Bogs — the PBA legend, the three-time MVP, the Hall of Famer, the scoring champ who anchored the epic 1974 Fiba World Championship game against the Central African Republic. 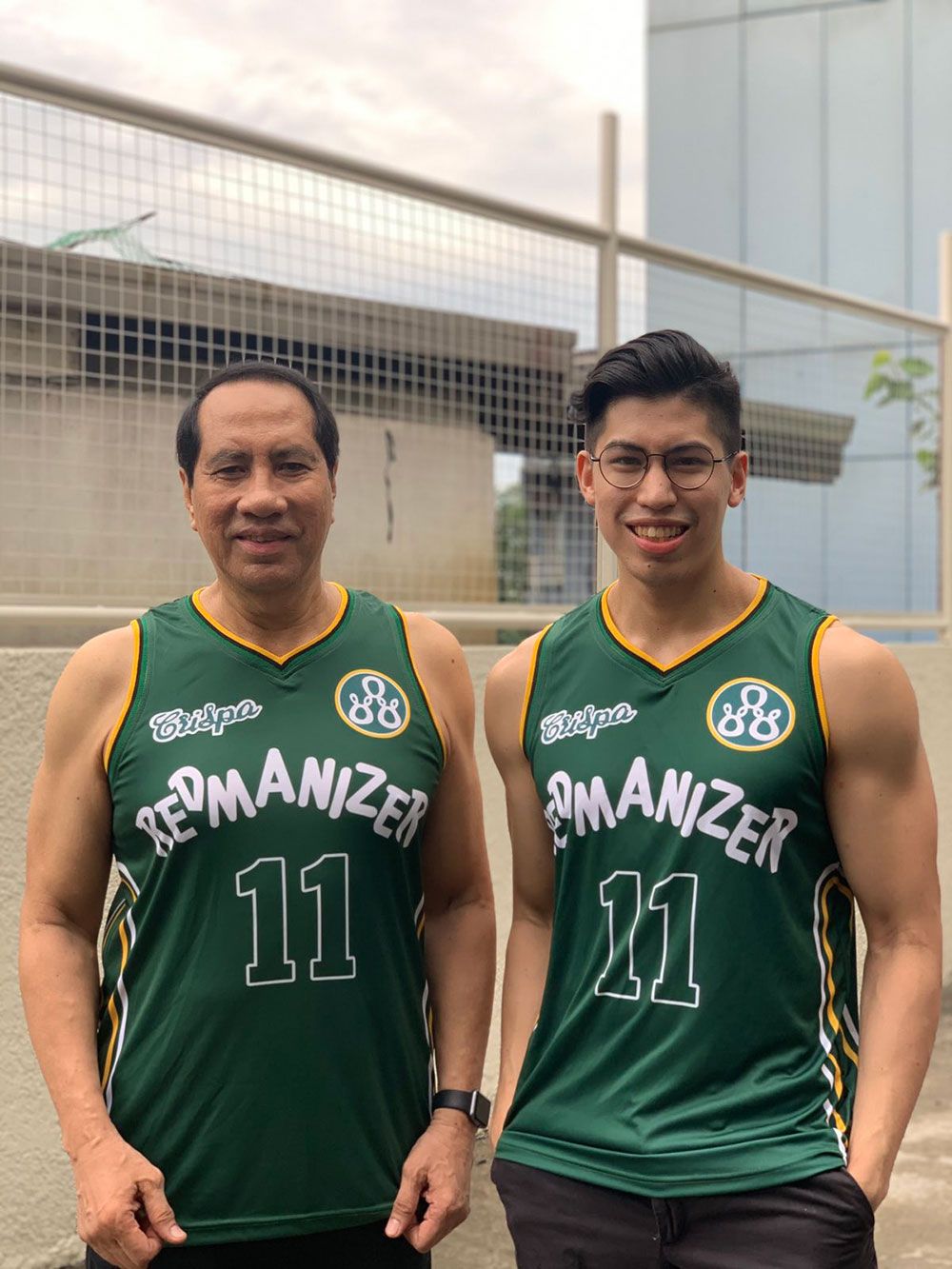 So when a skinny young Joma entered as a freshman in Ateneo, he was eager to hit the weights and lay down the fitness foundation he needed to take him all the way to the top.

He did this for two straight years.

Adornado wasn’t just doggedly loyal to his 135-pound load. He also stuck to a strict chicken breast-and-salad diet, supplemented on the side with whey protein.

It took two years before he got the message. With no noticeable improvement in strength or muscle mass, Adornado knew he needed to change.

Since then, he told SPIN Life, he’s probably changed his workout routine around 20 times.

“It's hard to say, mali pala ako. It's hard. It's our ego,” he said. “But it’s okay to tell yourself mali yung ginagawa ko.”

From racking the boards to passing the Boards

Joma is Doc Joma now. He passed the boards just last November — the culmination of a long and difficult decision to hang up his basketball jersey and pursue the career path of being a doctor.

“Growing up, there were certain expectations,” Adornado said. Relatives and family friends would come up to him when he was a kid, asking, “O ano, kasing shooter ka na ba ng dad mo?”

At an early age, he had to separate himself from the millstone of those expectations. But still, the dream to be a pro burned steadily all throughout college. But he never quite made it. He became captain of Ateneo’s Fr. Martin Cup-winning Team B (called “Team Glory Be” to Team A’s “Haily Mary Team”), but frustratingly, he never made the cut into the main UAAP squad. 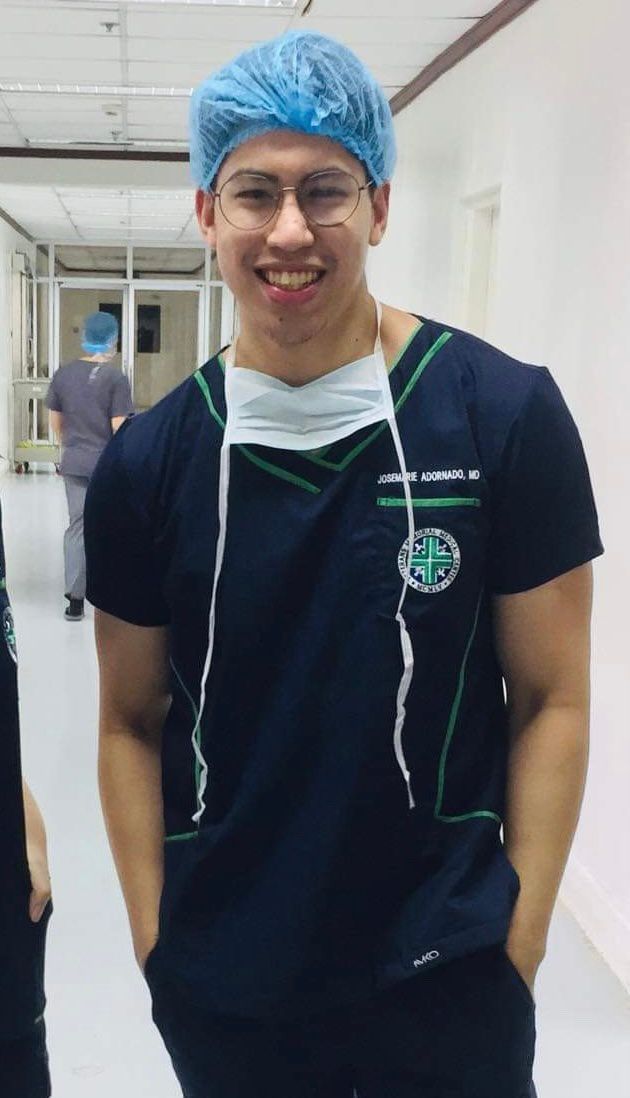 He was eventually drafted into the PBA D-League, but dropped out soon after to become a doctor.

Now, as a newly-licensed doctor, Doc Joma is at the frontlines of the current pandemic, serving as an emergency room doctor in a hospital in Quezon City. It’s a baptism of fire for the newly minted medical worker, as a new surge of COVID-19 cases batters the capital city’s healthcare system.

Gainz for the brainz

When he can get a break from his medical duties, Adornado is also pursuing a project he’s been thinking about since 2017: his very own fitness channel.

It’s called “Brain Gainz.” It’s just at two videos at the time SPIN Life wrote up this article, but Adornado seems to have already nailed a specific tone he wants for his videos — and perhaps, inadvertently discovered a second (or is it third?) career as a comedian.

“Bro!” he opens one video. “Kaka-member ko lang sa—” and then he snaps his head to look knowingly at the camera “—Anywhere Fitness.”

In another, slim headband around his head, he play-acts as a fitness influencer, complete with a YouTube video frame that says, “Buy My Shit To Get Abs In Two Minutes.”

From the name itself, Brain Gainz takes broad, satirical swipes at “bro” fitness culture. But more than making fun of stereotypes, he’s out to carefully examine the fitness misconceptions that have fossilized into “common knowledge.”

Adornado’s first full-length video gleefully rips into Dr. William Sheldon’s “somatotype” division of human physique, when, back in the 1940s, the good doctor categorized all human bodies into one of three unchangeable types: ectomorph, mesomorph, and endomorph. 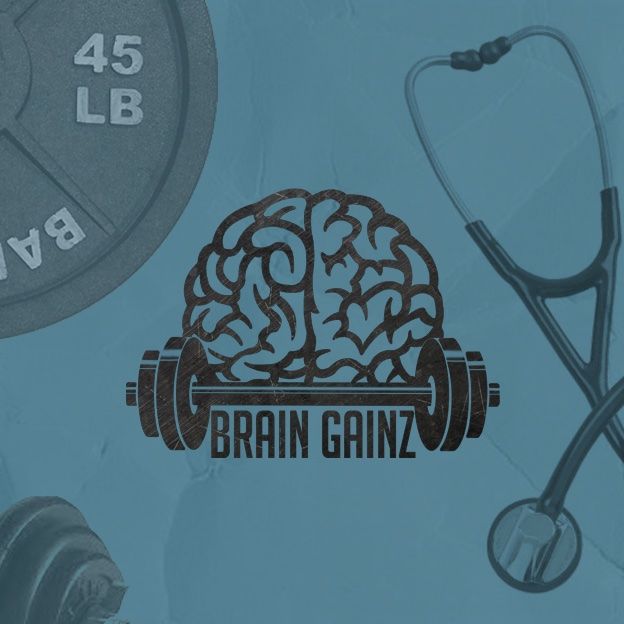 “Does it matter ba kung ikaw ang isang endomorph? Ectomorph? Mesomorph? Gemini? Pisces? Aquarium?” he asks the camera rhetorically, before a smash cut to a Doc Joma shaking his head at his own joke. “Pilit.”

Despite his criticism of the somatotype concept, and how it really doesn’t matter to your fitness goals, the video overall remains upbeat and positive. Helpful, even.

Throughout an hourlong conversation with SPIN Life, Adornado expresses his frustration with certain enduring fitness trends that have been proposed as a be-all, end-all to complete fitness.

Zumba, for one. Or detox diets. Or overpriced classes. Or trainers who promise specific, numbers-based weight loss results.

“If they can measure weight loss, [if they say] you will burn 10 pounds, automatically mali na yan,” he declared. “You cannot promise an X amount of weight loss per person.”

As a communications major (Adornado didn't take a pre-med course for his undergraduate), he finds it deplorable when cheap marketing tricks are deployed against people just starting out in their fitness journey.

These beginners, he said, are more easily suckered in because of what he called the "newbie gains."

"Kasi if you take someone who never worked out, and give them a workout and a diet, it will work. Maglo-lose sila," he explained. But after that initial flush, that first easy victory of five or ten pounds? Improvements come to a dead stop as the program fails to adapt. 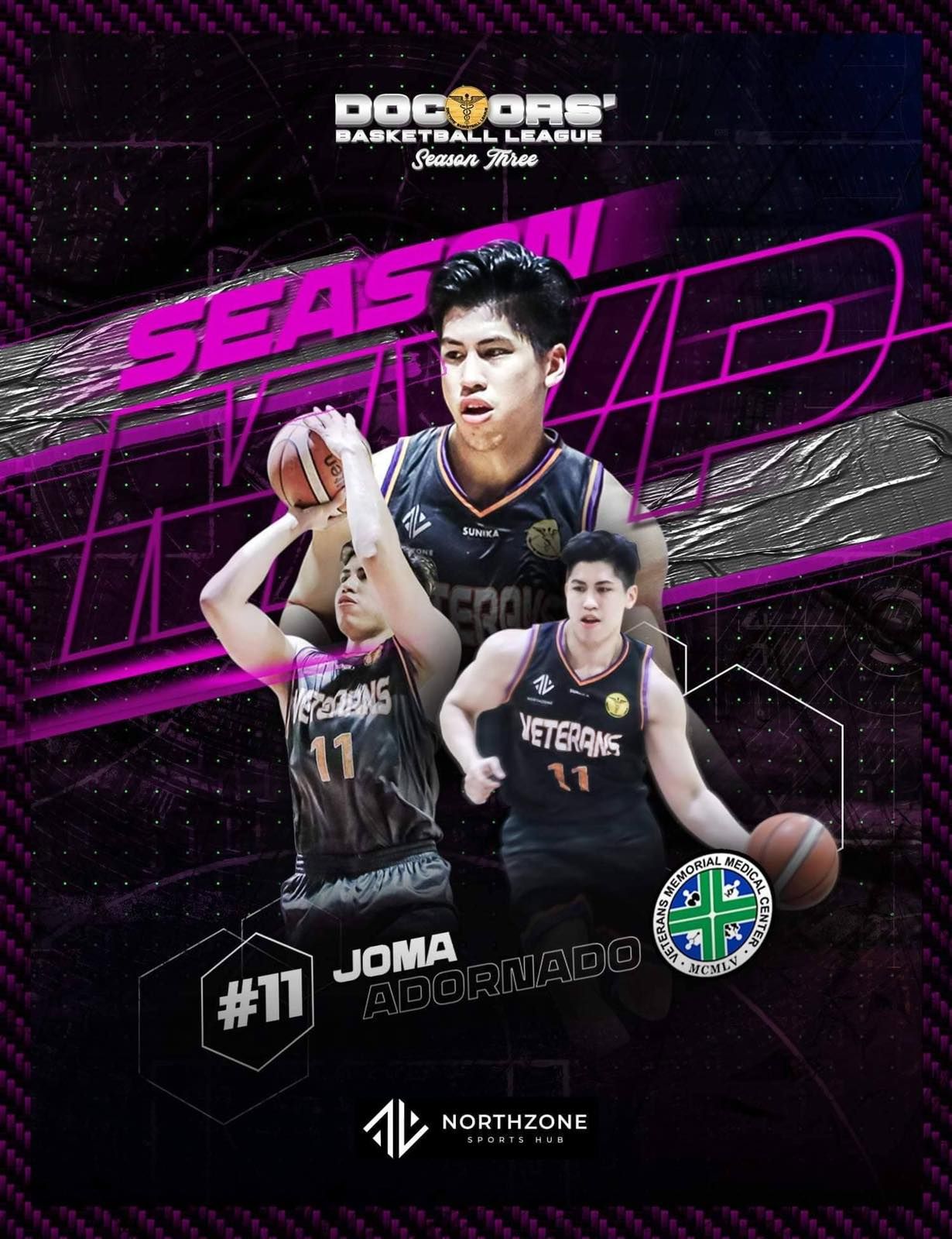 Adornado wants to use Brain Gainz as a common-sense, humorous way to cut through the marketing cruft, and bring a science-based approach to general fitness.

“Research comes out every year,” he said. “Unfortunately people do not read up on this research. It's very hard to understand. And this is where I want to come in.”

Just like his own videos, his idea for fitness is to be approachable.

“[Take] someone is obese and suddenly wants to diet and exercise. Ay naku! I'm proud of them! Yung intent pa lang nila!” Adornado raved. “The problem is, wala silang direction.”

And if they wade straight into a swamp of online fitness content and immediately go for exercises that sound tough, or diets that will starve them out, “Ano'ng mangyayari?” he asked. “People will fail the diet, people will fail the exercise, and it will only increase their level of depression.”

If there’s one fitness philosophy he sticks by, it’s this: “Getting the body that you want is very simple. You pick a workout that you like, and works best for you, and you do it over and over and over again.”

While he hopes his fitness channel would continue to improve the baseline fitness knowledge among the public, his ambitious, long-term career goal shoots from way beyond the arc. He wants to bridge that wide, yawning space between sports and medicine, stitching his two worlds together into a holistic practice for athletes.

“Kasi the two are intertwined dapat,” he said. “But a lot of doctors are actually intimidated by [the prescription] of health and exercise. The way doctors prescribe the exercise, the diet, babanggitin lang nila yan sa dulo [ng consultation].”

This hesitation even extends to physical therapists who are working with injured athletes. "Takot sila magbigay ng exercise sa mga patients nila. Di sila confident on how to progress the client."

Meanwhile, on the other side of the sports-medicine divide, when trainers are faced with a client who is suffering from conditions like hypertension and diabetes, the same intimidation comes into play. Adornado says trainers then avoid asking these clients to do weights, or tell them to just stick to the treadmill. 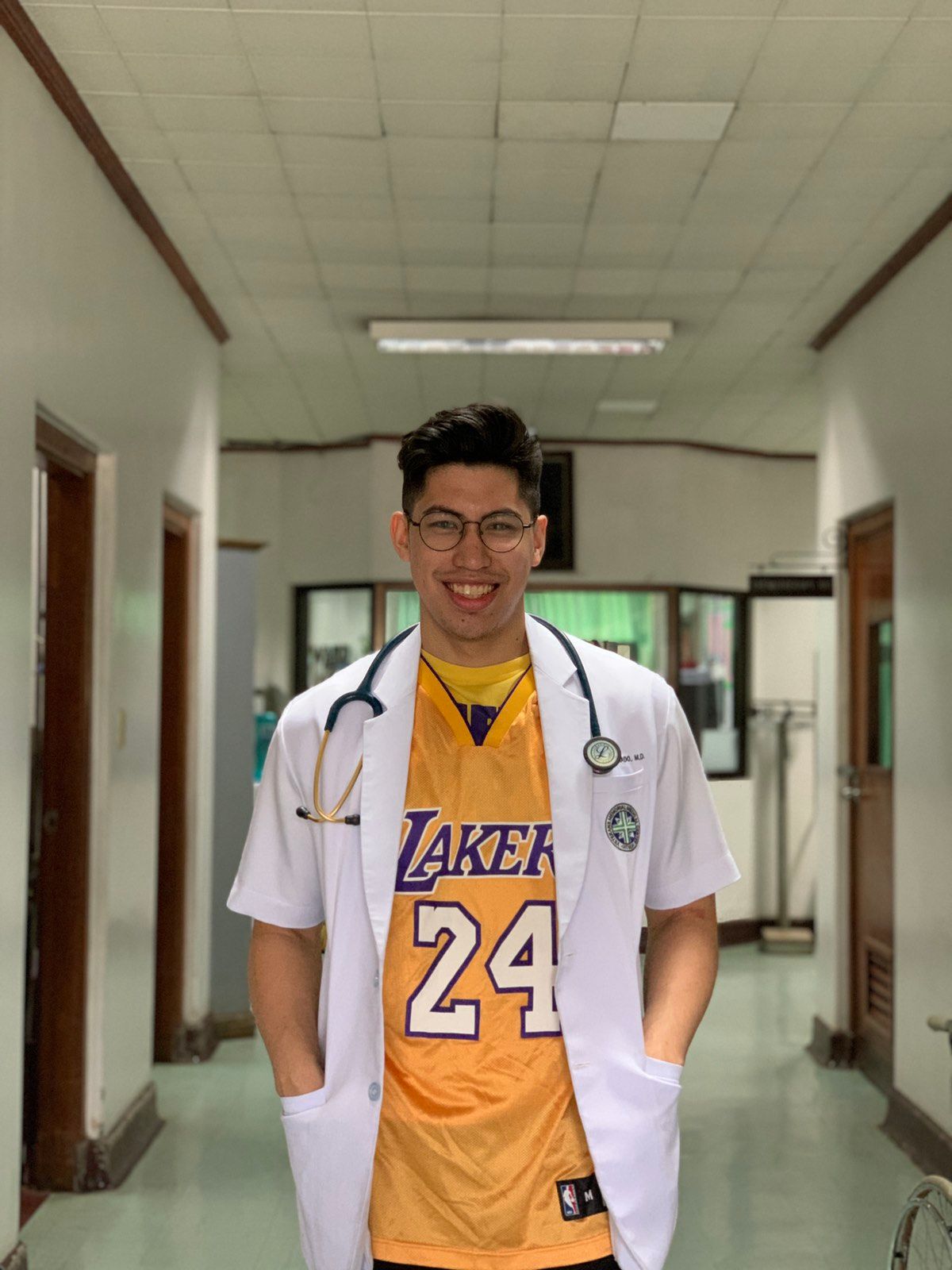 In a way, Adornado's career goal is also his way of honoring his old childhood dream of becoming a big time basketball player.

Has he given up on that dream entirely?

“I'm very contented where I am. I have closed that door,” he said, then stopped himself, laughing. “Well, baka bukas pa siya nang kaunti. May hangin nang kaunti. Kaunti lang naman. Crack lang.”

As it is, though, “I think that I can do more in the world where I am now, as a doctor, and my goals in trying to be a rehab doctor for the Philippines. Because I can touch more lives in a more positive way. And I think being a doctor is a higher goal that I have committed to.”