WHEN Samboy Lim was rushed unconscious to the hospital after collapsing during a Legends game last November 28, netizens were quick to offer prayers and words of support for one of the PBA’s greatest players.

One particular gesture caught my eye - a photo posted on Facebook of three jerseys bearing the No. 9 from notable teams the ‘Skywalker’ played for during his illustrious career: the 1989 San Miguel Beermen that accomplished a rare grand slam, the Ron Jacobs-led Northern Cement team composed of future PBA stars that won several international tournaments in the 80s, and the 1986 Philippine team that brought home an Asian Games bronze medal from the Seoul Asian Games.

The photo was shared by Alvin G. Giolagon, a UST schoolmate. My interest piqued, I queried Alvin on Facebook and asked how he came about the said jerseys.

After a brief exchange, I discovered that to describe the 39-year old lawyer as an avid jersey collector is an understatement. While most sports fans are content with a uniform or two to display their loyalty to their favorite teams, the collection of this Arellano Law grad, at last count, stands at a whopping 71 jerseys, each representing a specific Filipino athlete in the PBA, Gilas Pilipinas, the Azkals and the Philippine Volcanoes.

Buoyed by his passion for Pinoy hoops, Alvin said he began collecting in 2003. His first acquisition was a replica of the 2002 Busan RP team No. 14 jersey worn by Asi Taulava. He currently has 26 jerseys representing the RP/Gilas teams in his ever-growing collection.

“Before, I only wanted any RP team jerseys, whoever the player is. When I shifted to the PBA, I decided that I'll collect the Top 25 PBA Players. Kaso sa Greenhills at Divisoria, they only offer the popular ones so kung sino lang available, one jersey per team,” he told SPIN.ph. 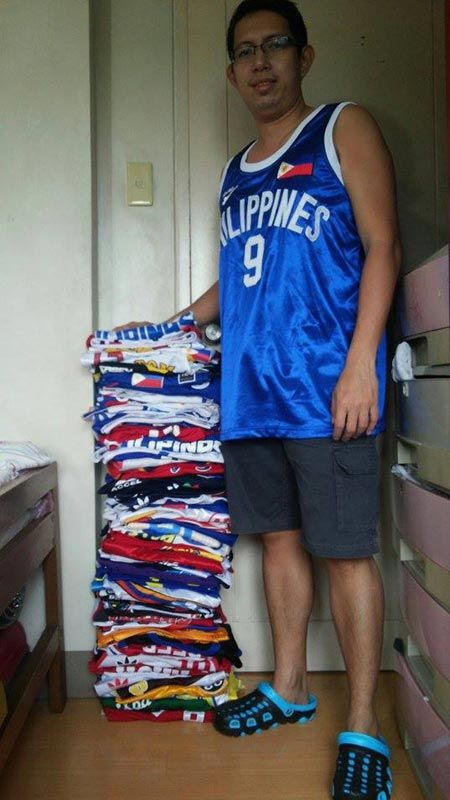 Aside from the tiangges, Alvin looks for jerseys in uniform shops such as Allendale, a “suking sastre sa Quiapo at Kamuning” and a contact on Facebook.

To make sure that his jerseys are as accurate as possible, he conducts research by scouring through photographs on the internet and in archived magazines.

As for actual game-worn jerseys, he does have one from one of the Master Game Challenge exhibition matches. “Bigay ng pamangkin kong bouncer/security guard sa Smart-Araneta. Naarbor kay Chris Tiu,” he said.

Interestingly enough, Alvin does not have jerseys from NBA teams but has examples from Asean Basketball League (ABL) champions Philippine Patriots and San Miguel Beer and the 2006 UST Tigers UAAP men’s basketball champions.

Among his latest additions are a Gilas No.13 jersey worn by point guard Paul Lee when he played as ‘Paul Dalistan’ in the recent 2014 Incheon Asian Games and Manny Pacquiao’s Kia Sorento No.17 uniform.

The collection has gotten so large that he has already given away some jerseys to make room for newer versions as well as his young son's own jerseys.

Asked which jersey he would choose if he could only keep one piece from his prized collection, he said he would choose the 90's era Gordon Gins Boars jersey of the younger half of the only father-son pair who played in the PBA, Dudut Jaworski, the son of his idol Robert Jaworski. 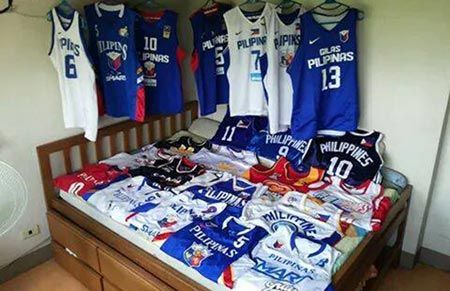 According to him, prices and quality vary depending on the source.

Official replicas cost from P700-800 but the designs leaves much to be desired - the faulty workmanship, no surnames and, worse, no numbers. Whereas those sold in Greenhills and Divisoria even have the corporate sponsor and uniform branding. For the same price, Alvin said his custom-made jerseys are as accurate as possible, made from quality fabric and have complete patches.

The jerseys are actually used for their designed purpose since Alvin has been playing hoops since his days at UST and Arellano Law. He occasionally plays for teams from Shangri la and the DILG where he works.

After the PBA released its list of 40 Greatest Players, SPIN.ph asked if he would collect the additional players as well.