A Pinoy architect has entered the top 16 of an international world sneaker design competition.

Archie Tolentino of Quezon City is the only Filipino in the Pensole World Sneaker Championship, a contest sponsored by US-based retail chain Footlocker. Majority of the contestants are from the US and are joined by aspiring shoe designers from Canada, China, France, Poland, Mexico and India.

At stake is a position at the Pensole Design Academy and the winning design to be manufactured by a designer shoe brand.

“Gunning for a third straight win against another voting heavyweight and most represented country in the tournament. The competition gets tougher as we are down to the last 16 entries,” the architect at ATMA Architecture wrote on his personal Facebook page.

The inspiration for Tolentino’s entry, 'El Provernir' (The Future), is a tribute to a Filipino company in the 1930s that aims to bring a modern spin to an athletic and sporty lifestyle shoe.

“The 1930’s, a company thrived as the pioneer of rubbershoe manufacturing in the Philippines. Their flagship ‘Elpo’ went in competition with foreign brands. Their tagline 'Malinis at Malamig sa Paa' (clean and cool on feet) is my design criteria.”

After defeating a design by Frenchman Simon Leclercq in the previous round, Tolentino is going head to head with Kurtis Hoffman of the US in the sneaker competition that has been held since 2010.

“Going against the US and carrying the underdog status (as from the start of this tournament), I am asking again for your votes," Tolentino said.

“If you see him sketch and how he sees things out, it’s crazy. Everything is very considered. I think every young designer can learn a lot (from him),” said Pensole designer and selector Stefan Cristobal, a fellow Filipino and University of Oregon student who won the competition in 2014.

No email or registration are needed to support Tolentino by voting for his entry at www.worldsneakerchampionship.com. Votes can be cast until April 1 (Manila time). 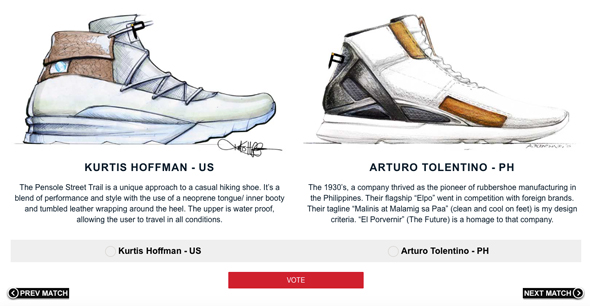