So, what if we told you that Nike, one of the major purveyors of your strange obsession, is asking you to purposely draw on your Triple White Air Force 1s in the name of self-expression?

It sounds crazy, right? Just look at this white-on-white basketball shoes, an icon in sneakerdom, one of the best-selling athletic shoes of all time. It's perfect: 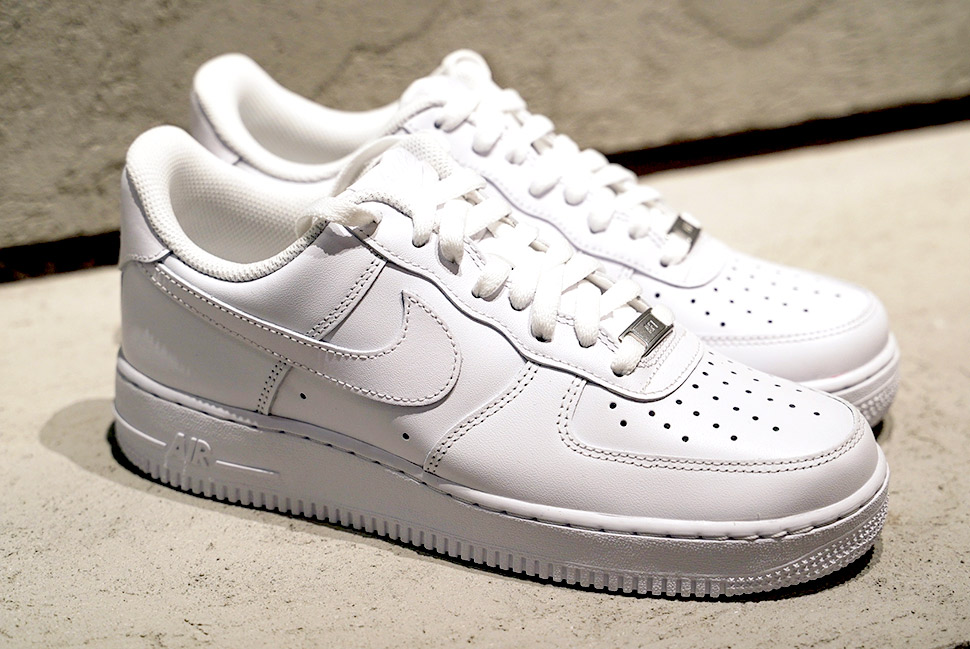 To mar that its flesh would be a crime, but the AF1 really has a colorful 36-year run. Because everyone wanted to, not only be seen in an AF1, but more important wear a unique iteration of the ubiquitous style, the shoe has been co-opted by artists, musicians, and collectors as a canvas for creation.

In short, the white-on-whites became vehicles for all sorts of customization using paint, patches, or appliques to create drippy-drips, all-over logos, holograms, and more. Whatever you can think of, it's probably been done. 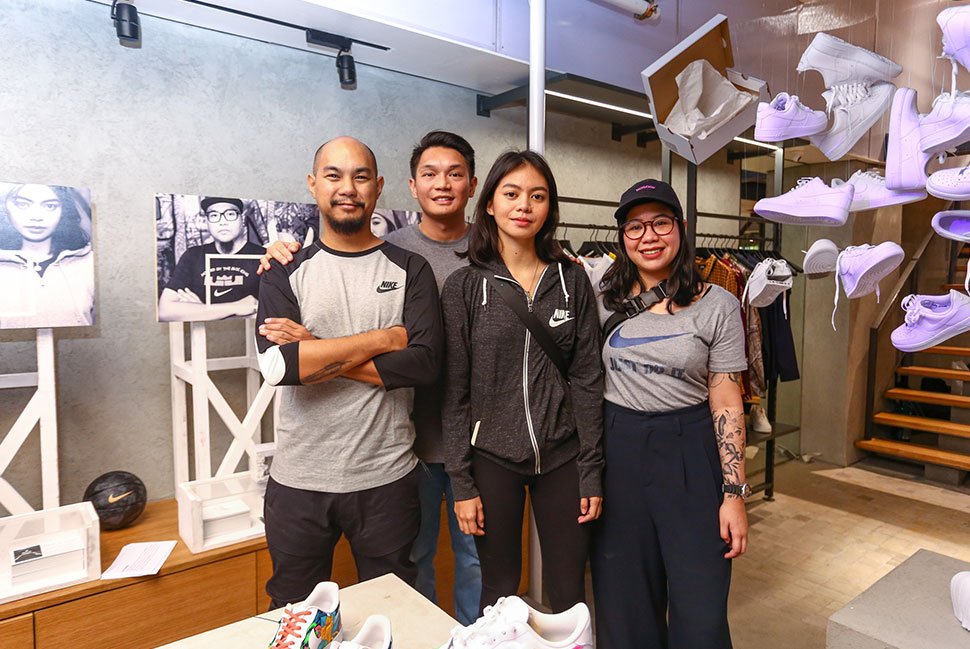 As part of Nike Battle Force, the local outpost of the Swoosh celebrates this aspect of the AF1 by putting together the Blank Canvas Collective, a group of artists that transformed the silhouette into something else. Here's what they came up with: 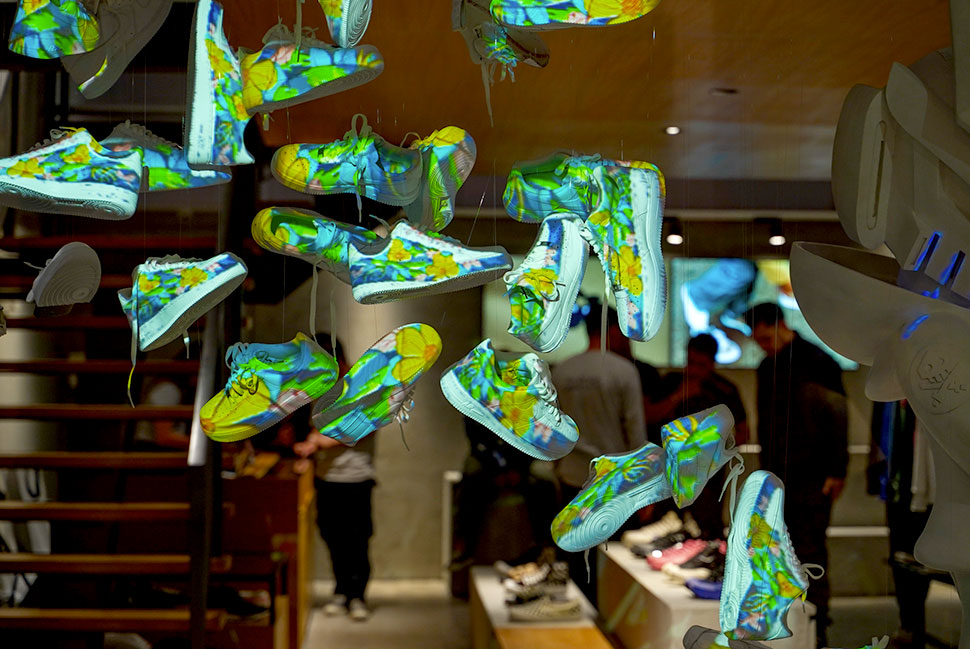 Continue reading below ↓
Spliced and diced AF1s are suspended in the air to create a sculpture that also doubles as a canvas for projection mapping. IMAGE: Nike Philippines

Cosio, who has curated over 50 public art projects for various companies, expanded the idea of the AF1 as a canvas. Rather than creating a painted surface, he suspended several AF1s in the air to form a sculpture.

The white shoes, some diced and spliced, spill out of a shoe box to land on the feet of a giant TEQ toy (more on that below). The sneakers come in various sizes to depict the different times we enjoy the AF1. Raise your hand if you've been wearing these since you were a baby? 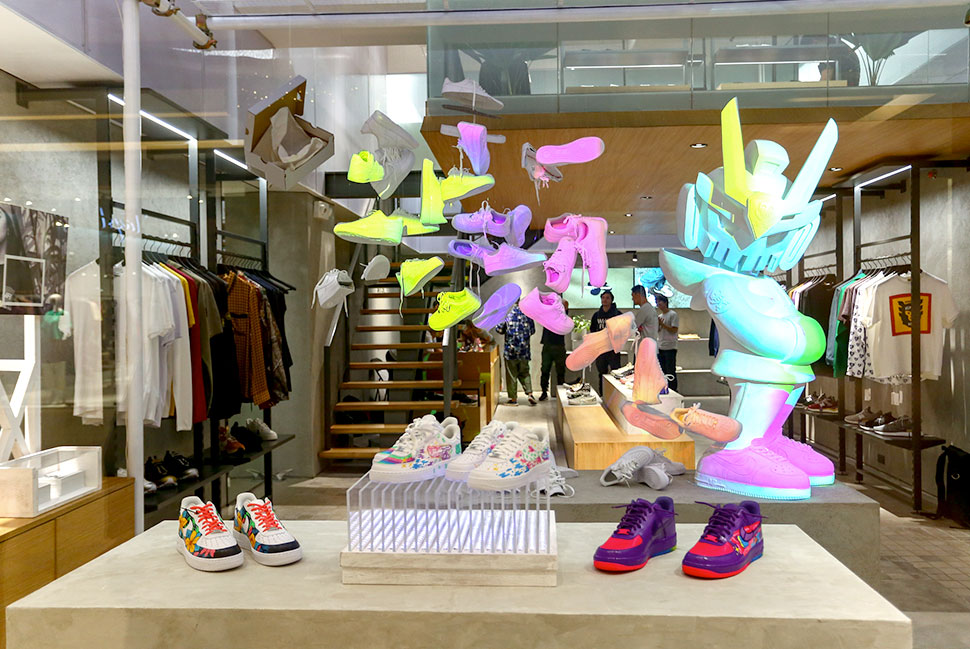 Continue reading below ↓
Cosio's flying AF1s spill out of a shoebox toward the feet of a giant AF1 toy. IMAGE: Nike Philippines

One more aspect of the installation is as a canvas for projection mapping. A light show and also the design of another artist flash on the collection of white sneakers. There were around 25 pairs of shoes when Cosio started the piece, but the projection guys asked him to trim down the number for a more balanced feel (he's not sure how many pieces there are now).

This Giant AF1 Toy by Quiccs 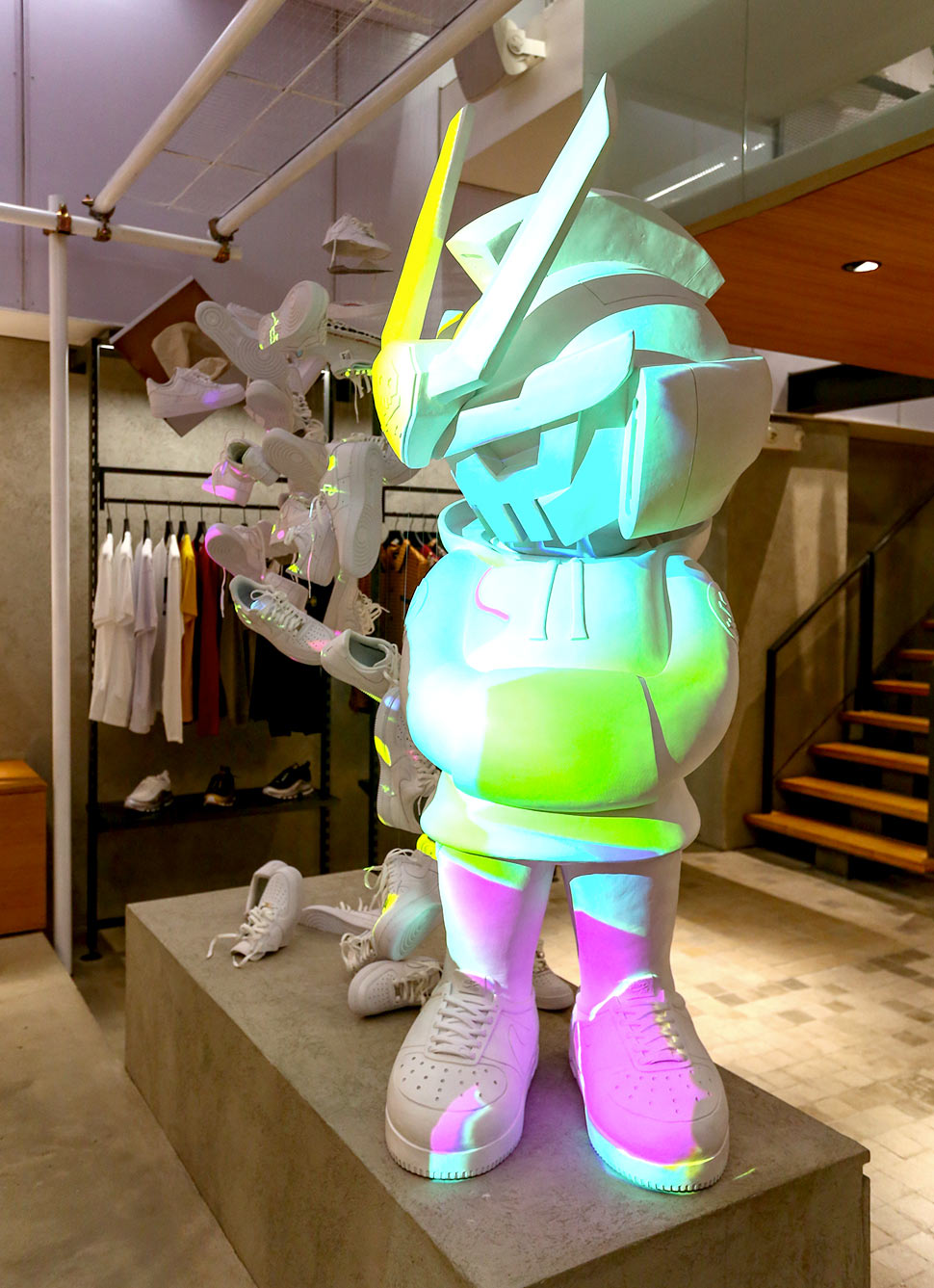 Continue reading below ↓
Inspired by Japanese robot characters, the AF1 toy, which wears a gigantic pair of AF1s, feels both retro and futuristic. IMAGE: Nike Philippines

Cosio's shoes hurtle toward a gigantic pair of shoes whose wearer is a fiber-glass-and-resin AF1 toy model made by illustrator and toy designer Quiccs. Based on the artist's TEQ toys, the model sports Gundam elements and feels both retro and futuristic. The sculpture is also rendered in white to highlight the AF1s status as platform for customization. 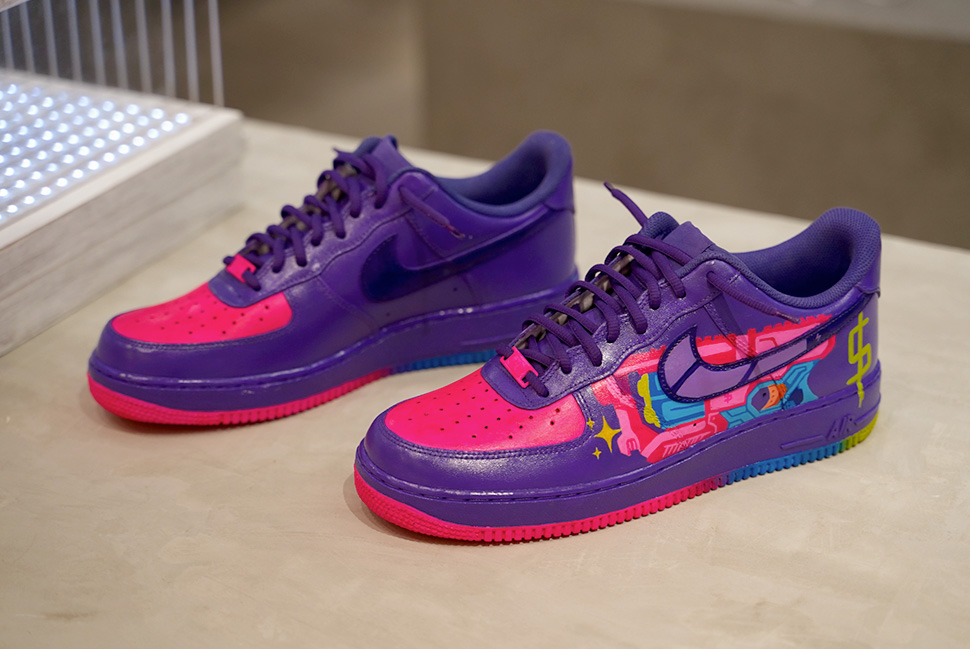 Also known as SYN, the artist adds the point of view of a classically trained painter who is now doing street art. Her rendition of the AF1 covers the entire surface in a heady mix of (a Thanos-like) purple and hot pink. Key figures in the work is a toy gun and an X mark. The first represents the freedom to do what you want, while the latter signifies taking back what is yours. 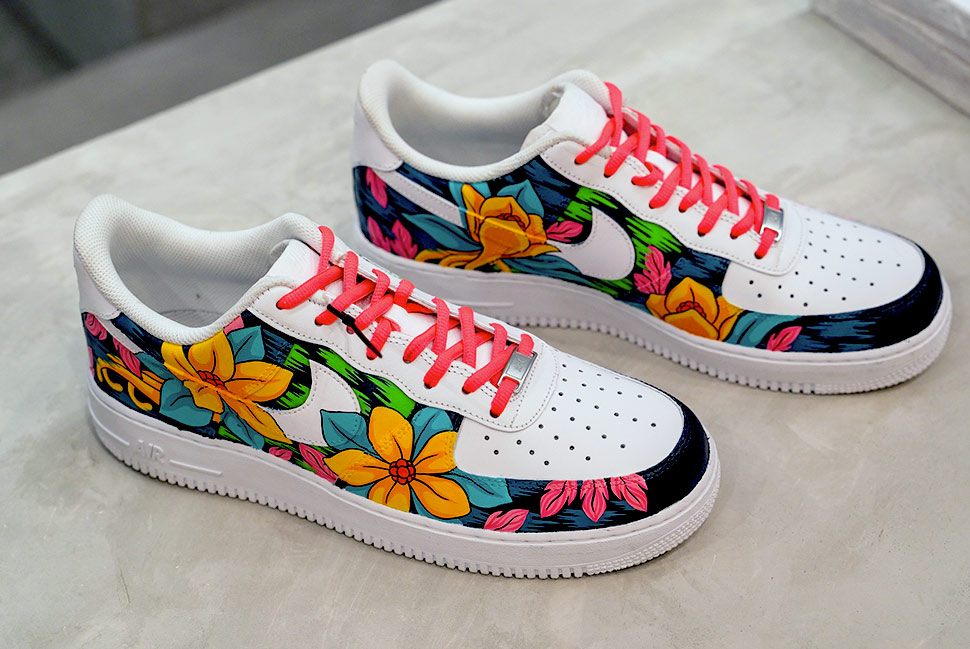 The illustrator showcases the possibilty of the AF1 as a painter's canvas. On the white sneaker, Larri embeds several Columbine flowers against detailed background work. The orange blooms belie a darker meaning: Apart from being poisonous, its genus name, "Aquilegia," means eagle, while "columbine" is dove. As symbol of both predator and prey, the artwork is meant to evoke courage and grace.

It's Your Turn to Customize the AF1

Those two traits may just be what you'll need to take a colored marker onto the skin of an AF1: courage to nullify the blankness of a new sneaker and grace to execute a doodle that makes sense. 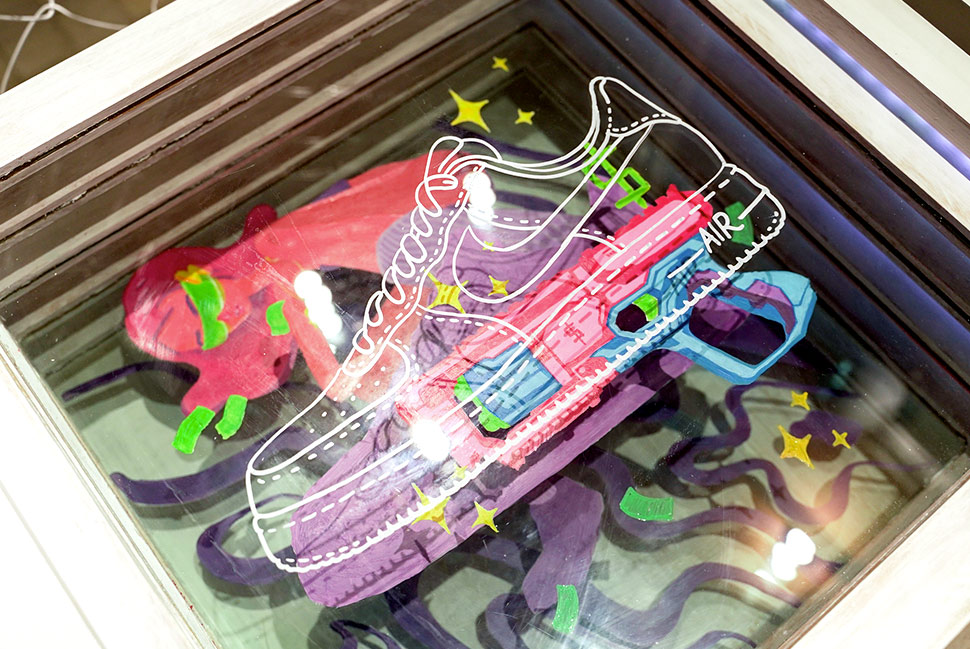 If you need inspiration, the artist's creations can be viewed over at Commonwealth in Power Plant Mall. That's also where you can get a pair of Triple White Air Force 1s, your blank canvas that comes with a free DIY customization kit.

And if you're still hesistant, here's something that will compel you to take a laissez faire stance to the recoloring of a brand-spanking-new pair of AF1s: You can submit your creation to Nike Philippines (they will be judged by the Collective) for a chance to win a limited-edition AF1 toy by Quiccs (but not the giant one). 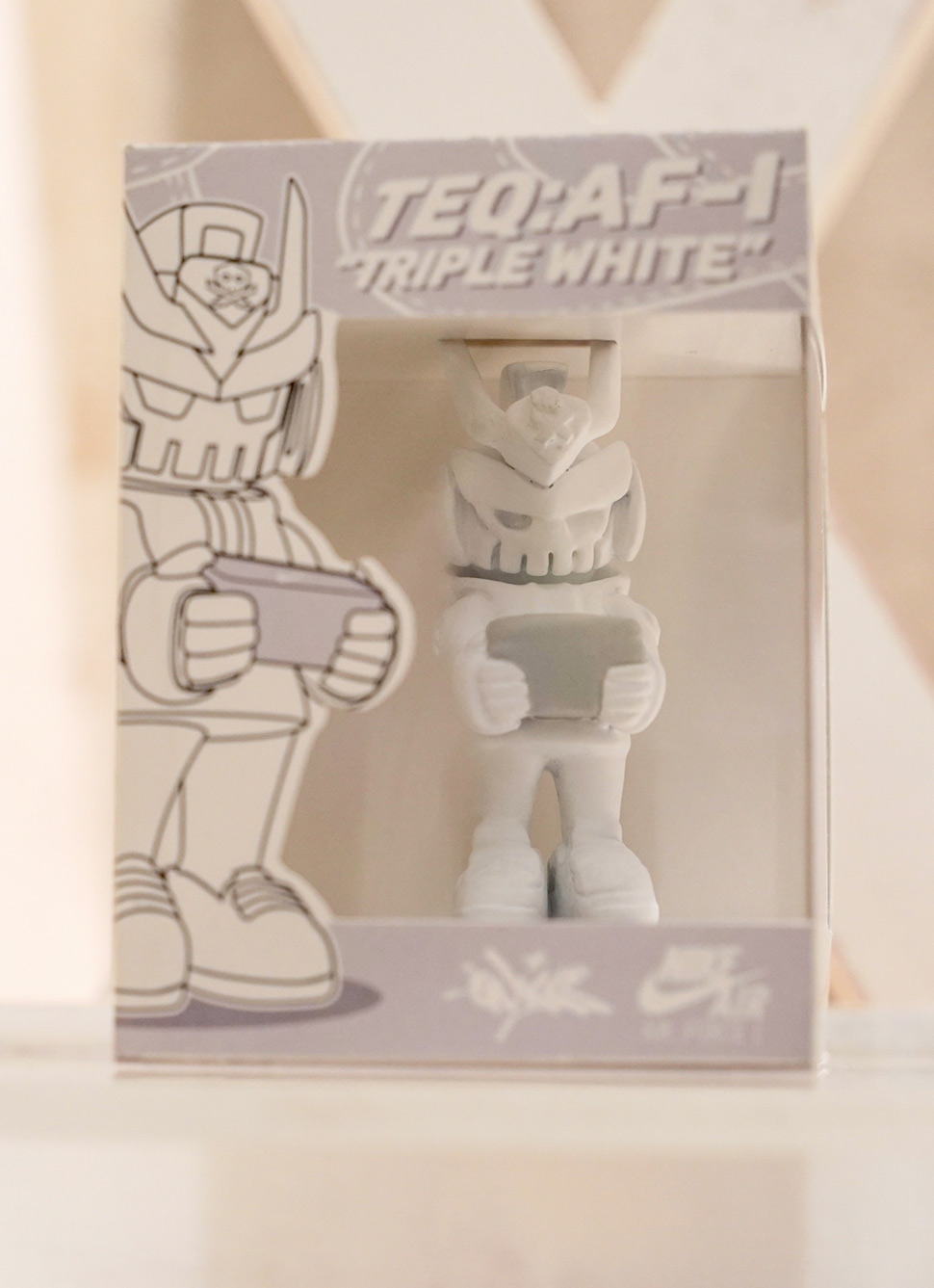 Continue reading below ↓
Customize your own Triple White AF1 and get a chance to win this limited-edition AF1 toy. IMAGE: Nike Philippines

It's really okay to do this. Cosio brings attention to the open nature of art: While an artist inserts his faith and feelings in his work, the viewer can find something else, something more personal, outside of the creator's influence. He says, "Even if a canvas is painted on, it's still blank because you still have your say... We design our own future." In other words, make it your own. 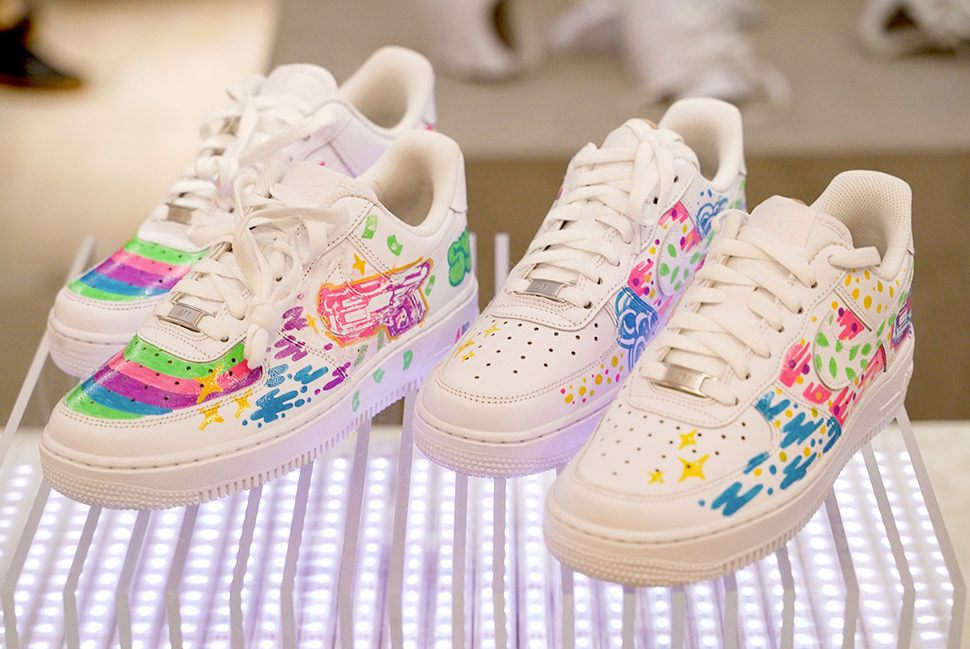 Continue reading below ↓
Do you dare take colored marker to the pristine flesh of a white sneaker to make it your own? IMAGE: Nike Philippines

The Nike Air Force 1 tribute can be viewed at Commonwealth, Power Plant Mall, this month.