Hallasgo outraced its top competitor April Rose Diaz throughout the race to win the women’s division with a time of 3:06:28, while newcomer Nerza nabbed his debut marathon win in the men’s top honor with a clocking of 2:32:50.

Around 30,000 runners from the 3K, 5K, 10K, 21K and 42K races gathered to join the country’s longest and biggest footrace series which started and ended at the SM Mall of Asia Grounds in Pasay City. Participants were in high spirits over the overcast weather, making this year’s Manila race a perfect day for a morning run.

Winners Nerza and Hallasgo will each take home the top purse of P50,000.00 in cash and a trophy, and booked their slots to the National Finals in Tarlac City on January 2020 to try and claim the MILO Marathon King and Queen titles. 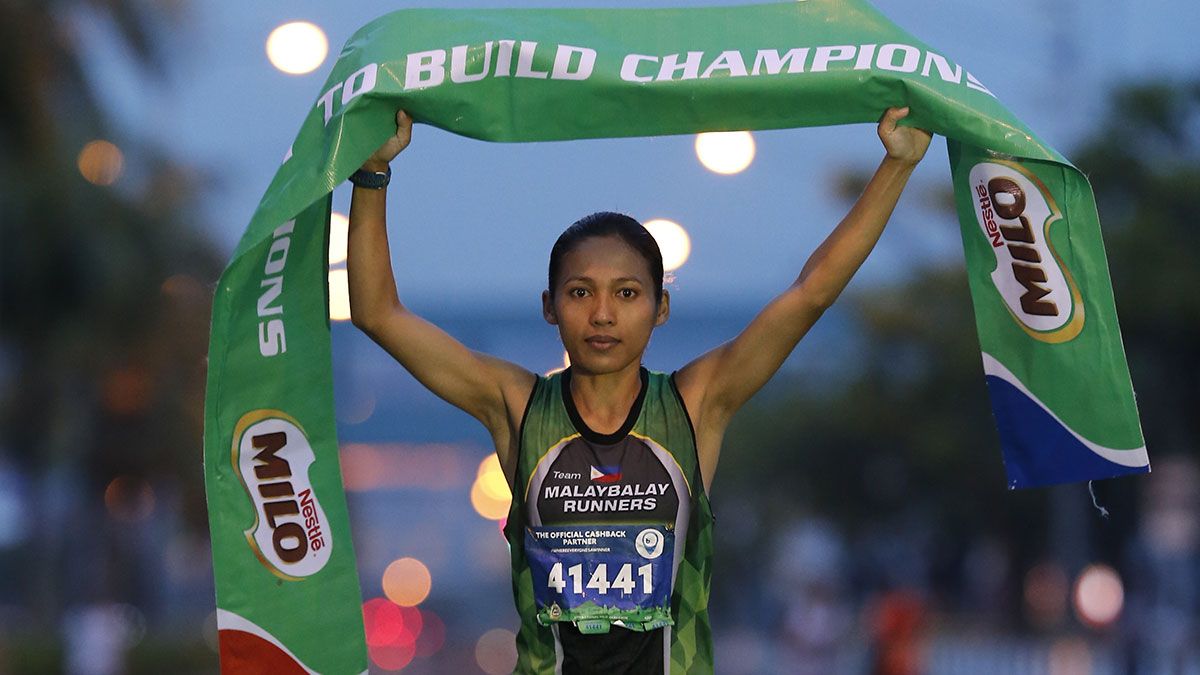 Despite training for only two weeks, Hallasgo managed to preserve a swift and steady pace against runner-up Diaz, keeping a cool one-kilometer distance against the latter throughout the race.

Under the mentorship of National MILO Marathon record holder Eduardo “Vertek” Buenavista, Hallasgo kept a stringent regimen regardless of the very short lead time she had to prepare for. With her sheer will and determination, she was able to breeze through the thoroughfares without a hitch.

In the coming months, the 26-year-old mother of one will set her sights for the SEA Games after qualifying for the 10K event in the National Games that took place in March. But with her newfound victory, she may also consider to vie for the marathon event if given the chance.

On the men’s side, it’s a different story for 29-year-old Nerza when the race broke out at the gun start. The Davao native had a different approach in relegating his opponents, most especially Jeson Agravante who came in third place.

Beating the odds, Nerza’s grit and resilience prevailed, which enabled him to break away past Agravante while enduring an excruciating foot pain in the last nine kilometers.

trophies to the winners at the awarding ceremonies.

Intensifying its advocacy in getting more children into sports, MILO along with Philippine Athletics Track and Field Association (PATAFA), have introduced a new innovation at the event with the Run,

Jump, Throw program. The activity is designed to help prepare the physical readiness of children for them to engage in other sports.

The 2019 National MILO Marathon is endorsed by the Department of Education, Philippine Sports

Commission, Philippine Olympic Committee, and sanctioned by the PATAFA. The 2019 National

MILO Marathon is organized by RunRio Events Inc., and supported by its official partners: Salonpas,