THE Philippines validated the title as the newest sensation in world dragon boat racing after claiming two gold medals at the expense of Russia on Friday in the International Canoe Federation-organized World Championships at the Idroscalo water sports club in Milan.

Aside the two golds, the Filipino paddlers also claimed a silver as they went 2-1 in their head-to-head duel with the mighty Russians. 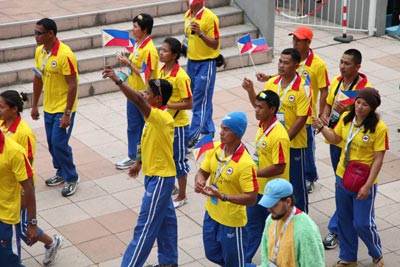 Poland was third in 2:16.667 ahead of Germany, Sweden, and the Czech Republic in that order.

Before hundreds of unbelieving paddlers from 14 other countries, the Filipinos shaved five seconds off their qualifying time in the event which pricked Russia’s vaunted pride as an “untouchable” in the 500-meter distance races.

Sensing war against rivals clearly just half their size in heft, the Russians left nothing to chance and pooled its freshest crew anchored by two-time Olympic singles canoe gold medallist Mikhail Opalev, and simply overpowered the opposition in the 20-mixed event (12 men, eight women) in 1:54.631.

Obviously outmuscled, the Philippines settled for silver in 1:55.676, while the Czech Republic took bronze in 1:56.926, well ahead of the tournament’s big letdown, Hungary, Germany, and France.

Before the end of the day, however, the Filipinos still had the last laugh.

Slightly unnerved by the taunting of the Russians, who gave them the thumbs down sign after the 20- mixed crew race, the Filipinos assembled their best six male and four female crew to return the favor to the Russians in the day’s most thrilling race, the 500 meter 10 mixed event that was decided by one mad finishing kick, Pinoy style.

Reduced to close-range spectators were the Czech Republic, Hungary, and the United States at fourth, fifth, and sixth places.

“This is a big bonus for us because we prepared heavily for the 200 meter races,” said head coach Len Escollante with whatever little voice she had left after the heavy cheering along with the Filipino community here and officers of the Philippine Consulate.

Saturday is another big day for the Filipinos who are confident that their hard training will qualify the team to be called the Lamborghini Diablo of dragon boat racing when it came to the 200-meter races.

The RP paddlers will campaign in the elimination phase of the 200 m events in all-men 10, mixed 20, mixed 10, and venture in the all men 2,000-m race with no expectations.