Zaragosa, Pagdanganan in control in PH Am tilt

RUPERT Zaragosa picked up eight shots in his first 16 holes on Saturday before settling for a six-under-par 66 and a seven-shot lead over Rico Hoey going into the final 18 holes of the NGAP’s Philippine Amateur Closed championship at Sherwood Hills in Trece Martirez, Cavite.

The Philippine Putra Cup team member closed out bogey-bogey, but the 15-year-old wonder kid from Canlubang still practically put his fourth national title in the bag with a 54-hole 206 total.

Hoey, who will be joining Zaragosa, Jobim Carlos and Jonathan Delos Reyes in Southeast Asia’s team championship, fired a 70.

Lloyd Jefferson Go, an 18-year-old shotmaker from Cebu, broke par for the first time in three days to wrest third place, six strokes behind Hoey. Delos Reyes, a 19-year-old Fil-American, managed a 73 and was a further two strokes behind. 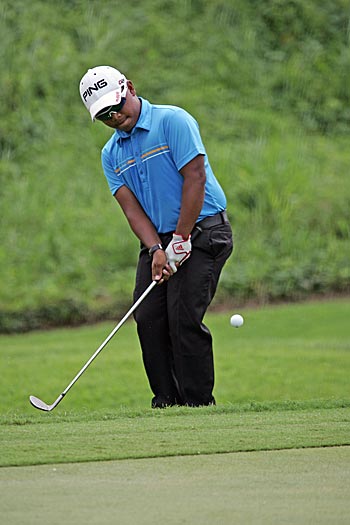 “I’m excited in winning another title,” said Zaragosa, who eagled the par-5 No. 15 for the second straight round. “But it will all still depend on how I play the final round. Nothing is certain in a course like this.”

Zaragosa’s four-foot putt for par on the 17th lipped out then he three putted for bogey on the closing hole.

Basti Lorenzo matched par for 223, with Carlos struggling to a 76 to sit another shot back.

Bianca Pagdanganan, meanwhile, carded a 70 and wrested control of women’s play from Regina De Guzman, who now trails by three after a 73.

Pagdanganan will take a 219 aggregate into the final round of the PLDT Group Amateur Tour event presented by the MVP Sports Foundation and backed by Pancake House, Nike, Golf Depot and Pacsports.

Simone Hoey is seven shots back after a 75.