BROOKLINE, Massachusetts — Eight players spent time atop the leaderboard, all of them getting kicked around — some worse than others — on a US Open course that felt every bit like the toughest test in golf on a cool, windy afternoon at The Country Club.

Saturday (Sunday, Manila time) was a classic US Open, all about survival, a highlight reel of golf carnage.

See Morikawa, Rory alongside a bunch of journeymen in wild US Open weekend

Will Zalatoris and Matt Fitzpatrick kept the damage to a bare minimum, giving them another crack at a major championship that is 18 holes away and feels so much longer.

Zalatoris, who lost in a playoff at the PGA Championship last month at Southern Hills, made only one bogey — a staggering feat on a beast of a Brookline course — for a 3-under 67.

"Felt like I shot a 61," Zalatoris said. "Whenever I made a mistake I was able to get away with it or pull off something miraculous."

Fitzpatrick played in the final group at the PGA Championship. Now the 27-year-old from England is on familiar turf at The Country Club, where he won the US Amateur in 2013. He was equally steady and ran off three birdies over his last five holes for a 68.

Most telling: They didn't make any double bogeys.

That's what knocked defending US Open champion Jon Rahm out of the lead on the final hole. The Spaniard thought he had seen it all — including a shot he played back-handed from the base of a tree on the eighth hole — until he took three swipes from sand in two bunkers.

Rahm's first shot from a fairway bunker hit the lip and nearly rolled into his footprint. His next shot found a plugged lie in a greenside bunker, and two putts later he had a 71 and went from one ahead to one behind.

Rahm wasn't upset with his swing on the final hole. If anything, he said it was getting dark and he didn't notice his ball sitting down in the sand. The USGA sent the last group off at 3:45 p.m. to maximize television exposure. And maybe he tried to take on too much.

Either way, he was in no mood to look anywhere but ahead. 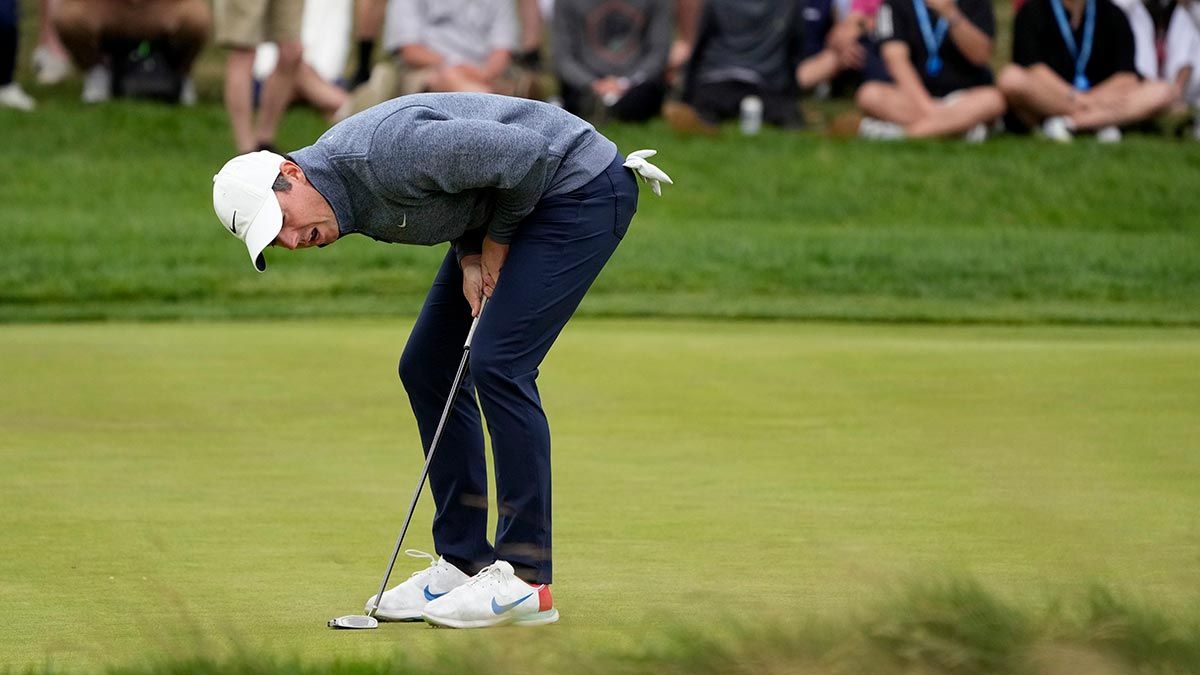 Rory McIlroy fires a 73 for a share of seventh spot.

Zalatoris and Fitzpatrick were at 4-under 206, the same score of the 54-hole lead when the US Open was last at The Country Club in 1988.

It's not like Rahm had full rights to the lead. This Saturday at Brookline was so wild that Rahm was the last of eight players who had at least a share of the lead at some point. Three of them didn't even finish among the top 10, including two-time major champion Collin Morikawa.

Morikawa, who shared the 36-hole lead with Joel Dahmen, had double bogeys on the seventh and 13th holes, and might have had a third after a chunked wedge on No. 4 except that he made a 25-foot putt for bogey. He finished with a 77.

Masters champion Scottie Scheffler was not immune. The world's No. 1 player looked to be pulling away when he holed a wedge from some 80 yards for eagle on the par-5 eighth.

He was at 6 under and cruising until his wedge to a back pin on the 141-yard 11th hole bounced hard over the green and into deep rough. He took two to the green and two puts later was no longer leading. And it only got worse as three straight bogeys followed and he shot 71 to end up two strokes behind

"After that," he said of his double bogey, "I didn't really play that bad. I just made three bogeys in a row. I didn't do anything that bad. It's just U.S. Open. Things happen like that, and they happen quickly."

Seven of the top 12 players going into Saturday made at least one double bogey.

Rory McIlroy was not on that list. His was more of a slow bleed, mostly from a putter that wasn't behaving. He made one birdie in his round of 73.

All that, and this US Open was far from settled.

"It was one of the toughest days on a golf course I've had in a long time," McIlroy said. "I just needed to grind it out, and I did on the back nine. To play that back nine at even par today was a really good effort, I thought. Just kept myself in the tournament. That's all I was trying to do. Just keep hanging around."

Twenty-three players were under par going into the third round. Only nine remain with 18 holes remaining, all of them separated by three shots.

That includes a local star — maybe not the Francis Ouimet variety, but Keegan Bradley is big enough in Beantown that he heard his name chanted loudly and proudly as he marched up toward the 18th green. A former PGA champion, he called it "probably the highlight of my whole entire life."

He gave them reason to cheer. Three over through seven holes, Bradley answered with passion and birdies, five of them over his last 11 holes for a 69.

He was two shots behind with Adam Hadwin (70) and Scheffler. McIlroy was three back along with Sam Burns (71) and Dahmen, who didn't make a birdie in his round of 74 but stayed in the game because he didn't have any big blunders.

The average score was 73.5 and only seven players broke par. Denny McCarthy made the cut on the number at 3-over par. He finished his 68 before the leaders even arrived at the course. By the end of the day, he was tied for 11th, five shots behind.