HILTON HEAD ISLAND, S.C. — Webb Simpson and Bryson DeChambeau were trading birdies with vastly different games. Rory McIlroy ran off enough birdies to make the cut. And the biggest move of the day at the RBC Heritage belonged to a player who made it to the course, but not the tee.

Nick Watney became a footnote in golf history Friday as the first player to test positive for the coronavirus.

"I was a little shocked, to be honest," said Vaughn Taylor, who played with Watney in the opening round and went for testing immediately after his 69. "Heart started racing, got a little nervous. Just hope Nick's doing well and we get through this."

Watney tested negative when he arrived Tuesday, experienced symptoms Friday and took another test that came back positive. He now faces self-isolation for at least 10 days as the tournament goes on. 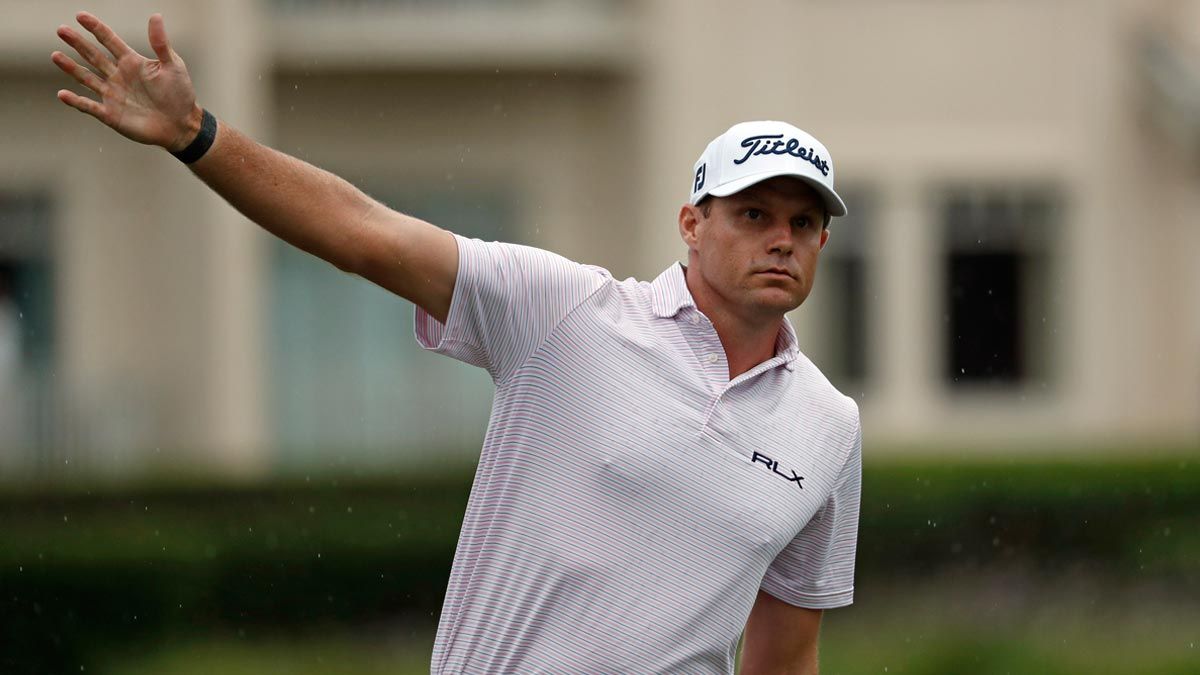 The weekend buzz at Harbour Town figures to be about more than just birdies and bogeys.

Simpson got the last word with a 6-foot birdie on his final hole at No. 9 for another 6-under 65, giving him a one-shot lead after another day of watching DeChambeau and his additional 40 pounds of mass swing out of his shoes for a 64. DeChambeau made six birdies on his back nine, missing a 5-footer on the last that would have tied for the lead. Corey Conners also was one back after a bogey-free 63.

"It's very satisfying knowing I'm not near as long as some of these guys and I'm able to kind of use my skills of distance control and shot shape to pick me back up when I'm 40 yards or 30 yards behind these guys," Simpson said. "I would like to hit it further. I set out on a journey three years ago to get stronger, hit it further, but do it a lot slower than Bryson. But he's made it look easy and seamless."

Simpson was at 12-under 130, and scoring remained bunched. Thunderstorms that rolled through the island and halted play for two hours only gave players more time to talk about Watney and the ramifications. McIlroy and Jordan Spieth, who is on the PGA Tour policy board, said a positive test was bound to happen as the tour returns from a three-month shutdown because of the COVID-19 pandemic.

"The whole plan put in place was not if, but when somebody tests positive, what's the protocol, and what are the next steps," Spieth said. "So I feel confident, just in being on those phone calls, in what the PGA TOUR's going to do going forward here, and hopefully contact tracing doesn't lead to anybody else testing positive within the bubble." 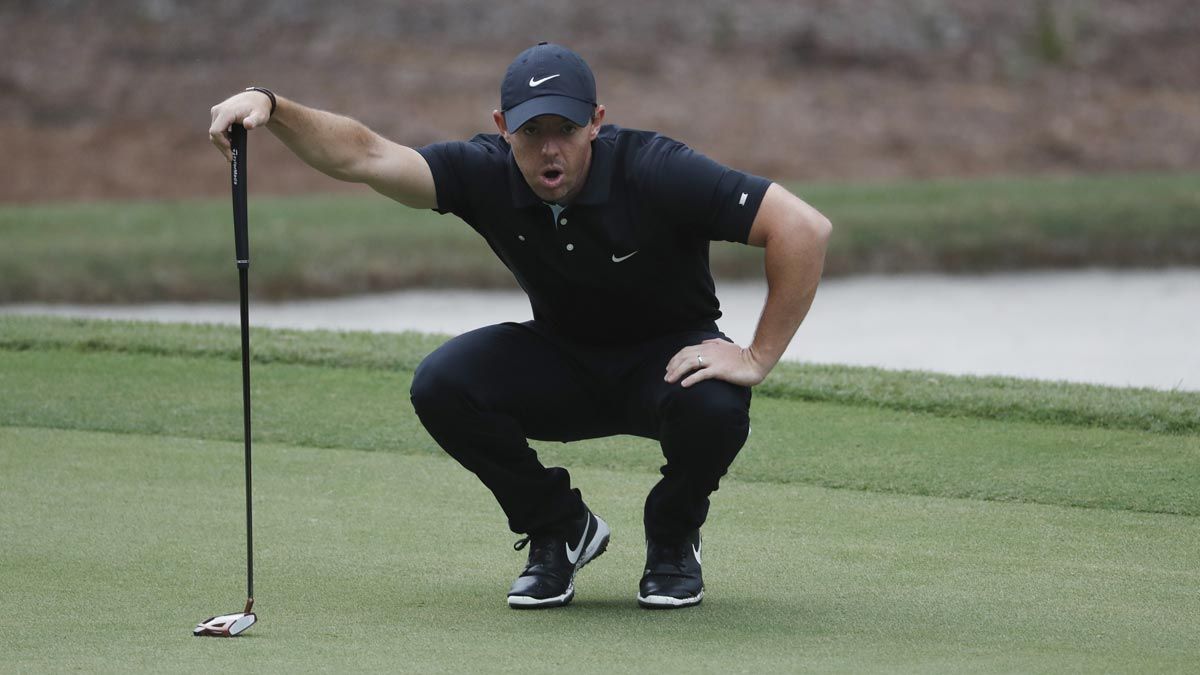 "It's unfortunate Nick got it, but at the same time, hopefully, it stays with just him and doesn't spread," Koepka said. "Because I think we'll have a big issue on our hands if it keeps going as the weeks continue."

For so much of Friday, Simpson had the lead and DeChambeau had the spotlight, with his incredible bulk making him stand out like the lighthouse behind the 18th green.

He decided at the end of last season to get stronger and bigger so he could swing faster and hit it longer, and the transformation has everyone's attention. Even while adding 40 pounds of mass, he hasn't lost his love for science. That was evident on his final hole.

DeChambeau had the honors and let Simpson go first so he could figure out what to do. Simpson poked his hybrid 221 yards down the fairway on the 334-yard ninth hole. DeChambeau opted for a 3-wood, mainly because he feared his driver would go well over the green.

He took two violent practice swings, and huffed out breath like an Olympic weightlifter preparing for the clean and jerk. He sent it soaring only to say, "Ah! Too much spin, dang it." 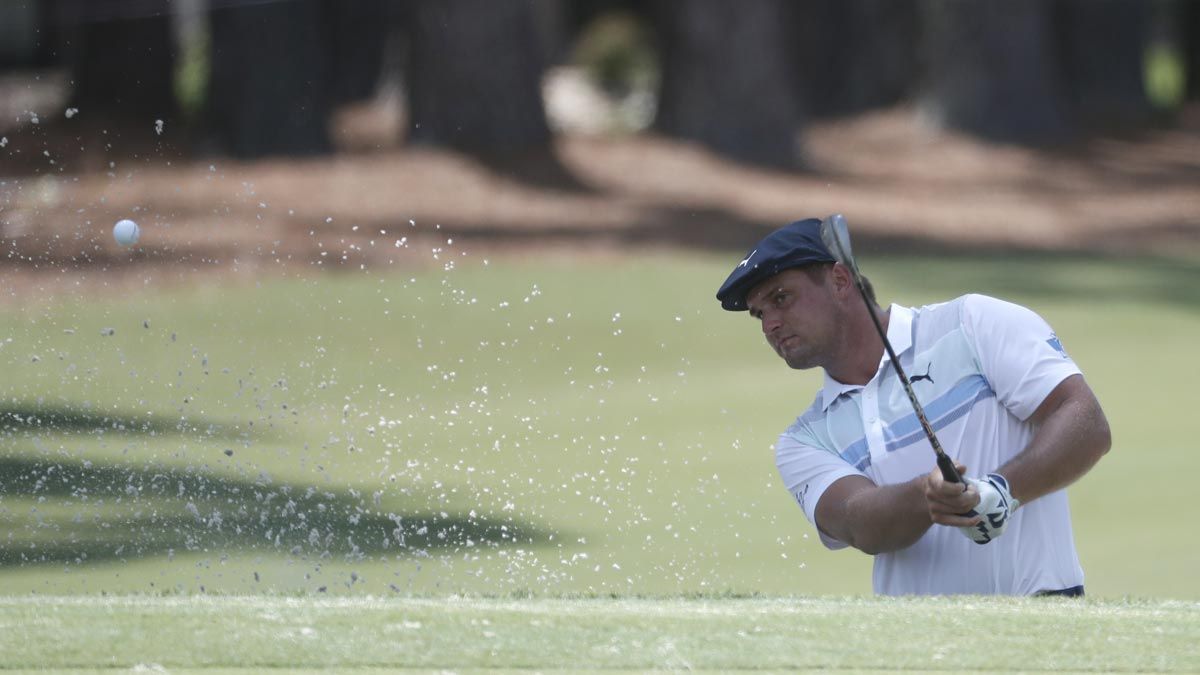 It found a bunker in front of the green, 309 yards away, and he was far more bothered missing the short birdie putt, even though his 64 left him right in the mix again. He hasn't finished worse than a tie for fifth since February — only four tournaments because the pandemic shut down golf for three months.

"He's been able to take this body that he's never played with before and still play just as good, if not better," Simpson said. "So that's really impressive."

The time off didn't appear to hurt, and DeChambeau said time in the gym — and in the buffet line — allowed him to go from a ball speed of about 188 mph to the lower 190s. That doesn't always work at Harbour Town, a tight course that winds through the oaks, and DeChambeau laments that he hasn't been able to "launch the Kraken."

At least he's not holding back at dinner. DeChambeau says his fitness plan is a 2-to-1 ration of carbs and protein and "I literally just have it. I eat whatever, whenever." The majority of bulk is muscle, all for more speed. He believes he can get it up to 197 mph on a course that allows for more drivers.

The biggest benefit is where it leaves him.

"The distance gain has helped me hit 9-irons and pitching wedges into holes compared to hitting 7-irons and 6-iron," he said. "That's a huge change for me that's allowed me to go and attack flags a lot more, be more aggressive, not really have to try and fit it into this little spot down on the fairway out here and really attack those flags."

Simpson has more to worry about than DeChambeau. Twenty players were within four shots of the lead, a group that includes Koepka and Dustin Johnson.