Arnold Villacencio sets pace as Juvic Pagunsan gets off to a slow start at Mt. Malarayat

ARNOLD Villacencio sizzled with a six-under 66 for a one-stroke lead over Jhonnel Ababa and unheralded Chris Mamaril at the start of the ICTSI Classic on Wednesday at Mt. Malarayat in Lipa, Batagas.

Villacencio, seeking a follow-up to his playoff breakthrough win at Summit Point last year, came through with a strong start at Mt. Malipunyo, bucked a lost-ball mishap on the par-5 14th with a birdie on the 18th then came up with a bogey-free 32 at the Mt. Lubo side that moved him past 25 others who turned in under-par scores in mild breeze.

“My irons just clicked and I was able to convert birdies from short distance,” said Villacencio, who birdied Nos. 11 and 12, reeled back when he hit an errant second shot on No. 14 but recovered the stroke with a six-footer for birdie on the 18th.

Villacencio is looking to finally score a win after struggling in the first nine legs of this year’s ICTSI Philippine Golf Tour. He has missed the cut thrice with his best performance a joint 11th finish at the Manila Masters. 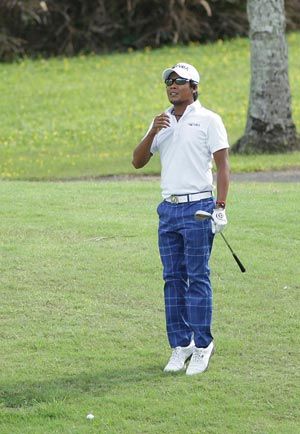 But playing on a course he calls home, Villacencio came up with a solid iron game to set up birdies from close range early and capped his round with a curling 10-footer on the par-5 No. 9 for the lead.

Ababa, out to end a long winless drought on the tour sponsored by ICTSI, actually matched Villacencio’s two-birdie start and a closing 32 but fumbled with two bogeys against one more birdie for a 67 that tied him with Mamaril, who birdied the last three holes at Mt. Lubo to post a career-best start.

Tony Lascuña and Elmer Salvador stayed within striking distance with 69s, while others at three-under were Rufino Bayron, Anthony Fernando, Artemio Murakami and Robert Pactolerin.

Juvic Pagunsan, seeing action on the domestic tour for the first time since 2013, had a bogey-bogey start at Malipunyo and made double-bogey on No. 1 at Lubo but hit five birdies, including two in the last five holes to salvage a 71 and a share of 19th with seven others.

Jobim Carlos, still opting to play as an amateur despite topping the Q-School early in the year, closed out the Lubo nine with four straight birdies but bogeyed two of the last five to settle for a 70 in a tie with Rey Pagunsan, Edward Reyes and Korean Woo Seong Bin.