GEN. TRIAS, Cavite – Miguel Tabuena broke a mediocre run of form with a two-stroke victory in the ICTSI Eagle Ridge Challenge on a closing four-under par 68 on Friday.

Tabuena fought back from three down against Justin Quiban with a frontside birdie-spurt then thwarted Zanieboy Gialon with clutch hits at Aoki course’s finishing holes to end a personal two-year dry spell.

“We just stuck to our game plan and everything worked pretty well for me,” said Tabuena, after nailing the victory on a 282 total worth P360,000 -his first since ruling the Queen’s Cup of the Asian Tour in 2018.

The former two-time Philippine Open champion and former Philippine Golf Tour Order of Merit winner fumbled early but used his experience to produce four birdies in a seven-hole stretch from No. 3 to storm ahead. 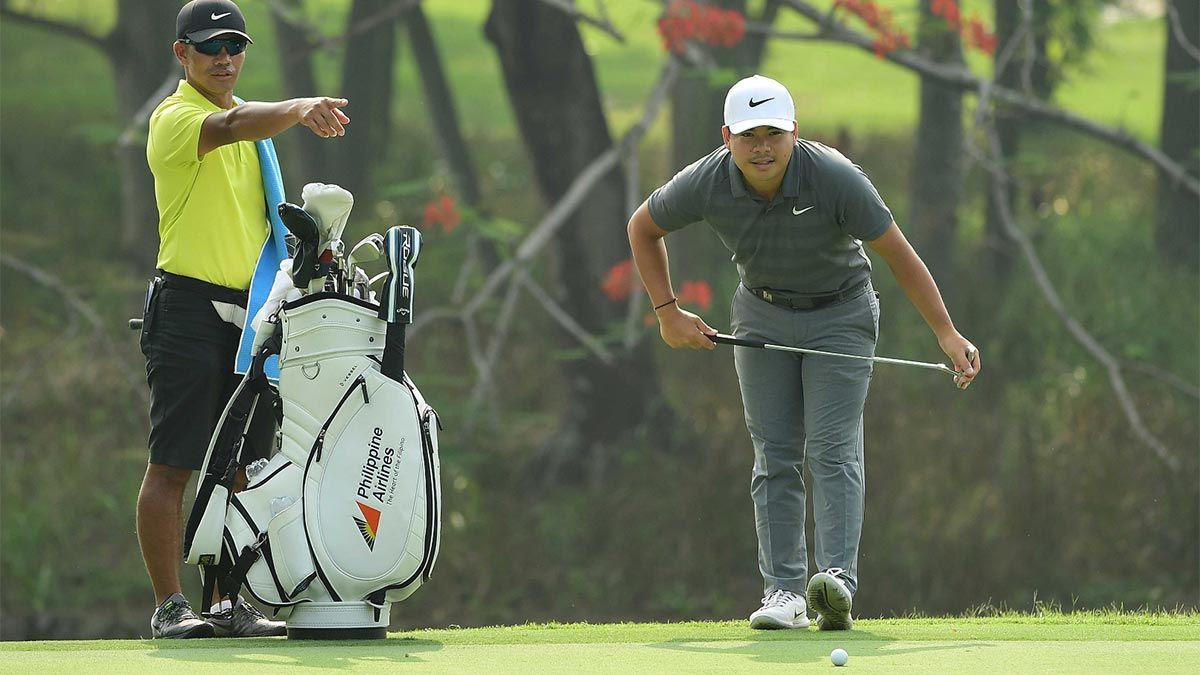 As Quiban faded with a disastrous triple-bogey 7 on No. 13, Tabuena held sway and claimed a two-stroke victory on a birdie-birdie feat from No. 16, frustrating Gialon, who eagled the par-5 16th and birdied the next to get into contention.

“We knew Justin won’t gonna give up as well as Zanieboy. But I guess I have the experience, having played here a few times,” said Tabuena, who notched his second Phl Open at The Country Club in early 2018, his last local triumph before shifting his campaign abroad.

“I was pretty familiar with the conditions and it wasn’t the hardest because the greens were actually in good shape and it was pretty easy to read the putts.”

Tabuena, who never figured in the title chase in PGT’s return in the new normal at Riviera, actually fell behind by as many as three in the early going as Quiban turned a one-shot lead after 54 holes into a three-stroke cushion on a two-shot swing (birdie-bogey) on No. 2.

But he birdied Nos. 3, 5, 6 and 9 to wrest control then watched Quiban crumble on No. 13 before foiling Gialon’s charge at the finish.

Quiban, who took charge with a tournament-best 65 in the second round and stayed ahead despite a 73 Thursday, bounced back with a birdie on No. 15 but yielded the stroke on the next and ended up with a 75 and a 288 for fourth worth P106,000.

Michael Bibat, who tied for the lead halfway through the P2 million championship marking the start of the new ICTSI-sponsored circuit, failed to recover from a third round 76 and hobbled with a 74 for fifth at 290 while Jobim Carlos placed sixth at 291 after matching par 72.

Ira Alido, who dominated the stellar field to score a breakthrough at Riviera Langer, finally broke par with a 71 but could only tie for seventh at 292 with Rupert Zaragosa, who carded a 72.

Jolo Magcalayo also shot a 72 to tie Alido and Zaragosa and claimed the low amateur honors in the event organized by Pilipinas Golf Tournaments, Inc.