Mickelson boosts bid for record sixth title at Pebble, enters final round one stroke off pace

PEBBLE BEACH, California — For his final act on a day filled with short-game magic, Phil Mickelson hit a full-swing flop shot over a bunker that landed in just the right spot on the 18th green at Pebble Beach that it rolled out to four feet from the cup.

Somehow, it didn't go in.

For a time on Saturday (Sunday, Manila time) in the AT&T Pebble Beach Pro-Am, it seemed everything did.

"It seemed like my short game was pretty good today," Mickelson said after a 5-under 67, that final birdie leaving him one shot behind Nick Taylor of Canada as Lefty goes for a record sixth title at Pebble.

Taylor had a cold start and a relatively quiet day at Spyglass Hill, away from all the hits and giggles around the celebrity rotation at Pebble Beach. He overcame two early bogeys with a 25-foot eagle putt on his 16th hole for a 69, and his first 54-hole lead on the PGA Tour. Taylor was at 17-under 198. 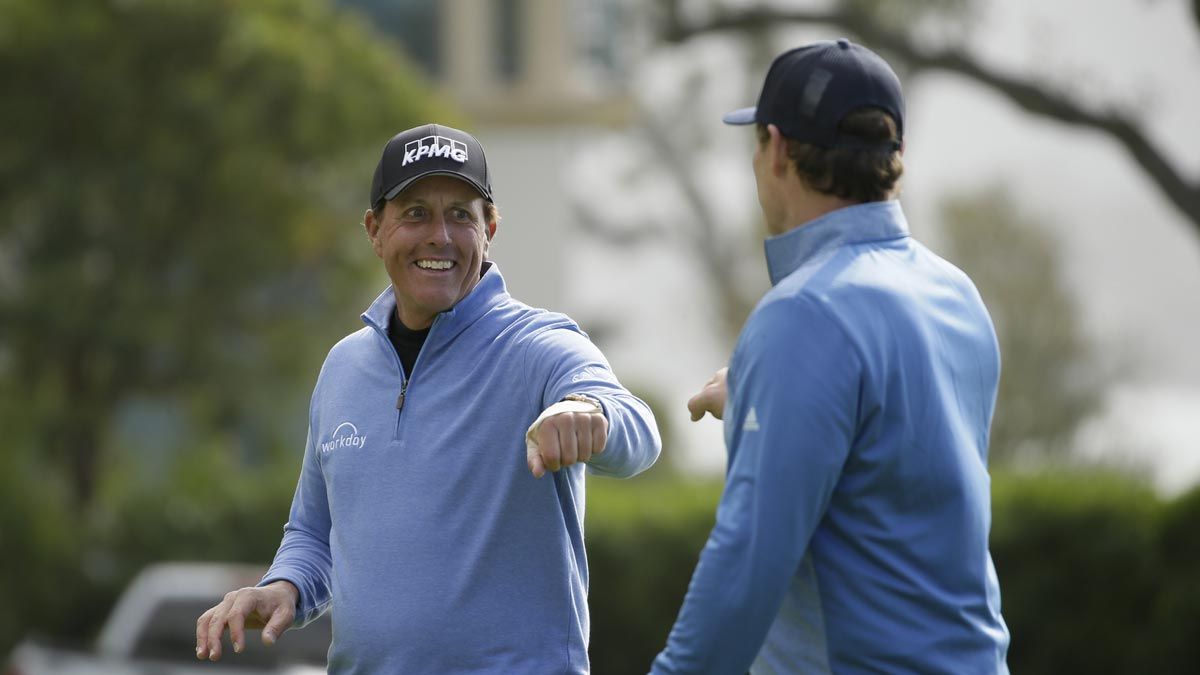 Mickelson and his sublime short game delivered more entertainment than all the athletes and celebrities combined during the Saturday show at Pebble.

In his post-round interview with CBS, he suggested hitting only nine greens wasn't all that bad because he kept missing in the right place that left him a good angle, the exception being the par-3 12th where he made his lone bogey. And then he abruptly ended the discourse.

"Actually, that's not true," Mickelson said. "I had some pretty good up-and-downs."

Topping the list was No. 7, the 110-yard hole down the hill toward the Pacific, the most picturesque hole at Pebble. It looked like a terror for Mickelson when his sand wedge went long and plugged into the back bunker.

"I was just trying to not make 5," Mickelson said. "I was trying to get on the green and just make a 4, give myself a putt at a par. But it came out great."

It splashed out of the sand so perfectly that it took a few hops in the rough before reaching the green, losing enough pace to trickle 2 feet away for a tap-in par. Even for Mickelson, it rates among his best.

"Yeah, it's No. 2 in my all-time greatest bunker shots," Mickelson said. "I made one in the final round at Memorial, Muirfield Village, the old 16th hole from under the lip, plugged, and I holed that one. This one didn't go in, but it was the second-best I've ever hit."

Taylor's best was a 3-wood onto the green at the par-5 seventh that led to eagle and assured he would have the lead. His only PGA Tour victory was just over five years ago at the Sanderson Farms Championship, his fourth start of his rookie season. He will be in the final group, his first time playing with Mickelson. 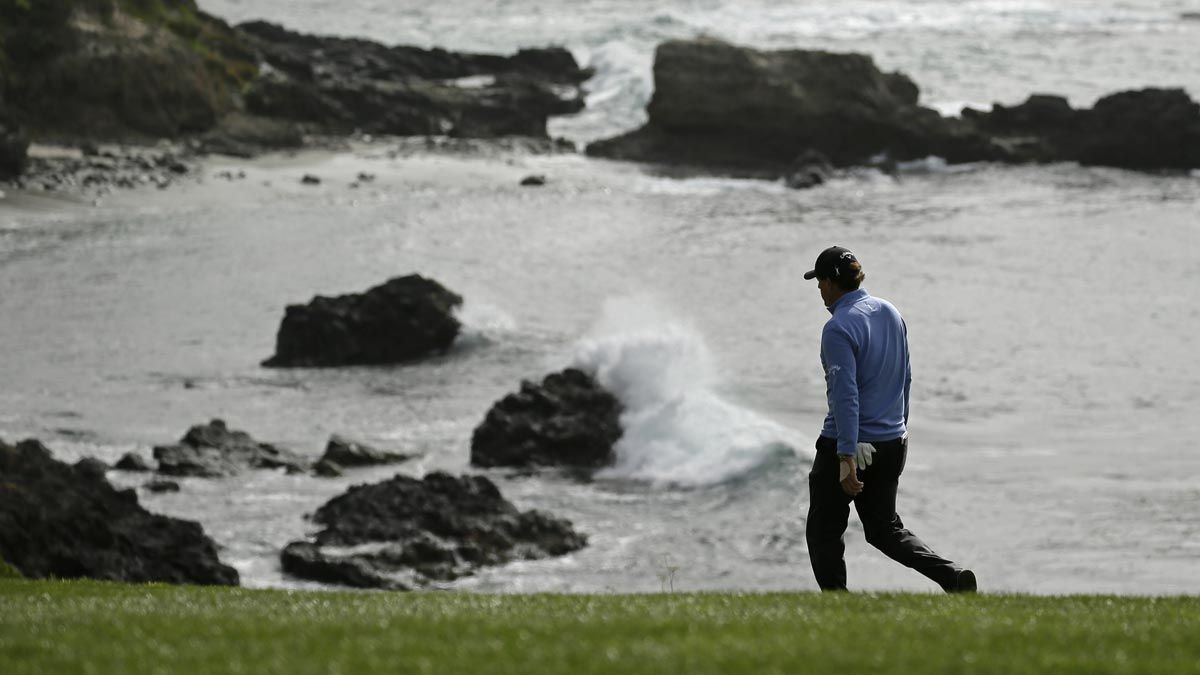 "It's going to be a new experience for that reason, if I am playing with him," Taylor said. "Obviously, if he makes a putt or great shot, the crowd's going to go wild. I've just got to do my own thing, try to block all that out. Easier said than done, without having to do it before, but I'll do the best I can."

This is a two-man show; however, Jason Day posted a 70 at Spyglass Hill and was only three shots behind at 14-under 201.

For others, it was a wasted opportunity.

Pebble Beach had more wind than earlier in the week, but still gentle enough that low scores were available. Dustin Johnson, a two-time winner at Pebble, was in striking range and could manage only a 72, leaving him eight shots back. Patrick Cantlay, at No. 8 in the world, played the final six holes in 2 over for a 72 and was nine shots back.

Mickelson started with a pair of birdies. He took a share of the lead with a birdie on the par-5 sixth.

And then the fun began.

After his par save at No. 7, his long bunker shot from short of the eighth green rolled inches from the cup.

More trouble supposedly awaited on the 13th when his approach peeled into the left bunker. He raised both arms when that dropped for birdie. And on the par-5 14th, he made a mistake by not hitting his punch wedge hard enough. It came down the slope, off the green and back into the fairway. Mickelson's long chip from 90 feet banged into the pin and dropped for birdie.

"It was a really good day in saving shots and hitting shots," Mickelson said, "but I'm usually OK with a wedge."

Next up is a Sunday with plenty at stake for the leading three players.

Mickelson said earlier in the week he would not accept a special exemption for the U.S. Open if he needed one. A victory at Pebble — the 45th of his career — would go a long way toward solving that, moving him to around No. 40.

Taylor can validate his first win since his rookie season, an opposite-field event at the time. The Canadian has never been to the Masters and has played in only four majors, two as an amateur.

Day, meanwhile, is a former No. 1 who spent most of last year injured and frustrated. He has gone nearly two years since his last win, and was in danger of falling out of the top 50 if he didn't starting getting better results.