KOREA’s Wook Gwon Min banked on a superb backside start while Lois Kaye Go sizzled on a frontside finish as they shot identical three-under 68s on Tuesday to take the early lead in the National Stroke Play Championship at Riviera’s Langer course in Silang, Cavite.

Wook thrived in the privacy of an early morning tee-off, birdying two of the last three then bucking a bogey on the second hole with birdies on Nos. 6 and 9 to gain a two-stroke lead over in-form Ryan Monsalve in men’s play of the 72-hole championship kicking off the 2020 PLDT Group Amateur National Golf Tour.

Monsalve, riding the momentum of a runaway triumph in the National Doubles with Lanz Uy two weeks ago, also tamed the tough backside of the par-71 layout with a 34 but missed forcing a tie with the Korean with a double bogey mishap on No. 7 for a 70.

Weiwei Gao shot a 73 for third, while Sean Ramos fought back from a frontside 39 with a closing 35 to save a 74 for joint fourth with Japan’s Kyosuke Yoshida.

Go kept her good run of form going coming off a SEA Games stint, anchoring her strong start on superb putting, her birdies on Nos. 6 and 7 netting her a 33-35 round that featured three other birdies against two bogeys at the back. She stood five shots clear of Samantha Martirez and two others in the women’s side.

“I feel really contented with my game and I thought I played pretty solid,” said Go, member of the Asian Games and SEAG gold medal winning teams. “I made a couple of mistakes but recovered well with birdies. The key to my game was putting. I made putts from 15 to 20 feet and was able to save par when I needed to.” 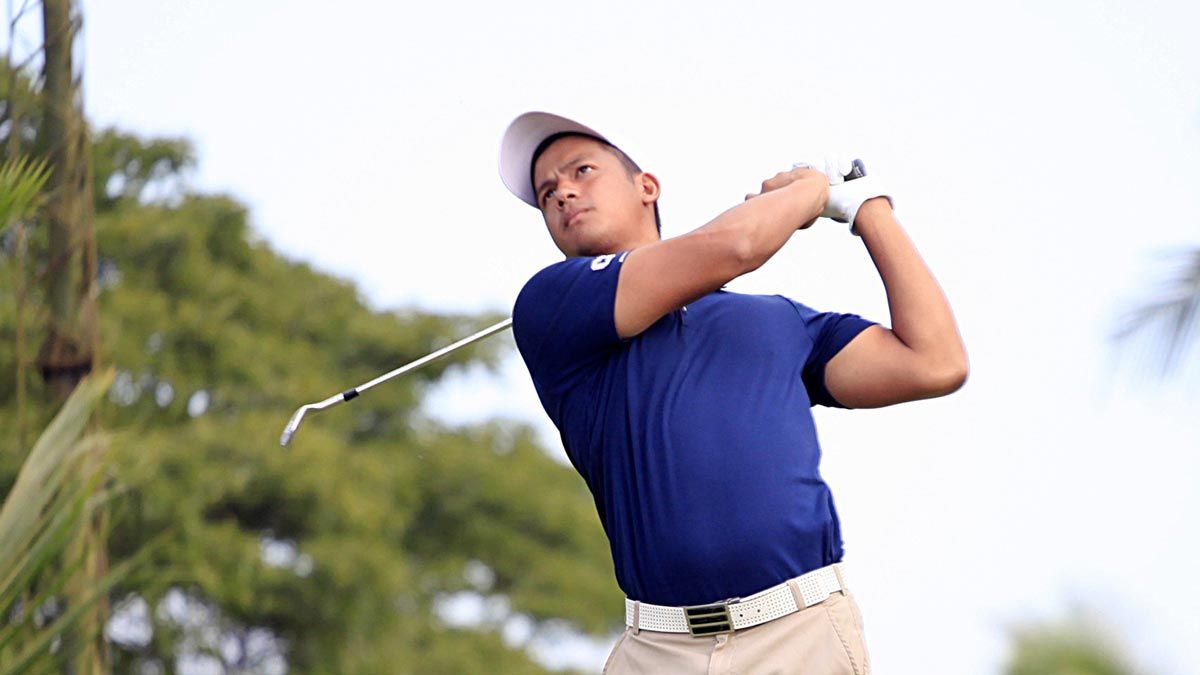 Martirez matched the Cebuana ace’s 35 start but dropped three strokes in the first three holes at the front, including a double-bogey on No. 2, finishing with a 38 for a 73 in a tie with Abby Arevalo, teammate of Pagdanganan and Go in the SEAG squad, who also stumbled with a closing 38, and young Rianne Malixi, who rallied with a 35.

Defending champion Gen Nagai groped with his short game and never recovered from a three-bogey, one double bogey card at the front, limping with a 77 to fall behind by nine.

Aidric Chan, spearhead of the bronze medal SEAG squad that included Ramos and Corpus, stayed in the early mix with a frontside 36. But last year’s Junior World titlist got undone by a quadruple bogey on the par-4 11th, ending up in joint 12th with Nagai, Miguel Ilas, Santino Laurel and Korea Hur Jun Ha.

In women’s side, Junia Gabasa, another talent from Cebu, carded a 74 for joint fifth with Laurea Duque while Bernice Ilas shot a 75 and Samantha Dizon and Korean Bang Hee Yeon shared eighth place with 77s with the rest of the 27-player field way behind with high scores in the event organized and conducted by the National Golf Association of the Philippines.