LLOYD Jefferson Go knows a thing or two about climbing out of a deep hole and moving to the top.

The young shotmaker from Cebu put together a steady finish to make up for a shaky start for the second straight day, this time doing even better as he vaulted all the way to a three-stroke lead in the second round of the 2014 Philippine Amateur Open Golf Championship on Tuesday at Wack Wack Golf and Country Club.

Already three over through two holes, the 18-year-old star of the Cebu Country Club showed enough patience to turn his game around and submit a second straight even-par 72.

That put him three strokes clear of defending champion Jerome Ng of Singapore, who had a 73 for a 147 total, and four shots ahead of overnight leader Jobim Carlos, who struggled to a 77 for a 148.

With his day looking gloomy under cloudy skies after a double bogey on the opening hole and a bogey on the next, Go’s plan was to simply play steady and not overdo things. 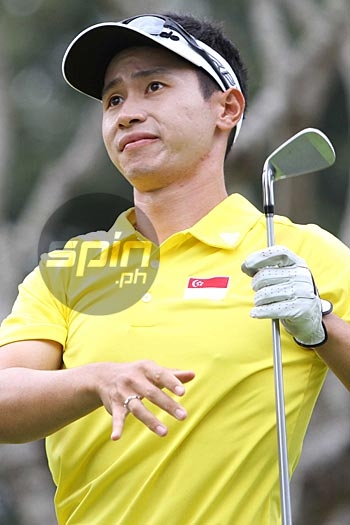 Then came the scoring chances.

A 10-footer for birdie on the short par-4 No. 7 got him back in scoring mode, a fine approach to two feet on No. 13 earned him the lead and a 40-foot birdie on the 15th enabled him to tighten his grip on the top spot. That was another fine recovery for Go, who also went two-over through four holes on opening day before steadying himself for an even par round.

Carlos relinquished the lead early with bogeys on Nos. 3 and 6, and he went on a steady decline with further dropped shots on 9 and 11 as he continued to struggle on the greens.

“Hindi maka-putt e,” a smiling Carlos said during a short break before the par-3 No. 16.

But Carlos, who plays in the NCAA for University of San Francisco, said four strokes isn’t too far behind with still 36 holes to be played.

While Carlos was slipping, Singapore’s Putra Cup star Ng made two front nine birdies that moved him to the lead at even par, but a bogey on No. 11 and a double bogey on the 13th pulled him back.

Abdul Hadi of Singapore had the day’s best 71 and jumped from joint 22nd to a share of sixth at 151 with Justin Quiban, who had a 74.

Johnson Poh was alone in eighth at 152 after carding a 78 and fellow Singaporean Marc Ong fired a 76 and was in ninth at 153.