UNHERALDED Filipino James Ryan Lam gunned down birdies and came up bogey-free with conservative play, firing a five-under 66 to grab a share of the lead with Australia’s Sam Brazel, while teen star Miguel Tabuena was just a stroke off after the opening round of the $300,000 Solaire Open at The Country Club.

Four-year pro Lam, still chasing a breakthrough victory, avoided trouble by playing more conservative tee shots and posted nines of 33-33 highlighted by a chip-in birdie from 40 feet on the par-4 No. 18.

“I used my 3-wood on most of the holes and only pulled out my driver on the holes that are really wide,” said the 26-year-old Lam, 34th on the Philippine Golf Tour money list last year. 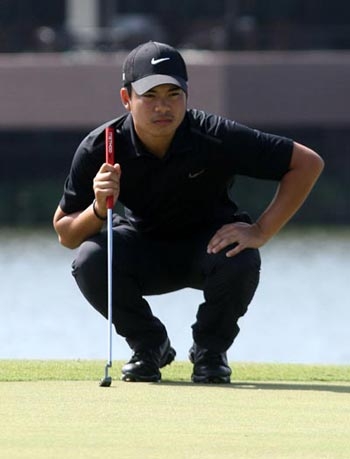 Brazel cashed in on an early tee-time to gun down four birdies on the front nine then added two more at the back when the wind started to pound the course and he failed to sustain his charge, dropping a shot on No. 16 for nines of 31-35.

“This is my first time here and I enjoy the layout,” said Brazel. “The wind is a bit tricky but I hole some nice putts which makes it a little bit easier. The wind was calm in the first few holes but kicked up on No. 4.”

“This is my best round here but I did prepare hard for this tournament, playing here almost daily the past three weeks. I’m glad my hard work is playing off,” said tabuena.

Tabuena took advantage of benign conditions early and shot four birdies against a bogey on his first nine.

“No. 4 is very tight with the hazard on the right and an OB on the left. But when I parred it despite playing against the wind, I gained the confidence to move on and play better,” said Tabuena.

Carl Santos-Ocampo bogeyed the closing hole and was at 69 in the company of South African Bryce Easton, Thai ace Prom Meesawat, Spain’s Carlos Pigem and Japan’s Akinori Tani, while 20 others carded 70s as 38 players out of the starting field of 150 broke par.

While some of the lesser lights played fine on opening day, several pre-tournament favorites faltered with two-time Asian Tour champion Thaworn Wiratchant fumbling with a 73 in a tie with Malaysian Nicholas Fung, Thai Chapchai Nirat and local bet Jay Bayron.

Cassius Casas, winner of The Country Club Invitational last month, blew a two-under card with a triple-bogey 7 on No. 4, limping with a 74 in the event sponsored by Solaire Resort and Casino and backed by DMCI Homes, BDO, PLDT and Meralco.