JUVIC Pagunsan fired a three-under 68 to take the first-round lead in the ICTSI Riviera Classic at the Langer course on Wednesday in Silang, Cavite.

A delicate 10-foot putt for birdie on the ninth capped Pagunsan’s pair of 34s at the softened par-71 layout.

“It’s tough playing in the wind and rain,” said Pagunsan, on course for a record fourth win-in-row after the sweeping the last three legs of the Visayan swing of the Philippine Golf Tour put up by ICTSI in Bacolod, Negros Occidental and Iloilo.

He added that this event could be his last on the local circuit this year as he sets to leave for Japan in two weeks time to resume his campaign, along with Que, on the region’s richest tour.

“I placed second five times since 2015 so I hope to finally score my maiden win (in Japan) this year,” said Pagunsan, who tamed the rain-soaked layout with five birdies against two bogeys.

Depilo birdied Nos. 15 and 16 to fire a 69 in preferred lies to match Zaragosa and Van der Valk.

Jay Bayron, winner at Riviera in 2016, is in joint fifth at 70 with Art Arbole and Japan’s Makoto Iwasaki.

“I was just lucky since it’s tough to score here with the rain and wind although the course is in good condition,” said Depilo, whose career best finish was seventh at Riviera last year. He made two other tap-in birdies that negated his two missed green bogeys. 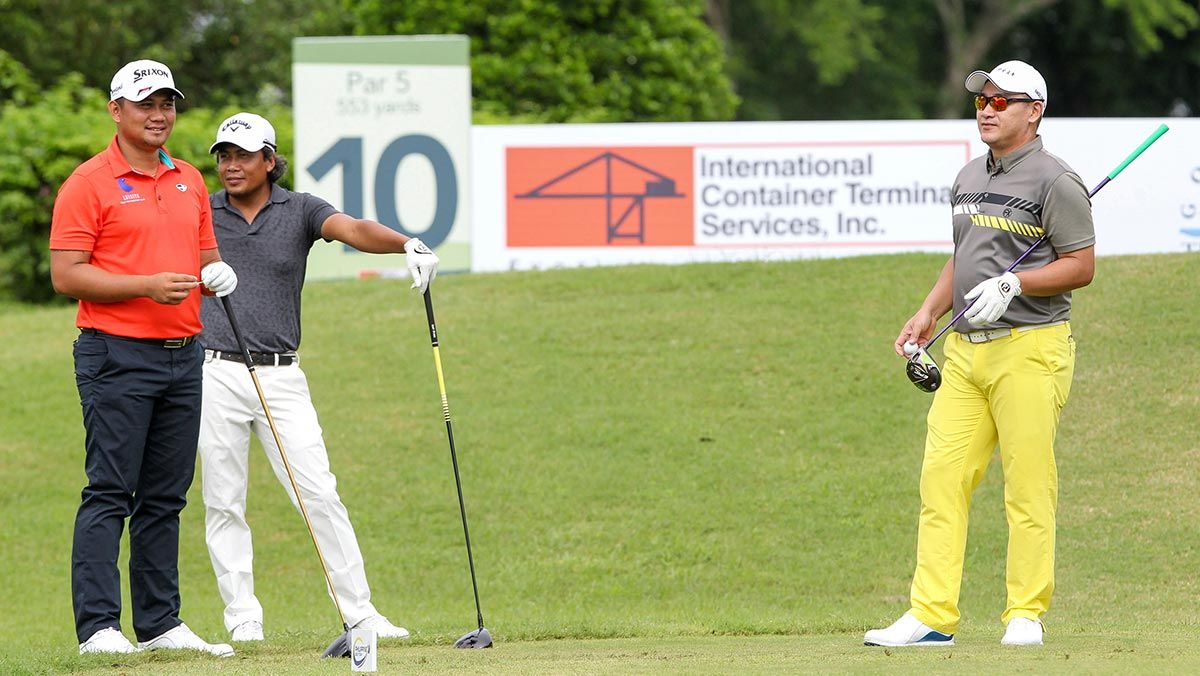 Van der Valk, who nailed his second PGT win in Cebu last June, opened with a bogey but managed to recover.

“Very good ball striking under difficult conditions. I also made some good putts and just one back off Juvic and that made me happy,” said Van der Valk. “It’s been raining hard in the area the past two weeks so I tried to hit it as hard as possible as there’s no roll. But I kind of hit some so hard that it went past the greens and that’s the only way to offset.

Zaragosa, many-time national amateur champion whose rookie season was marred by a string of missed cut stints, appeared headed to clinching the first day honors when he went four-under with three holes left at the front.

But he fell short of his approach shot from the rough on the par-4 No. 9, hit a bump-and-run 16 feet way past the cup and three-putted after his bogey bid lipped out that dropped him to joint second at 69 in the event backed by Custom Clubmakers, Meralco, Champion, Summit Mineral Water, K&G Golf Apparel, BDO, Sharp, KZG, PLDT and M.Y. Shokai Technology, Inc.

“It happens,” said the 21-year-old diminutive shotmaker of his mishap. “Part of the process and will just have to move on and hope for a better round tomorrow.”

Clyde Mondilla stumbled with four bogeys against two birdies and finished with an even par 71 in a tie with Reymon Jaraula and Arnold Villacencio in the P2.5 million event organized by Pilipinas Golf Tournaments, Inc.