JOBIM Carlos never let up and romped with a solid six-under 66 to all but retain the men’s crown while Harmie Constantino slowed down with a 71 but still pulled away by eight in women’s play in the third round of the Philippine Amateur Stroke Play Open Golf Championship on Thursday at the Eagle Ridge Golf and Country Club in General Trias, Cavite.

The pro-bound Carlos, six shots clear at the start of the round, ended the day 10 strokes ahead at nine-under 207.

He gunned down five birdies on the front nine before settling for one birdie in the last nine holes he highlighted with a couple of scrambling pars. 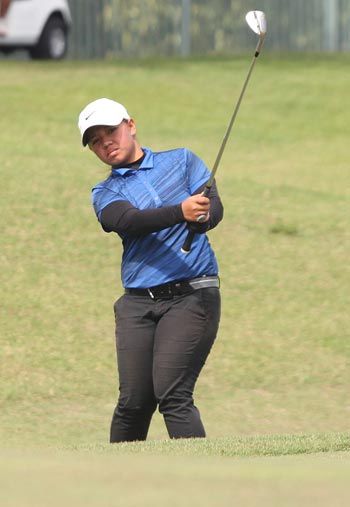 Carlo Villaroman and Aidric Chan are 18 strokes behind at 225 after shootings 72s.

Despite his huge lead, Carlos, who also won the NGAP National Doubles title with Inigo Raymundo last week, is not in the mood to celebrate, yet.

“It will still depend on how I would start the final round. But I need to remain focused although I think I have to play a conservative game and just keep the ball in play,” said Carlos, set to join the new season of the ICTSI Philippine Golf Tour next month.

“I didn’t hit the fairways and greens that much. But I’m comfortable with my lead now, unless I play horrible in the final round,” said Constantino, who missed six fairways and eight greens but still came through with four birdies, including tap-ins on Nos. 6 and 12, against bogeys on Nos. 4, 8 and 10.

Hwang Min Jeong, another Korean bet who won a ladies pro tournament last year, matched par 72 for a 220, while Malaysia’s Nur Durriyah Damian shot a 75 for a 223.

Rupert Zaragosa, tipped to slug it out with Carlos for the crown, shot himself in the foot with a 77 and tumbled to ninth at 228 behind Korean Jang Yu Bin (77), Weiwei Gao (77) and Ira Alido (79), who all pooled 226s in the event kicking off the 2016 PLDT Group National Amateur Golf Tour, organized and conducted by the National Golf Association of the Philippines, and sponsored by the MVP Sports Foundation, Smart, PLDT and Metro Pacific Investment Corp.