FORT WORTH, Texas — Harold Varner III took his place in history in the PGA Tour's technology era, all because of a triple bogey.

Jordan Spieth had his lowest 36-hole score in four years. Rory McIlroy shot 63 with a bogey on his last hole. The strongest field of the year in golf's return to competition produced an All-Star leaderboard at the Charles Schwab Challenge.

No wonder a spectator tried to sneak into Colonial on Friday (Saturday, Manila time). There was plenty to see.

The man didn't get too see much before course officials noticed someone looking out of place with so few people in the first place. He wore jogging shorts, a black T-shirt and no credentials. He was sent packing.

"Watching from afar, this is a golf course that's always let the best players rise to the top," said McIlroy, two shots behind Varner going into the weekend. "You have to be in complete control of your game, hit fairways, hit greens, convert some putts. Yeah, the leaderboard is a 'Who's Who' of golf right now. I'm just happy to be in the mix." 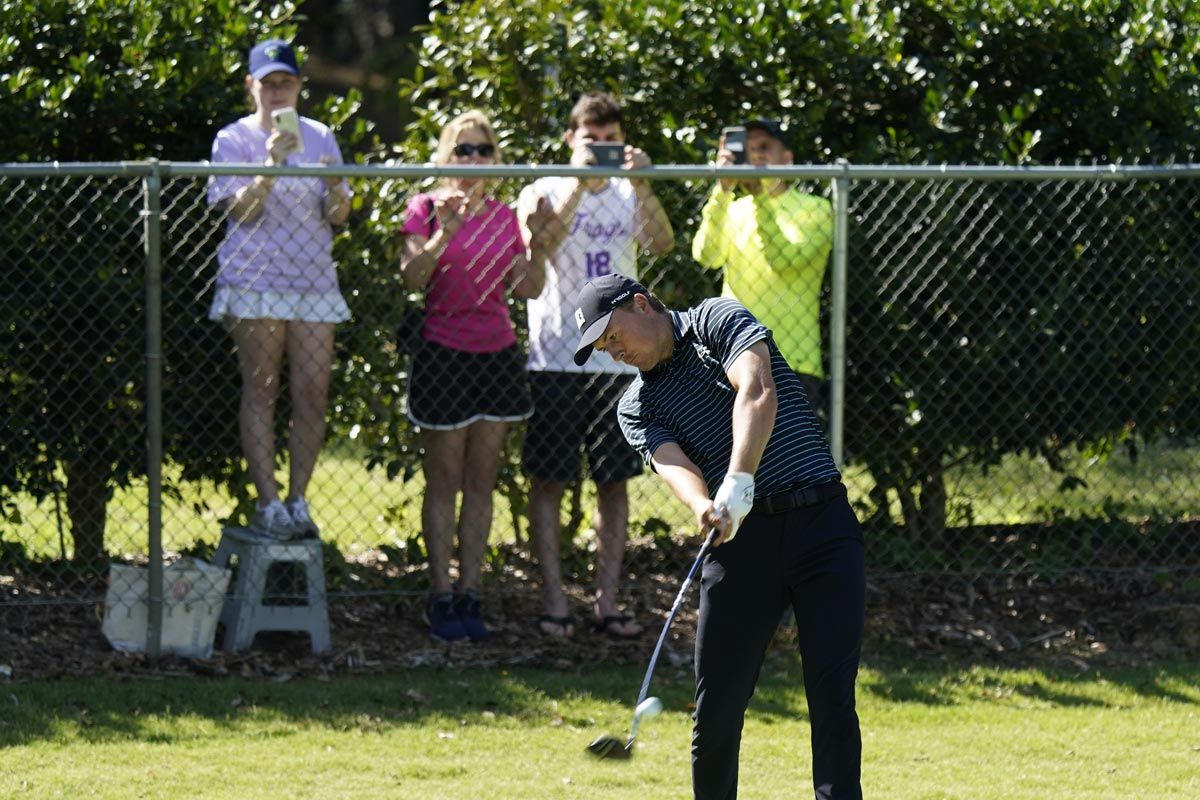 Fans watch from behind a fence as Jordan Spieth tees off on the second hole at Colonial Country Club.

If the opening round of the Charles Schwab Challenge felt like the first day of school, players quickly adjusted to the quiet environment as the PGA Tour tries to restart from the COVID-19 pandemic.

It's still not a return to normal. Some of the 81 players who missed the cut and are on the charter to Hilton Head will have to stick around for the flight. Everyone on the flight will be tested for the coronavirus Saturday.

And there are still no spectators, making Colonial sound more like a library. And while players are getting accustomed to birdies and eagles greeted with silence, it figures to take on another dimension as the stakes get higher.

"It's tough to get adrenaline going," US Open champion Gary Woodland said after a 67 left him three shots behind. "I think you can get a little bit more of that this weekend getting in the hunt and get those juices flowing, but it is different without a crowd. You've got to kind of get that adrenaline going yourself."

Varner had plenty of juices flowing after his first tee shot on No. 10 went onto a bridge, led to a one-shot penalty, and eventually a triple bogey that quickly knocked him out of a share of the lead. No worries. He answered with eight birdies and a place in the record book with a 66.

Dating to the ShotLink era in 2003, it was the lowest score on the PGA Tour by a player who began his round with a triple bogey. He was at 11-under 129, the lowest 36-hole score of his career.

"Not the start I wanted, but it's just a part of golf," Varner said. "If I would have tripled the last, it would have added up to the same. It's a great opportunity going into the weekend."

One of four PGA Tour players of black heritage, Varner was in the gym Thursday during the moment of silence, which the tour is doing every day at 8:46 a.m. as a tribute to George Floyd and a time of reflection over racial injustice and civil unrest. This time he had a 10-foot birdie chance on the par-3 16th when he heard the three short blasts from the horn to stop play.

"I just wanted to make that putt just to get me back to even (for the round)," Varner said. "I was really just focused on playing some good golf. It's pretty cool that the tour is doing that, but when you're out there, you're just so in the moment. Well, I was, anyway. I don't know, man, I was just trying to make a birdie." 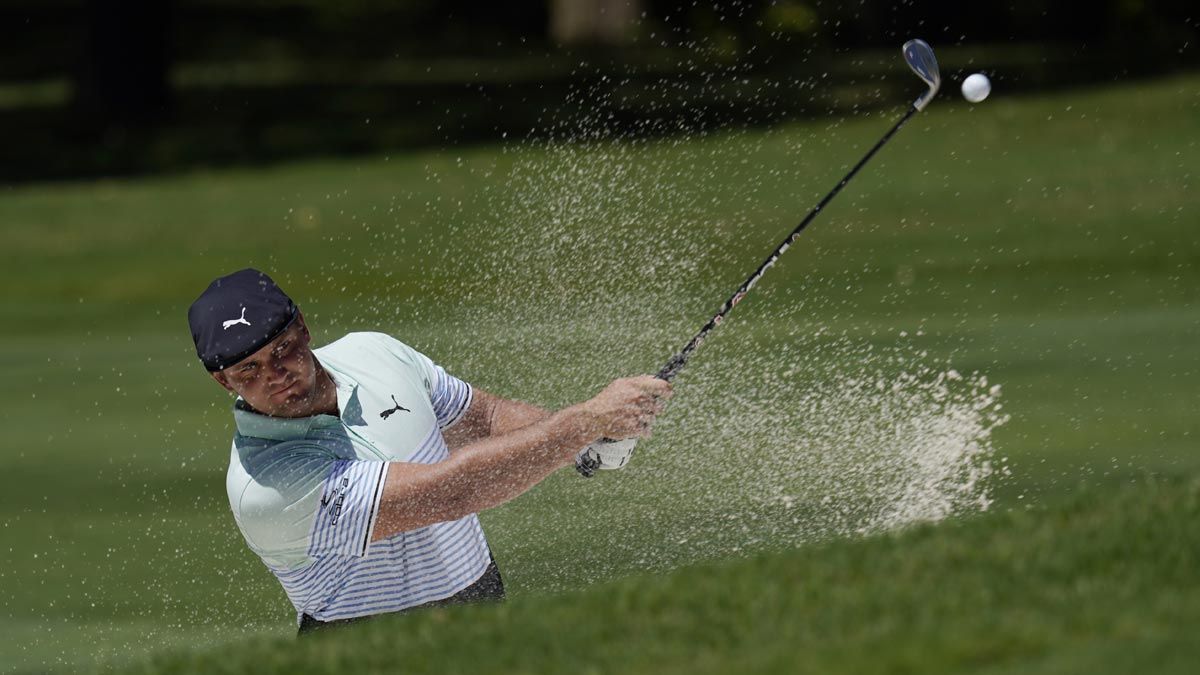 He led by one over Spieth, who shot 65 despite a four-putt double bogey from 30 feet, and Bryson DeChambeau, who played bogey-free for his 65.

Collin Morikawa Morikawa (67) and Xander Schauffele (66) joined McIlroy at 9-under 131, with Justin Thomas (68) and Justin Rose (69) among those another shot back.

Birdies were not in short supply on another day filled with hot sunshine, but not spectators.

Police say one man crossed a pedestrian bridge near the perimeter of Colonial, got through the fence near bushes in a corner of the course beyond the fourth green and watched some golf. A dozen or so others peeked through hedges and the fence along the front nine. Two corporate tents in houses lining the streets on the back nine were filled.

That's the extent of the noise.

"I wish there was some fans tomorrow," Varner said. "When it comes to being around the guys, it's very normal, but when it comes to fans and spectators, it's not normal at all."

If golf felt like it was slowly getting back to normal, the same could be said for Spieth, winless since the 2017 British Open.

More than just the putts he was making, it was the fairways Spieth kept hitting, along with one exquisite chip that led to a 65 and contention going into the weekend. The only blunder was taking three putts from 3 feet that led to double bogey.

"I felt like I gave myself some grace to say, 'Look, I haven't really been practicing a ton of those kind of short-range putts,'" Spieth said. "Those are the ones where you just have a ton of them when you're playing in competition, but you're picking them up a lot of times when you're playing regular rounds of golf at home."

His spirits were high, as were so many others who have taken advantage of good scoring weather and simply being back to work no matter how different it is with testing, thermal readings and no one around them.

"It felt as normal as it can, I guess," McIlroy said.