COLUMN: Killing an ant with a hammer

YOU know the line “You can’t fight City Hall?”

That seems to be an appropriate line to remember right now at the Philippine Golf Tour. After pushing through with its first tournament last week, next week’s tournament has been cancelled. And it all began when a handful of pros complained about the distribution of the prize money.

The tour’s sponsor, the International Container Terminal Services Inc., aka ICTSI, is owned by Forbes-listed billionaire Enrique Razon Jr., and it looks like he did not take the complaint lightly. He may have even taken it as an insult.

The cancellation has caught many pros by surprise. They had gone home in high spirits last Sunday after the first of two tournaments scheduled for this month was completed, lifted by the pleasure of hitting the greens again, and energized by the thought that their livelihood was back.

Covid-19 whacked their profession last year, and only the generosity of ICTSI salvaged what could have been a totally disastrous 2020. It sponsored a Tour which put up a few tournaments in the latter part of the year and, in between, the Tour provided financial help to pros hit hard by the pandemic restrictions. For many months, golf — and for that matter, most other sports — was shut down and athletes were left to rely on their savings.

This year, ICTSI again came to the golfers’ rescue. After surveying conditions and concluding it was safe enough to send the pros back to the fairways, two events were scheduled for March, with other events set for the next months, to be held under tight health protocols which included living under a bubble: hotel-to-golf course-then-back. No side trips, no home visits. This required more expense on the organizers’ part, but the event was a go.

The pros gladly accepted the stringent protocols. What was important was that the Tour was back! Many players came out of hibernation, including one-time golf superstar Frankie Miñoza who was lured from retirement to play at the Eagle Ridge Challenge, the first of two tournaments.

Then just as the golfers were settling into what they saw as a bright new beginning, the shocking news came.

Turned out that a few players had questioned the distribution of the prize money. What was listed as their winnings was not what it was when they received it. According to sources, about five players decided to complain, and sent their misgivings via text to the organizers. The deductions reportedly came in the form of taxes and other fees which the players thought depleted their take-home money.

It’s said that the organizers never responded to the text. But their immediate move said it all: the next tournament was totally cancelled. The move was swift and brutal. It spelled in no uncertain terms who was boss.

Majority of the players were stunned by the turn of events. Antonio Lascuna, a veteran internationalist, was surprised, saying he did not know that some players complained. Many others, who did not wish to be identified, also expressed surprise.

Other players tried to save the situation. They immediately wrote to Razon, expressed their gratitude for having the Tour, and appealed to the billionaire businessman to reconsider. At this writing, not a pip has come from the ICTSI side.

A number of netizens began blaming the pros, calling them “ingrates.” Other kibitzers said that if players wanted to win the big prize, they should go improve their skills.

The tournament, officially known as the Eagle Ridge Challenge, offered a winner’s prize of P360,000 from a pot of P2 million. Miguel Tabuena, one of the country’s top golfers, won the event. 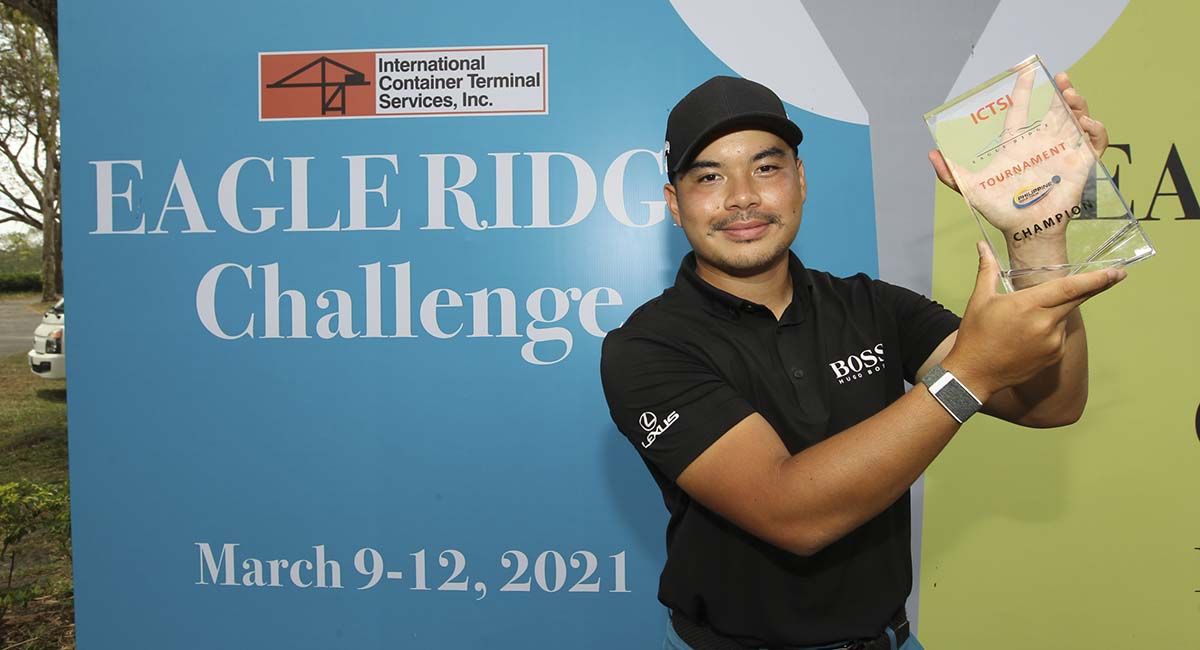 The ICTSI has long been the lifeblood of Philippine golf, and its owner Razon, 61, is widely known as the sport’s godfather. Although golf is no doubt a rich man’s sport (Manila Golf Club membership, for example, costs P85 million), only Razon, among those who belong to the rarefied list of billionaires, has supported golf consistently, giving away millions for its development.

His foundation has for nearly two decades funded youth golf programs for boys and girls. It has hired full-time coaches and supported national teams. And when talents blossom and junior golfers shine, or even when they turn professional and travel the world, ICTSI was there ready for its support.

Razon also brought in world-class talent to play in various local tournaments. It’s safe to say that without him, the Philippine Open, the country’s flagship event, would have gone under a long time ago.

More than an average golfer himself, he once invited retired former world number one Lorena Ochoa of Mexico to give a golf clinic to young golfers and reportedly to play a round with her at The Country Club, an exclusive course in Laguna (membership: P5.5 million) which Razon built to world-class specs.

He also sponsors talents overseas, among them South Korea’s Jin Young Ko, currently the world number one, and Sung Hyun Park, former world number one, whom he also invited to play in an 18-hole tournament here less than two years ago. Ko’s and Park’s golf caps carry the logo of Solaire, a casino owned by Razon. The country’s top two women golfers — Yuka Saso and Bianca Pagdanganan — are also under ICTSI’s wings.

So this is the man whose feelings some local golf pros might have inadvertently hurt, the man without whose support Philippine golf would have followed the same path as baseball, swimming, and other sports which have drifted into a twilight zone.

Very few golfers have ever hobnobbed with Razon. Unlike say, fellow billionaires Ramon Ang and Manuel V. Pangilinan, owners of three PBA teams each who regularly break bread with their top stars. Razon rarely connects with local golfers, although a few stars of the fairways, like Tabuena, Angelo Que, Miñoza, get an occasional audience.

He routinely ignores appearances in events ICTSI bankrolls, and seldom, if ever, hands out championship trophies, unlike other sponsors whose chief executives and owners sometimes turn these occasions into venues for self promotion.

[See These PBA players are good at golf. But this guy is the best]

But, another side of Razon is now emerging. Turns out, he does not take kindly to even the smallest slight. He is not one for welcoming criticism or question in the conduct of his enterprises. It’s his way — or be gone.

Unfortunately, this fight is one-sided. Razon is estimated by Forbes to be worth $5.1 billion (About 255 billion in Philippine pesos). He was, in 2020, the third richest Filipino and the 565th richest man in the world. His anger right now is directed at persons in the bottom rung of the golf food chain.

Why Razon would use his immense wealth to teach a few possibly tactless people a lesson is a wonder to us. It’s like taking a hammer to kill an ant. Maybe it hurt him horribly that people forgot how much he’d done to improve their lives? Maybe Razon was big on getting courtesy and respect?

We are certain our local pros have learned their lesson with this one. Now they know that some benefactors are not going to be altruistic all of the time, and that those on the receiving end of their largesse are expected to keep their sentiments to themselves. The other side of this is that benefactors ought to remember that there is such a thing as noblesse oblige. You’re richer, you’re more powerful, you’re bigger — you ought to be the bigger man.