Constantino, Ikeda, Ababa tied for lead after one round at Eagle Ridge

HARMIE Constantino and Chihiro Ikeda holed out with birdies on opposite nines as they saved one-under par 71s and forced a three-way tie for the lead with Sarah Ababa after 18 holes of the ICTSI Eagle Ridge at Aoki Invitational on Tiesday in Gen.Trias, Cavite.

As fancied Chanelle Avaricio struggled, Constantino bounced back from back-to-back bogeys from No. 14 with two birdies in the last three holes for a 35-36.

Ikeda, in a separate flight, birdied the ninth on her way home to turn in her own version of a 35-36 round marked by an eagle on the par-5 No. 16.

Ababa, joint second with Ikeda at Splendido Taal last month, appeared headed to wresting solo control with a three-birdie, one-bogey card after 15 holes from the back.

But the shotmaker from a clan of top golfers in the south missed the eighth green and failed to return a six-footer for par, leading to a 36-35 and enabling Constantino and Ikeda to make it a three-way fight in the early going of the 54-hole championship which doubled its prize fund to P1.5 million.

They opened were two strokes ahead of amateur Mikha Fortuna and Apple Fudolin. Korea’s Juyoung Yang had four bogeys in the last 10 as she limped with a 75.

Pamela Mariano, Lovelynn Guioguio and Marvi Monsalve shot 76s while Avaricio failed to recover from a four-bogey skid from No. 11 and wound up with a 77 for joint 10th with Martina Miñoza in a disappointing start for a player who won three of the last five legs of the country’s premier ladies circuit. 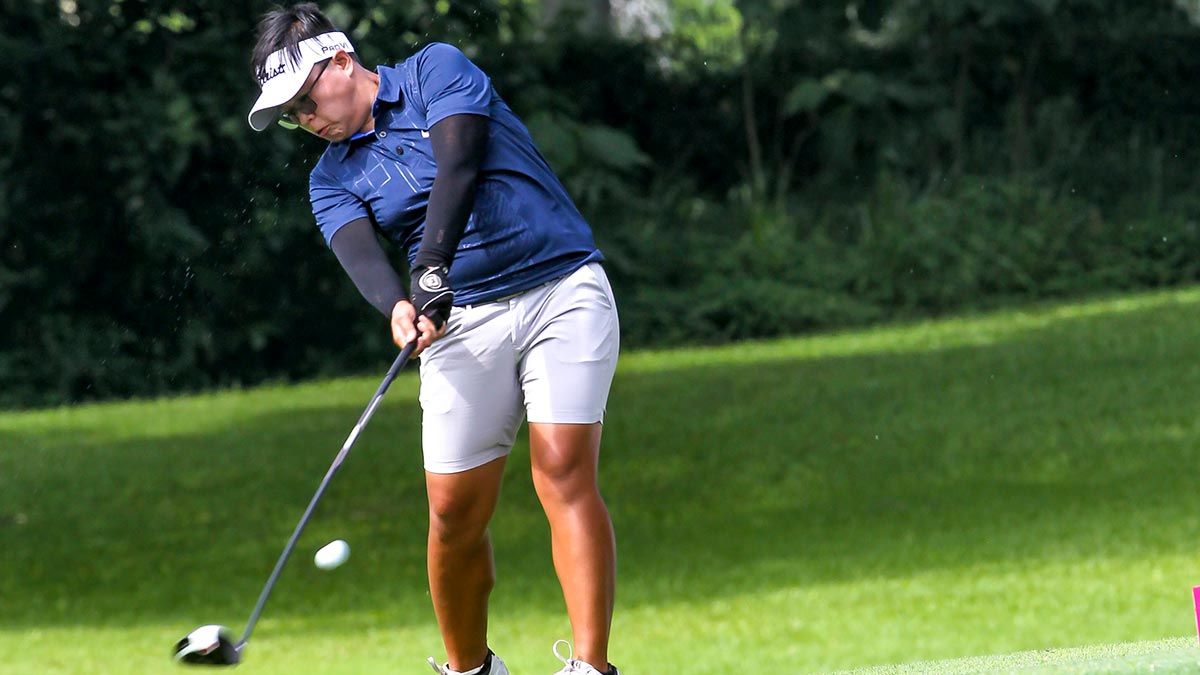 “I played good but I hope to play more consistent in the next two rounds,” said Ababa. “I had many (birdie) chances but my speed and allowance just wouldn’t match.”

Teeing off at the back, Ikeda, winner at Mt. Malarayat in May, struck back from a missed green bogey on No. 13 and a three-putt mishap on the 15th with an eagle on No. 16. The Manila Southwoods and AsiaGlobal Technologies-backed ace then mixed two birdies with two bogeys in the first four holes at the front before drilling in a birdie on the last to get a shared view of the top.

“I hope to play better tomorrow, especially on the birdie holes,” said Ikeda, referring to a couple of par-5s of the Aoki layout.

Constantino, seeking to extend her run of good luck here where she nailed her first two wins in her rookie season last year, rued her missed chances on Nos. 14 and 15 that stymied her bid to take command.

“My chip shots were pretty close but missed the putts,” said Constantino, who, however, more than made up for those misses with birdies on Nos. 16 and 18 that set in motion her drive for a third championship.