Mondilla outduels Lascuna at end of five-man playoff at Pradera

CLYDE Mondilla beat Tony Lascuña with a birdie at the end of an unprecedented five-man playoff to rule the hotly contested ICTSI Pradera Verde Classic in a rain-drenched final round in Lubao, Pampanga on Friday.

Mondilla and Lascuna were among five players who finished regulation at four-under 284, setting the stage for the most crowded playoff cast ever in the three-year history of the PGTA and the decade-long run of the PGT circuit.

Halfway joint pacesetter Joe Knox of England, third round co-leader Toru Nakajima of Japan and Filipino Rupert Zaragosa dropped out of the playoff when their birdie tries on the par-5 ninth missed in the midst of a downpour.

Knox, who blew a three-stroke lead in the stretch and wound up with a 71, dumped his third shot into the frontside bunker and blasted past the hole; Zaragosa, who joined the playoff after four straight 71, mised from the fringe while Nakajima, who stormed ahead with Spain’s Marcos Pastor with a solid 67 on Thursday, missed an eight-footer after Mondilla buried his from 12 feet.

That left Mondilla to battle Lascuña, who hit a solid approach to tap-in range for birdie.

A confident Mondilla proved steadier in the end, rolling in a pressure-packed putt from 10 feet then watching Lascuña flub his own bid from eight feet to claim his second PGTA championship worth $17,500.

“I knew I have the edge on No. 9,” said the power-hitting Mondilla of the 600-yard hole, which he also birdied in regulation after missing an eagle try from 15 feet. “I was actually a bit confident in the playoff.” 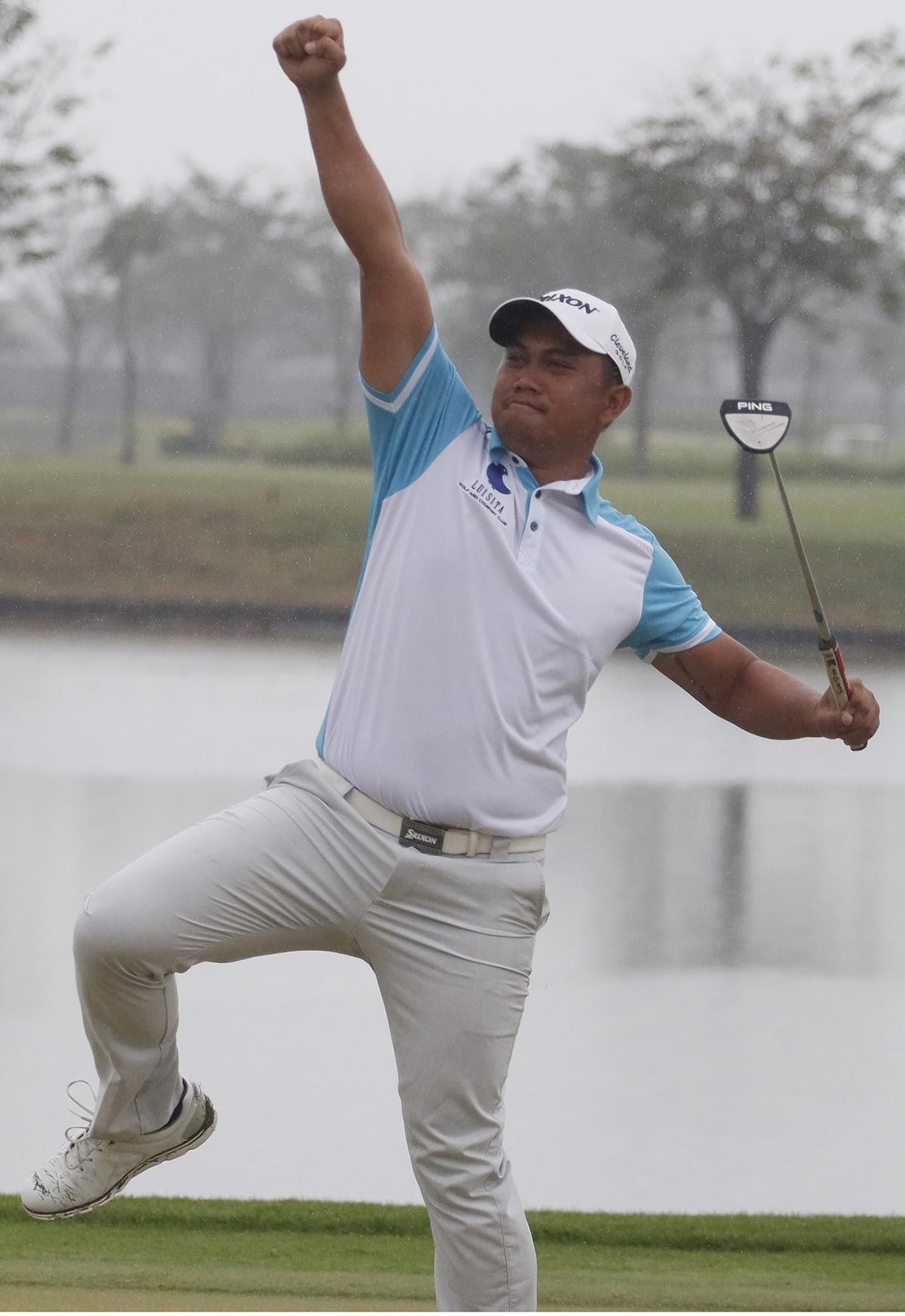 The victory capped an astounding comeback for the Del Monte star who has now won three and lost one in playoff matches.

The 2017 winner of PGTA’s Riviera Classic and reigning PGTA Order of Merit champion rallied from five down in joint 13th after 54 holes and snatched the win that was more of a triumph of the spirit for a player whose game went on a downswing after ruling the wild Philippine Open at The Country Club last year.

ILascuña had looked forward to formalizing his claim to the PGTA Order of Merit diadem but missed a potential clincher in regulation when his downhill, side-hiller putt on the 18th went past the cup.

Mondilla, who headed straight to the airport to catch his late flight back home to Del Monte, bogeyed No. 2 to reel further back. But he birdied the next then gunned down birdies on Nos. 5, 9, 12, 13 and 17 to fire a 67, the best in another unpredictable day.

Lascuna, just a stroke of third round co-leaders Nakajima and Pastor, also fell further behind with two bogeys in the first three holes. But like Mondilla, he struck back with three birdies in the last nine to save a 71.

Nakajima also dropped off the leaderboard with a rollercoaster two-birdie, three-bogey round after 16 holes. But the 35-year-old one-time PGT leg winner at Wack Wack birdied the tough par-4 17th to salvage a 72.

Zaragosa proved to be the event’s biggest surprise as the rookie pro, a shade under five feet, stood tall with a big fightback from a two-over card, birdying three of the last 11 to turn in his fourth straight 71.