NEWTOWN SQUARE, Pennsylvania — Sei Young Kim lined up for the putt on the 18th hole that would seal her first LPGA major championship and somehow missed by inches. One member of the gallery — in this instance, roughly 75 officials, photographers and course stragglers — even said "she made it."

The 27-year-old South Korean laughed off the rare misstep, tapped in the winner and shed the unwelcome label of winningest golfer on the tour without a major. Kim raised her arms "Rocky" style, hugged her caddie and, at last, was a major champion.

Kim chewed up Aronimink Golf Club in record style, shooting a 7-under 63 on Sunday to win the KPMG Women's PGA Championship. She was five strokes better than runner-up Inbee Park, never seriously challenged on the arduous course in suburban Philadelphia. 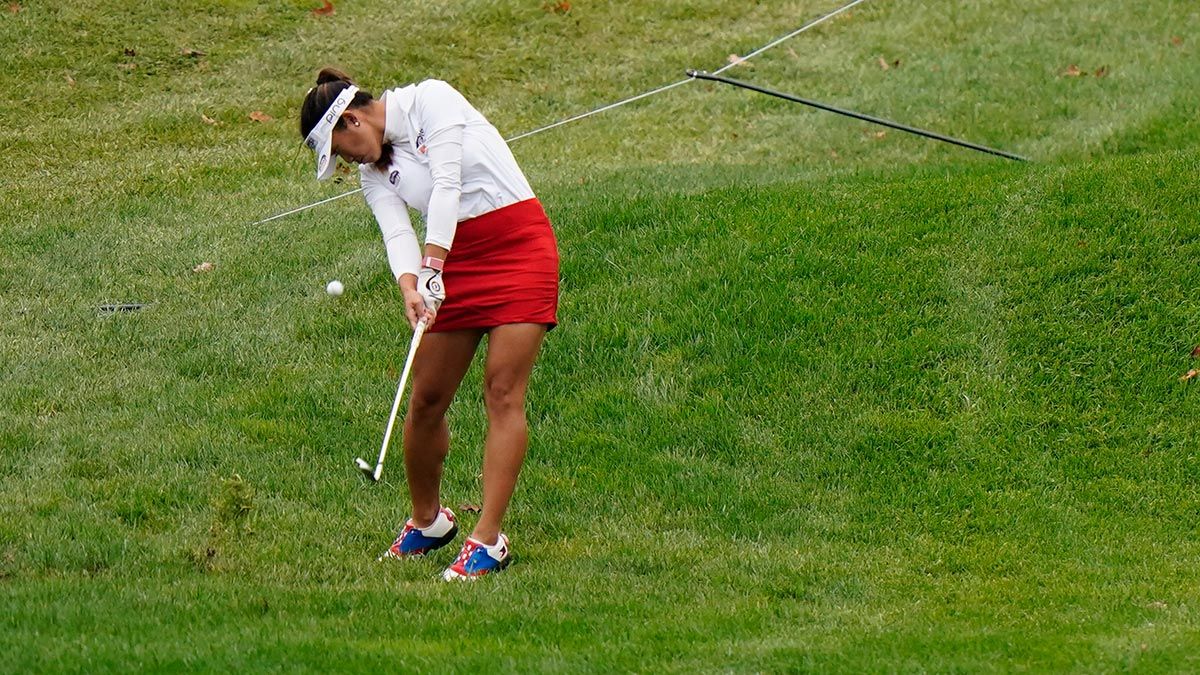 Bianca Pagdanganan closed with a 73, finishing in joint ninth.

The 22-year-old Filipina, four shots off the pace after 54 holes, could not find the stroke that got her two consecutive bogey-free rounds, making her only birdie of the finale on No. 18.

Still, with earlier rounds of 77-65-65, Pagdanganan wound up with a top 10 finish in her first major appearance.

Pagdanganan had an even 280 total, same as Americans Lauren Stephenson (68) and Brittany Lincicome (69), and Mexico’s Gaby Lopez (72). 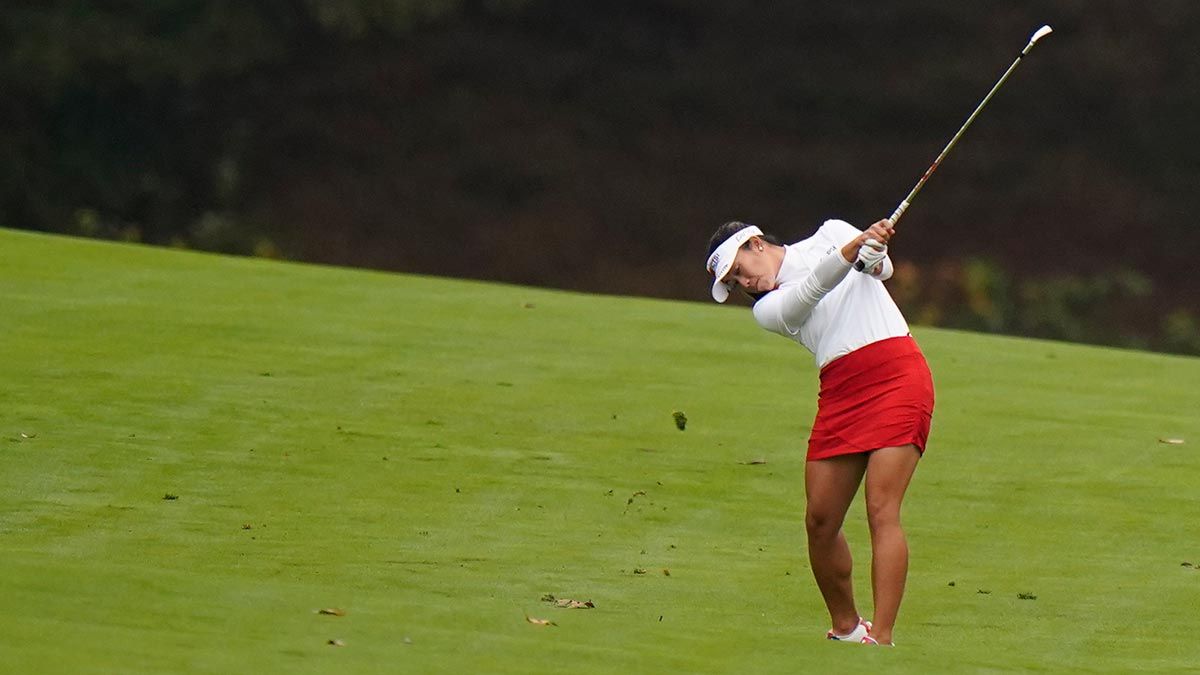 "I'm actually really hiding my tears at the moment," she said, standing next to the trophy.

Her dominance was in plain sight. She finished at 14-under 266. Her final-round 63 tied a tournament record, and her 266 set the championship scoring record.

Kim, who earned her 11th LPGA victory, got the championship push rolling when she matched a tournament record with a 29 on the front nine on Friday. She never really slowed down.

About the only surprise Sunday came when her father appeared on a video chat toward the end of her press conference.

"See you soon," Kim said with a smile and a wave.

She was, Park said, "really untouchable." 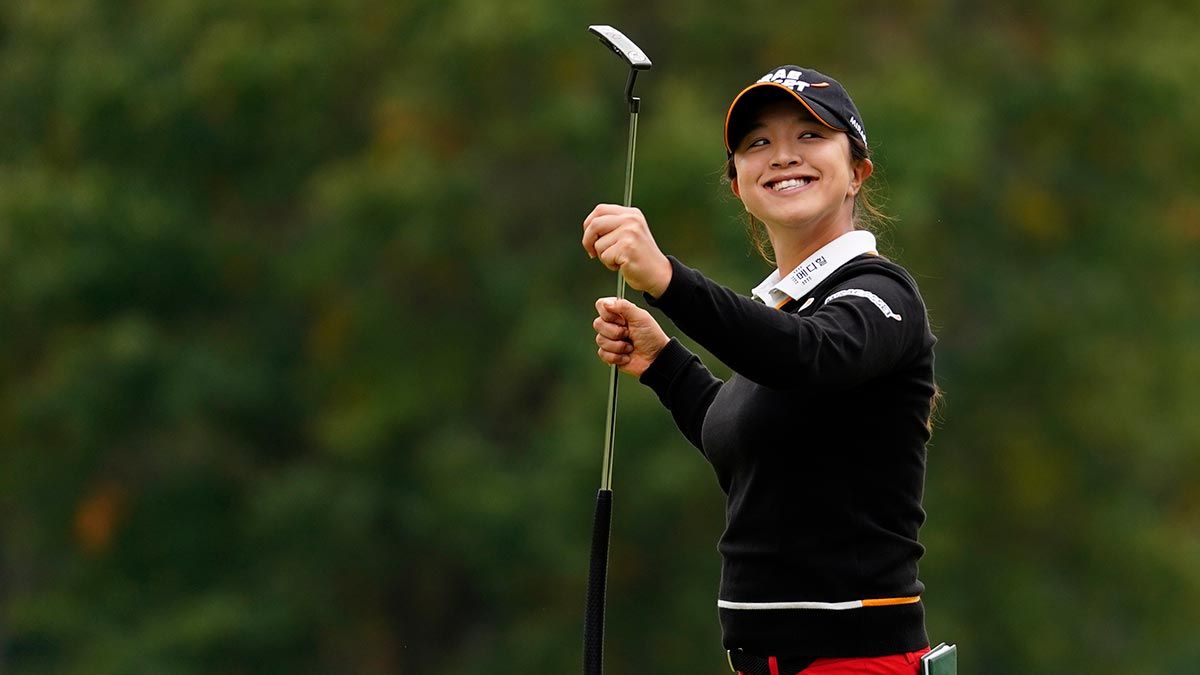 Park, a three-time winner of this championship, shot a 5-under 65. Park won the Women's PGA Championship in 2015 and Kim was in the first group of people on the course to celebrate with her.

Five years later, it was Kim's time to hoist the trophy.

Kim, a 2016 Olympian, was runner-up at the 2015 Women's PGA Championship and tied for second at the Evian Championship in 2018. Kim held the 54-hole lead at a major once, at the 2015 ANA Inspiration, where she finished in a tie for fourth.

She clinched the championship with a round to remember at Aronimink. Kim's fifth birdie of the day at the par-3 14th gave her a four-shot lead over Park and put her at 12 under for the championship.

"It was just so hard to believe that she never won a major before because it felt like she won a few," Park said.

Nasa Hataoka and Carlota Ciganda tied for third at 7 under. Anna Nordqvist (4 under) and Brooke Henderson (3 under) both played in Kim's group and finished fifth and sixth.

Kim is the latest addition to a growing list of first-time major winners in recent years, a sign of growing parity. Her victory means nine of the last 10 major champions had never won one before. She joins Sophia Popov (Women's British Open) and Mirim Lee (ANA Inspiration) as this year's major champions.

Kim dazzled at another event without the roar of the galleries -- though Toronto Raptors star Kyle Lowry walked the course -- and held off a hard-charging Park. Park had three birdies on the front nine as she tried to match Mickey Wright with a record fourth win at the Women's PGA Championship.

"I thought 65 will definitely do it," Park said. "I was thinking maybe like 5 to 6 under is a good number to kind of post and just see what happens. But obviously Sei Young was just much better than anyone else out there today."

As she approached 18, the trophy sitting out near the hole for her to see, pretty much everyone out at Aronimink lined the ropes. She got a big ovation after her tap-in sealed the win.

Kim waved to the crowd and was doused in champagne as she walked off the course.

With Paul Fusco on the bag, Kim matched a tournament record with a 29 on the front nine on Friday and shot a 32 for the front nine on Sunday. Fusco kept it loose, even walking over to compliment a reporter for a story ("really cool") before Kim teed off on No. 8.

"Before I came to the U.S., I actually saw Paul, and I saw how he prepared for each tournament, and I told myself I want to have him on my bag," Kim said.

Kim hit the putt of her life last November at Tiburon Golf Club, a 25-foot birdie on the final hole of the CME Group Tour Championship to win $1.5 million, the richest prize in the history of women's golf.

The money is far less at Aronimink — but the prestige of winning a major means so much more.

"I won't lie, I did feel the pressure starting last night," Kim said. "I actually arrived about 30 minutes later than I normally do at the golf course. I really tried to stay composed during the tournament, during the round, and I'm happy that I got it done."

The tournament was delayed three months because of the coronavirus pandemic, landing its final round smack on a packed sports Sunday. The PGA of America had to get creative with the tee times with NBC having other programming commitments on the weekend and the leaders — including Kim — teed off at 8:49 a.m.

Founded in 1896, Aronimink has hosted a number of significant golf events during its storied history, including the 1962 PGA Championship won by Gary Player. Aronimink's golf course was designed by Donald Ross in 1926 and is off the major schedule until the PGA Championship in 2026.