BOCAUE, Bulacan – This Azkals team is for real.

Fielding what is regarded as the strongest squad ever assembled, the Philippine men’s football lived up to the hype as it stunned a fancied Bahrain side, 2-0, for an auspicious start to its Fifa World Cup Qualifiers campaign on Thursday night at the Philippine Stadium.

The Azkals buckled down defensively to hold the Bahrainis scoreless in the first half, before turning up their offense behind goals by Misagh Bahadoran and Javier Patiño early in the second half to score the shutout victory before a compact, but loud partisan crowd at the 20,000-seat venue.

New recruits Stephan Palla and Iain Ramsay were also good as advertised, Phil Younghusband thrived in a midfield role, while returnee Neil Etheridge shone as the last line of defense that not even a late goal by the Bahrainis could dampen the win.

“It was team effort today,” Azkals coach Thomas Dooley said. “I’m very happy of the result. We worked so hard and nobody had a bad day.”

It was a remarkable result for the Filipino booters, who the Bahrainis had mastered in their previous meetings, the most recent a 2-1 decision in their friendly last March in the Middle East country.

“I was always saying that somehow we will pull off surprises in this round and I’m happy that we pulled off one tonight,” said team manager Dan Palami, whose 137th-ranked squad is placed 31 spots below Bahrain in the world rankings.

The Azkals have little time to rest as they fly to Qatar on Friday ahead of face their next match in Group H against Yemen on June 16 at the Qatar Sports Club in Doha.

One dampener was an early injury to Stephan Schrock as the midfield dynamo came off in the 23rd minute to be replaced by Bahadoran, who repaid Dooley’s faith.

The Filipino-Iranian winger provided the spark off the bench five minutes into the second half when he flicked a cross from Younghusband.

Nine minutes later, Patiño struck off the rebound from a shot off a left-side corner as the Azkals held the fort from there until Bahrain sneaked in an inconsequential goal four minutes into stoppage time by Abdulwahab Al Malood. 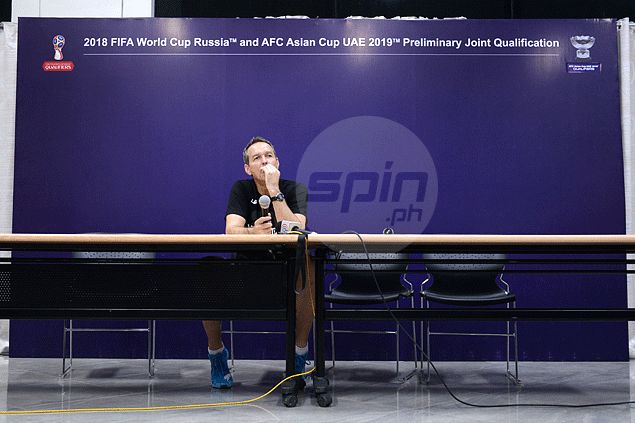