CAN the Volcanoes climb the tallest of mountains?

A Philippine rugby team that's slowly gaining prominence in the country aims to conquer greater heights as it faces some of the world’s best squads in its Rugby World Cup Sevens debut in Russia next week.

Coming off a notable showing in the Asian Five Nations competition where they stayed in the top flight of the continent's Rugby Union last month, the Volcanoes embark on a grander expedition this time, with their sevens squad representing the country and bracketed in Pool C with Samoa, Kenya, and Zimbabwe.

Samoa is ranked fourth in the world, Kenya fifth, and Zimbabwe 17th. The Philippines is ranked third in Asia in the sevens division and clinched a berth after beating South Korea to finish third in the qualifiers last November behind Japan and Hong Kong.

“By looking it on paper, we have Mount Everest. But that’s why Mount Everest exists and that’s why the game is played because we want to turn that paper,” PH rugby sevens coach Al Caravelli said in the press launch of the Volcanoes’ campaign on Wednesday.

“We believe we have a great chance as anybody,” added the American mentor, who then painted a picture by saying that defending champion Wales had never reached a World Cup final before winning it all in 2009.

Wales is now in Pool E, considered the “Group of Death” with Fiji, Tonga, and Uruguay.

Only the top team emerging from each group is guaranteed a spot in the finals where it will face the topnotchers from the other five pools as well as the two best second-placed squads.

“They have a lot of different attacking options,” said the PH mentor, who likes his team’s prospects better against Kenya.

“Kenya is one-dimensional. They just use power and run you over and finish with speed, so if we can stop them from running, take away their legs, I like our chances.”

The Volcanoes have already met Zimbabwe last year where it lost a close 17-12 decision in a game that was only decided within the last 30 seconds when the Filipinos’ opponents scored on a long-range try.

The Filipinos, who have been training in their new facility in Calamba, Laguna, near the Silangan exit of the South Luzon Expressway in the last few weeks, leave for Moscow on June 23, five days before the start of the group stage of the tournament, which is the premier rugby sevens competition featuring the top 24 teams in the world.

Rugby sevens is a faster, more exciting version of Rugby Union, which plays 15 men per side. The full-contact sport has been calendared in the Asian Games since 1998 and will make its Olympic debut in 2016 in Rio. 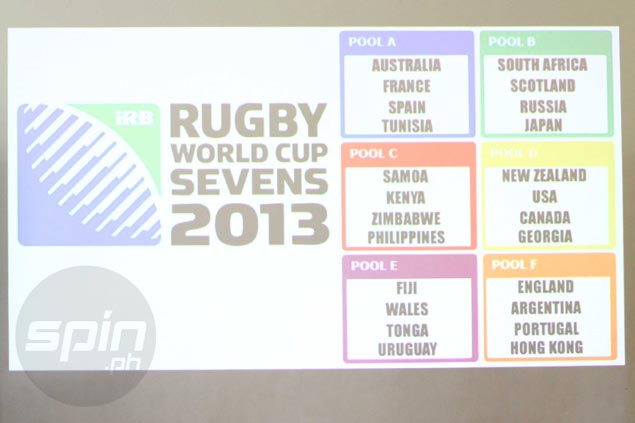