MADRID — Karim Benzema scored twice and Marco Asensio added another on his return from a 10-month injury layoff as Real Madrid beat Valencia 3-0 on Thursday (Friday, Manila time) to keep pace with leader Barcelona in the Spanish league.

The home win left Madrid two points behind Barcelona, which defeated Leganés 2-0 on Tuesday for its second straight win after the pandemic break.

Madrid took control of the match after a lackluster first half in which Valencia had the most significant scoring chances and a goal disallowed by video review.

Benzema opened the scoring in the 61st minute after a pass by Eden Hazard, who again was decisive for Madrid in his second match after a long injury layoff.

Asensio, making his first appearance since a serious knee injury last year, scored with his first touch about 30 seconds after entering the match in the 74th.

"That's the way to come back," his teammates could be heard saying during the goal celebration at the empty Alfredo Di Stéfano Stadium.

"I couldn't wait to come back after so many months of hard work," said Asensio, who was injured in a friendly last July. "I'm glad that I'm back and that I was able to score." 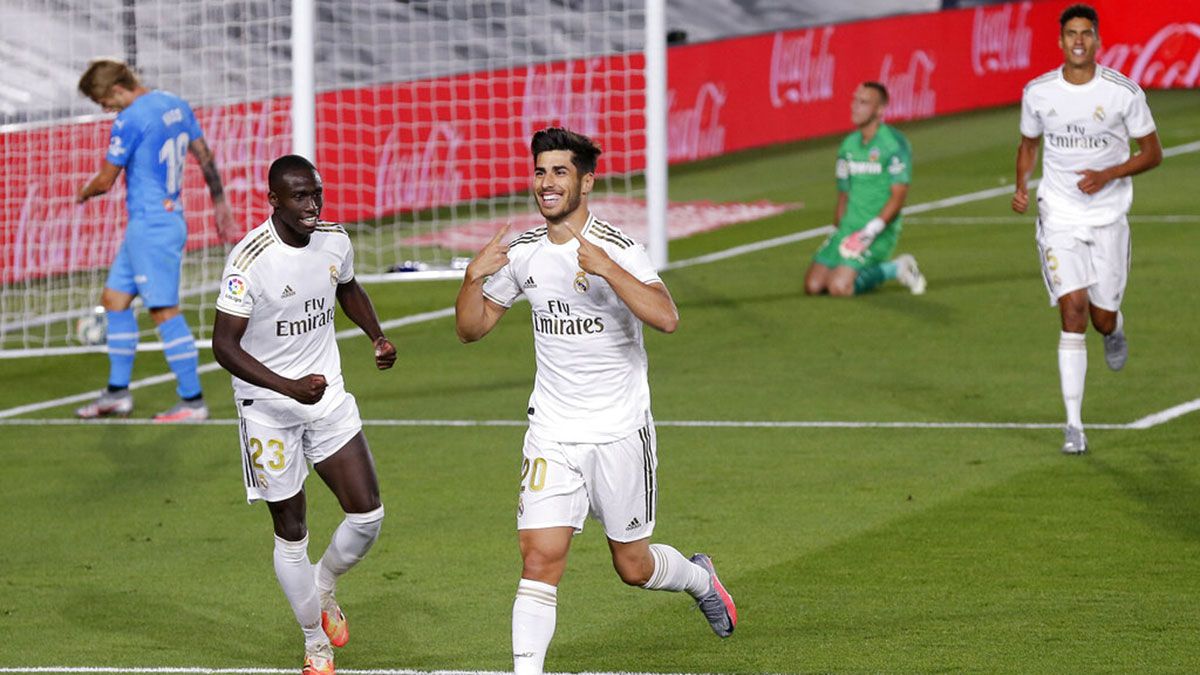 Fit-again Marco Asensio celebrates after finding the back of the net.

Asensio also set up Benzema's third goal with a one-touch cross on a counterattack and the French striker finished off the move sublimely — using his right foot to flick the ball away from a defender and then his left to hammer it into the top of the net. It was the Frenchman's 16th league goal to leave him five behind scoring leader Lionel Messi. It was the fifth double this season for Benzema, who passed Ferenc Puskas to become Madrid's fifth leading scorer all-time.

Valencia went a man down in the 89th after a straight red card was shown to South Korean midfielder Lee Kang-in for a foul on Madrid defender Sergio Ramos. A few moments later, midfielder Francis Coquelin had to leave injured after the team had already made all five substitutions.

Valencia is winless after the break and dropped to eighth place. It had the best chances early on, with Rodrigo hitting the far post after a breakaway in the 14th. His goal a few moments later was disallowed by video review after a close offside call.

It was Madrid's second straight game at its training center, which is being used while the Santiago Bernabéu Stadium remains under renovation until the end of the season.

Real Sociedad failed to regain fourth place after a 2-0 loss at Alavés in which it couldn't get a single shot on target.

Borja Sainz opened the scoring with a goal awarded following video review in the 56th, and Martín Aguirregabiria sealed the victory deep in stoppage time at the Mendizorroza Stadium.

A victory would have sent Sociedad past fourth-place Atlético Madrid, which won 5-0 at Osasuna on Wednesday. It stayed in sixth instead, two points from the final Champions League spot.

Sociedad went a man down in the 81st as defender Joseba Zaldúa was sent off with a second yellow card, but Alavés was also reduced to 10 men six minutes later when midfielder Tomás Pina was shown a second yellow.

Sociedad had won four of its last five league games before the break, with its only setback a loss at Barcelona. Its first match after the league resumed was a 1-1 draw against midtable Osasuna at home.

"We didn't play our best today, and we hadn't played our best in the previous match either," Sociedad midfielder Igor Zubeldia said. "We need to improve for our next match."