DON’T tell the Philippine Aguilas that Filipinos don’t have what it takes to play American football.

The Aguilas will take on the Australian Raiders in a friendly game at the Emperador Stadium, McKinley Hill in Fort Bonifacio this Saturday - the first international friendly of American football to be held in the country.

The 1 p.m. match should give the national team plenty of experience as it prepares for the 2016 International Federation of American Football (IFAF) Asian official games.

Organizers said the match is the first test run of the I Am Pilipinas Aguilas Club Training (ImPACT) Pool program, the centerpiece of development efforts for promoting tackle football in a country where basketball is king.

The American Tackle Football Association of the Philippines (ATFAP), recognized by the Philippine Olympic Committee, arranged the match.

Under the program, any Filipino or foreigner can register and be part of the pool and undergo training to develop their individual fundamentals and skills under the Aguilas.

Organizers said that requirements are basically a Philippine passport, to be physically fit, at least 18 years old and have a passion to play American football.

The objective is to invite players, coaches, referees (both Pinoys and non-Pinoys) with football experience at the high school to pro level that will then help train the Aguilas.

Part of the training will be for both Filipinos and foreigners to play side by side in either a local mix-up game or an international friendly.

Another initiative is the planned formation of an all-foreigner team within the Aguilas Club that will be called the Day-U-Won (The day you won… against foreigners), a play on the Tagalog word dayuhan (foreigners). The Day-U-Won team will test the Filipinos in an annual football game.

Ivan Kleric, Aguilas co-coach, said, “If you are in a competitive environment, you play to win. We are trying to build a culture of football. Do the basic stuff in a fundamental game to get better - this would allow you to play at a higher, competitive level.”

Aguilas coach Will Yeh said: “At the end of the day what we are trying to do is build experience for the sport.”

ATFAP director JJ Cocjin said, “Most of us learned from watching football on television. We learned the plays from video games.”

Cocjin, who is also an offensive lineman for the Aguilas, said “There is a misconception that football is a game of brutes but if you break it down it’s really like real-life chess match with many different variables.”

Defensive back JR Diangkinay said he and his teammates are not dissuaded by their lack of size and physique by playing with heart and ferocity.

“It’s all about heart. You don’t need to be the biggest guy out there. There is no other sport like it. On the field it’s indescribable - you have your brothers watching your back and for me this is something Filipinos can easily relate to,” he said.

On Sunday August 17, ATFAP will also have a free open football clinic at the Emperador Stadium from 10 a.m. to 2 p.m. to be led by the Aguilas and the Raiders.

With the team members footing the bill, the Aguilas flew to Japan last April for a qualifying game against Japan in Tokyo last April. 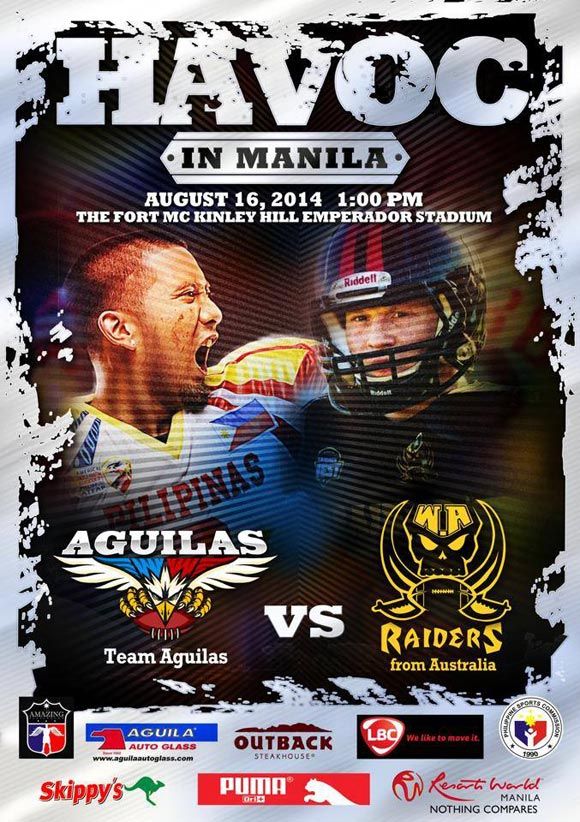