Dooley's fate, luck of the draw to have big impact on Azkals ahead of Asian Cup

THE Philippine Azkals are back on the map after getting a historic berth in the 2019 Asian Cup last Tuesday with a 2-1 win over Tajikista. Excitement filled the air for fans of the beautiful sport.

But what can we expect from the Azkals heading into United Arab Emirates on January?

It all starts with a favorable draw. The drawing of lots for the largest continental tournament in Asia is set on May 4 in Dubai where the 24 nations qualified will be bracketed into six separate groups.

The 24 countries will be divided into four pots, with the Fifa rankings and points determining the seeding of the countries in the pots. Each of the six teams in the first pot will be drawn from Group A to Group F, and will be followed by teams from pots No. 2 to 4 to complete draw.

With a Fifa ranking of 122, the Philippines will be at Pot 4 alongside Bahrain, Jordan, Yemen, Southeast Asian powerhouse Thailand, and Turkmenistan.

Pot 1 will be filled with powerhouse and the Azkals can be grouped with either hosts UAE, Iran, Australia, Japan, South Korea and Saudi Arabia.

China is obviously the team to avoid in Pot 2, especially after the 8-1 beating the Azkals received last year. Joining the Chinese in that pot will be Kyrgyzstan, Syria, Lebanon, Palestine and Oman. Familiar foes in Vietnam, North Korea, Uzbekistan and India will be in Pot 3 alongside 2022 World Cup host Qatar and Iraq.

The top two teams of each group and the four best third-placed teams will advance to the round of 16 knockout stages.

But before the Asian Cup next year, there’s one big decision that needs to be made moving forward.

Azkals head coach Thomas Dooley’s contract is set to expire at the end of the month and things still aren’t clear if the former US men’s national team captain will be staying put.

Dan Palami, the squad’s main benefactor, has repeatedly said that he’s not about to judge Dooley’s performance based on the game against Tajikistan alone, which means the future of the outspoken head coach remains in the balance, regardless of the Asian Cup ticket.

“It would be unfair to judge him just based on this game. This is a big result for us. We take a holistic result and it’s difficult to make commitments when you’re really happy,” Palami said right after the match.

“We have to approach that objectively and see where we want to go. We could be with him, of course. He contributed a lot but I’d rather not say about it now,” he added.

Dooley has become a polarizing figure in the Philippine football community. Sure, the buzz around the qualification has taken the heat off him, but there’s a reason why Palami and the PFF remains non-committal about Dooley’s possible return.

While the progress of the country under Dooley remains undeniable, a lot of that can also be credited to the quality of players that came in during his watch compared to the time of his predecessor, Michael Weiss.

Has Dooley done his job? With an Asian Cup qualification, it’s hard not to say yes. But is the future of the national team better off in his hands? That’s a question that the Azkals higher-ups can only answer and it’s something that they need to decide on quick. 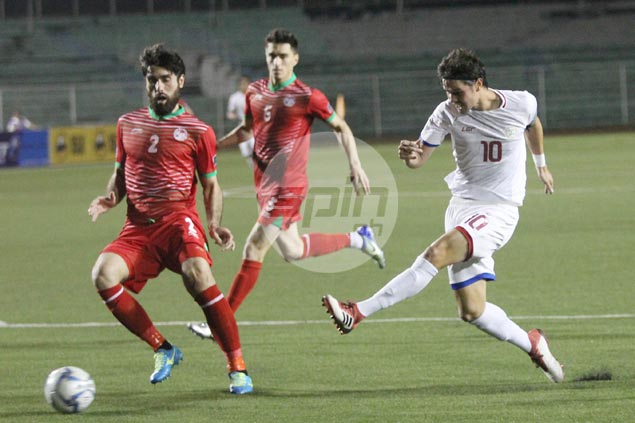 The Asian Cup isn’t the only major tournament to look forward to for the Azkals. In November, the Philippines is set to compete in the AFF Suzuki Cup, eight years after making a name for themselves in the tournament.

In 2016, the country failed to qualify for the knockout stages after being put in the group of death with Thailand, Indonesia and Singapore and it’s a hump that they need to go over this year.

The Philippines is one of just three Southeast Asian nations that will be competing in the Asian Cup and a breakthrough in this tournament will further cement its status as one of the top teams in the region.

The closest the Azkals got to a finals appearance was back in 2012 when they lost to eventual champions Singapore in the semifinals, 1-0, on aggregate.

If they truly want to keep their momentum going heading into the grandest stage of football in Asia, then getting one Suzuki Cup title would be the perfect way to do it.